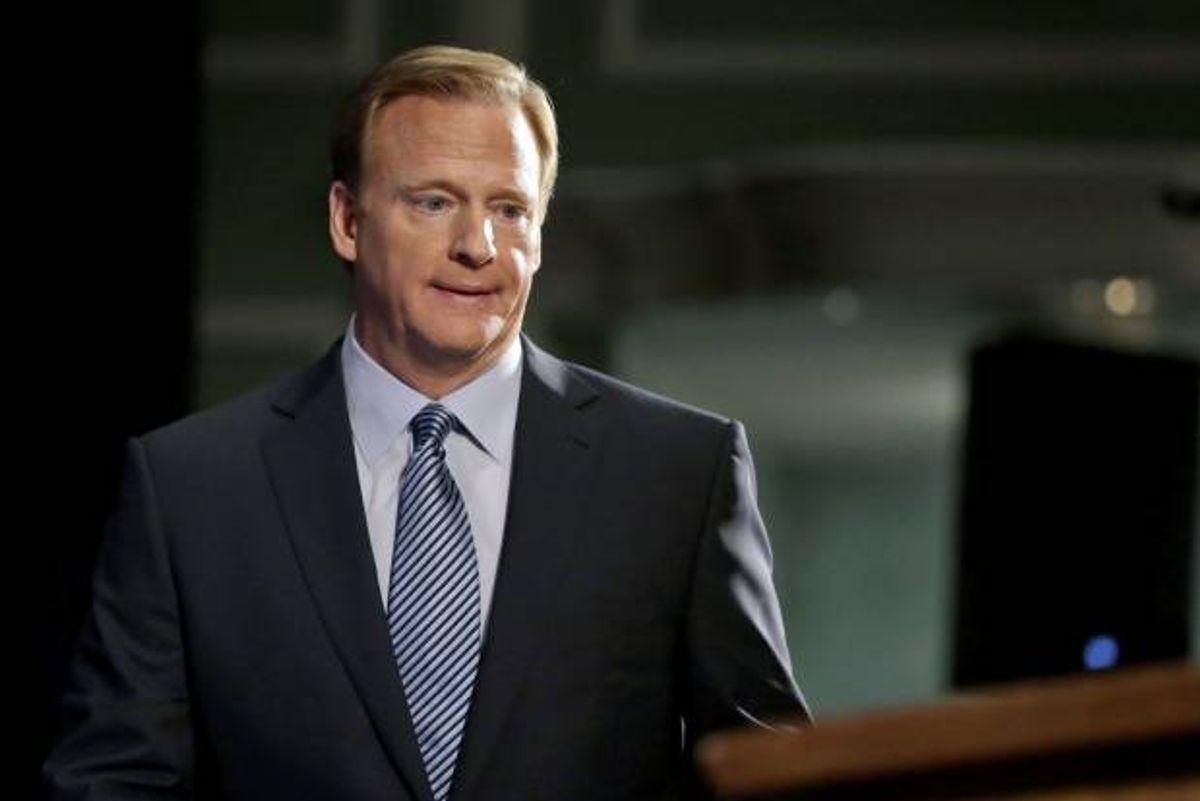 If you're like many Americans (myself included), besides being the time for hitting the grocery store and binging on Netflix, the weekend is when you put away your #Goodellmustgo hashtags, set aside your boycott-the-NFL think pieces and hunker down for hour after hour of NFL-provided entertainment. So you probably missed this little story from ESPN's Chris Mortensen on Sunday, which reported that Minnesota Vikings' superstar running back Adrian Peterson is "in denial about his future" following his recent indictment for child abuse. And since it embodies much of what's wrong with NFL leadership, as well as those members of the media most dependent on its good graces, perhaps the story's odd timing is not entirely incidental.

The basic thrust of Mortensen's article is that Peterson, who was charged with severely beating his 4-year-old child with a wooden switch, doesn't "get it." According to unnamed sources within the Vikings and the NFL, Mortensen reports, Peterson still thinks the fact that he did not consider his actions outside the norm, that he's been cooperative and contrite, and that he has no prior history of legal problems or other controversy, means that he'll eventually be able to return to the field and all-star status. Much more likely, say these sources, is that Peterson's Hall of Fame-worthy career is now prematurely kaput.

I’m not much in the habit of defending people who text lightly about “tearing that butt up” in reference to physically damaging children, but all the same I think it’s necessary to call this alleged plan of the NFL’s out for what it is: a reckless, cynical and indefensible attempt to crucify Adrian Peterson for the league's own sins. The good or bad news, depending on your psychological inclination, is that it will only work if the media lets it.

To lay my “ideological priors,” as Nate Silver would call them, out on the table, let me start by saying that I am a pretty typical temperamental anti-authoritarian and cannot imagine any situation in which I’d find striking a child — be it with a switch, a rod or an open palm — morally acceptable. Moreover, my parents were pretty damn lax throughout my upbringing (I can only recall being spanked once, and I remember it as an extremely brief and halfhearted effort), but just like the countless numbers of people who’ve taken to the Internet as of late to defend their parents’ hitting them, I consider myself to have nevertheless turned out relatively all right. At the very least, I don’t think that whatever problems I have now would’ve been cut off at the source if only my parents had spent more time trying to cause me pain.

So beyond being a casual football fan who holds the universally shared opinion that Peterson is an excellent player, I don’t come to this carrying a defense of him or Southern-style parenting (Peterson’s from Texas) or corporal punishment in general. But as mistaken and noxious as I find Peterson’s previous understanding of parenting to be, I can’t help echoing a sentiment expressed this weekend by the Atlantic’s Ta-Nehisi Coates, who wondered whether the league’s reported decision to throw the book at Peterson really did any good for anyone — besides embattled commissioner Roger Goodell:

As Coates went on to note, experts in the field of domestic violence have questioned whether a punitive model, like the one the NFL is reportedly considering, is actually more effective at stopping abuse and healing the abused than less simplistic and more rehabilitative-focused models. It’s a question that our society at large must do better at confronting; but it’s also one that is especially relevant in the case of Peterson, who appeared to consider himself as something of a corporal punishment moderate, incredulously telling Houston police he’d “never” use an extension cord to “discipline” his child, because he remembered all too well from his own childhood how much a “whooping” from one would hurt.

As Roger Goodell himself once argued (when someone else was in the dock), ignorance is no excuse. But if the league were as devoted to changing our culture’s tacit acceptance of domestic violence as it would now have us believe, wouldn’t it be better for it to hand down a reasonable, considered punishment against Peterson (maybe officially suspend him for half of this current season) while also strongly encouraging him to devote significant chunks of his time and money -- after education and a rehab process -- to being a spokesperson for the issue? Wouldn’t it do better to give Peterson the chance to show he’s learned from his mistakes and help others not to make them?

The answer to these questions is rather obviously yes. But the stumbling block, of course, is the stubborn and unpleasant fact that the NFL cares as much about domestic violence as it does women’s rights, LGBT equality and its players’ long-term health: enough to recognize it’s a threat to the league’s profits, but not one iota more than that. Unless the media is willing to keep calling out Goodell and company’s transparently disingenuous attempts to turn its serious institutional and cultural pathologies into mere P.R. snafus, the NFL will do its damnedest to sweep Adrian Peterson — from whom it’s already wrung enormous wealth — quickly under the rug. And if Peterson never “gets it” and never gets better, well, that’ll just be his family’s problem.