The 7 worst misreadings of what feminism means 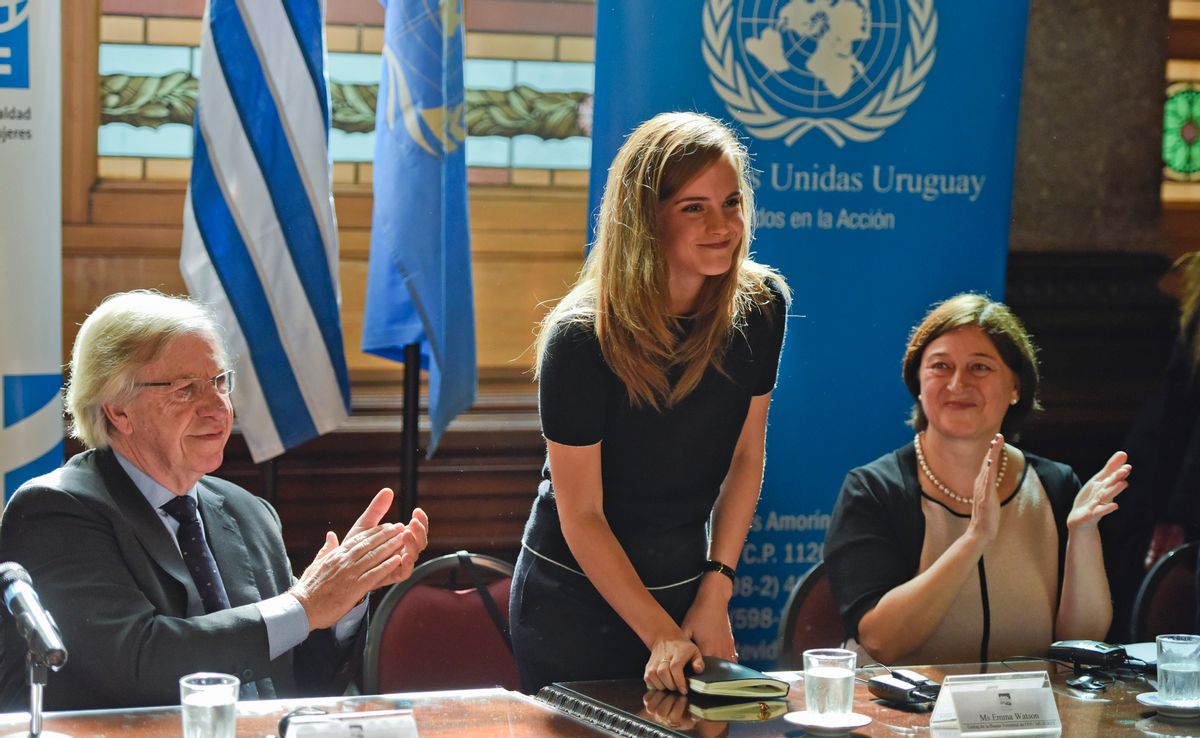 Over the weekend, "Harry Potter" star Emma Watson became doubly famous -- this time for her role as U.N. activist, thanks to an incredible, powerful speech delivered at the U.N. Headquarters in New York.

"I decided I was a feminist and this seemed uncomplicated to me," said the actress while discussing the new "HeForShe" campaign. "But my recent research has shown me that feminism has become an unpopular word. Apparently I am among the ranks of women whose expressions are seen as too strong, too aggressive, isolating, anti-men and, unattractive."

"Why is the word such an uncomfortable one?" she asked. While Watson credited people in her life who supported her autonomy and valued her as an individual, not everyone has these "inadvertent feminists" in her life. She went on to tackle some of the greatest myths about and misreadings of feminism. Which include:

In an interview with Bust, Bjork said:

Bust: So you feel the term "feminism" is equated with complaining?

Bjork: A lot, yes. You could probably call my mother a feminist, and I watched her isolate herself all her life from men, and therefore from society.

Bust: You believe she isolated herself from men because of feminism?

Bjork: Obviously, I can't take her as an example of all feminists, but I find for my generation, it's important to do things instead of just complaining that things are not right. It's important to collaborate with both males and females and to be positive.

Thanks, Bjork! Needless to say, asserting that feminism is inherently "complaining" does no favors to the movement and to people who believe in a woman's right to make her own decisions.

Feminism is a label that will "shut down the world"

Actress Melissa Leo is one of several female public figures who won't lend her name to the cause. She told Salon in 2012:

Well, I don’t think of myself as a feminist at all. As soon as we start labeling and categorizing ourselves and others, that’s going to shut down the world. I would never say that. Like, I just did that episode with Louis C.K.

(Leo is a strong, fierce woman regardless of her label. I'm sure many feminists see her as an icon and role model!)

Former Spice Girl Geri Haliwell in the Guardian in 2007: "It's about labelling. For me feminism is bra-burning lesbianism. It's very unglamorous. I'd like to see it rebranded. We need to see a celebration of our femininity and softness."

Invoking her favorite animal,"mama grizzlies," Sarah Palin made headlines in 2010 when she dropped the F-bomb, spurring the question: Can Tea Party women be feminists? The answer was: ehhhhhh ... sort of?

Pharrell Williams advocates for gender equality and supports women. But he won't go so far as to say he is a feminist because he is under the impression that men cannot be feminists. In a recent interview with the BBC, he said:

“I’ve been asked if I’m a feminist. I don’t think it’s possible for me to be that. I’m a man. I mean … it makes sense up until a certain point, you know? But I do support feminists. I do think that there’s injustices, there’s inequalities that need to be addressed.”

Watson, in her speech, offered a perfect response:

Men—I would like to take this opportunity to extend your formal invitation. Gender equality is your issue too. Because to date, I’ve seen my father’s role as a parent being valued less by society despite my needing his presence as a child as much as my mother’s.

I’ve seen young men suffering from mental illness unable to ask for help for fear it would make them look less “macho”—in fact in the UK suicide is the biggest killer of men between 20-49; eclipsing road accidents, cancer and coronary heart disease. I’ve seen men made fragile and insecure by a distorted sense of what constitutes male success. Men don’t have the benefits of equality either.

In 2014, actress Shailene Woodley gave a sort of feminist response but would not identify herself as a feminist because she was under the impression that the movement hates men. When asked by Time if she was a feminist, she said:

No because I love men, and I think the idea of ‘raise women to power, take the men away from the power’ is never going to work out because you need balance. With myself, I’m very in touch with my masculine side. And I’m 50 percent feminine and 50 percent masculine, same as I think a lot of us are. And I think that is important to note. And also I think that if men went down and women rose to power, that wouldn’t work either. We have to have a fine balance.

Maybe in a few years she'll come out as a feminist, Taylor Swift-style.

One of the greatest misconceptions about feminists, from #WomenAgainstFeminists, is that feminists are asking for handouts:

Sure, I guess you could say it's a testament to the feminists who fought for women's suffrage that mere decades later some women believe they don't need (or want) feminism at all. But judging by the sexual assault crises in our colleges and the military (for men, too), the persistent pay gap, and the constant fight over female reproductive rights, feminism is still doing its work. As my colleague Katie McDonough points out, feminism is working on behalf of these women whether they want it to or not.