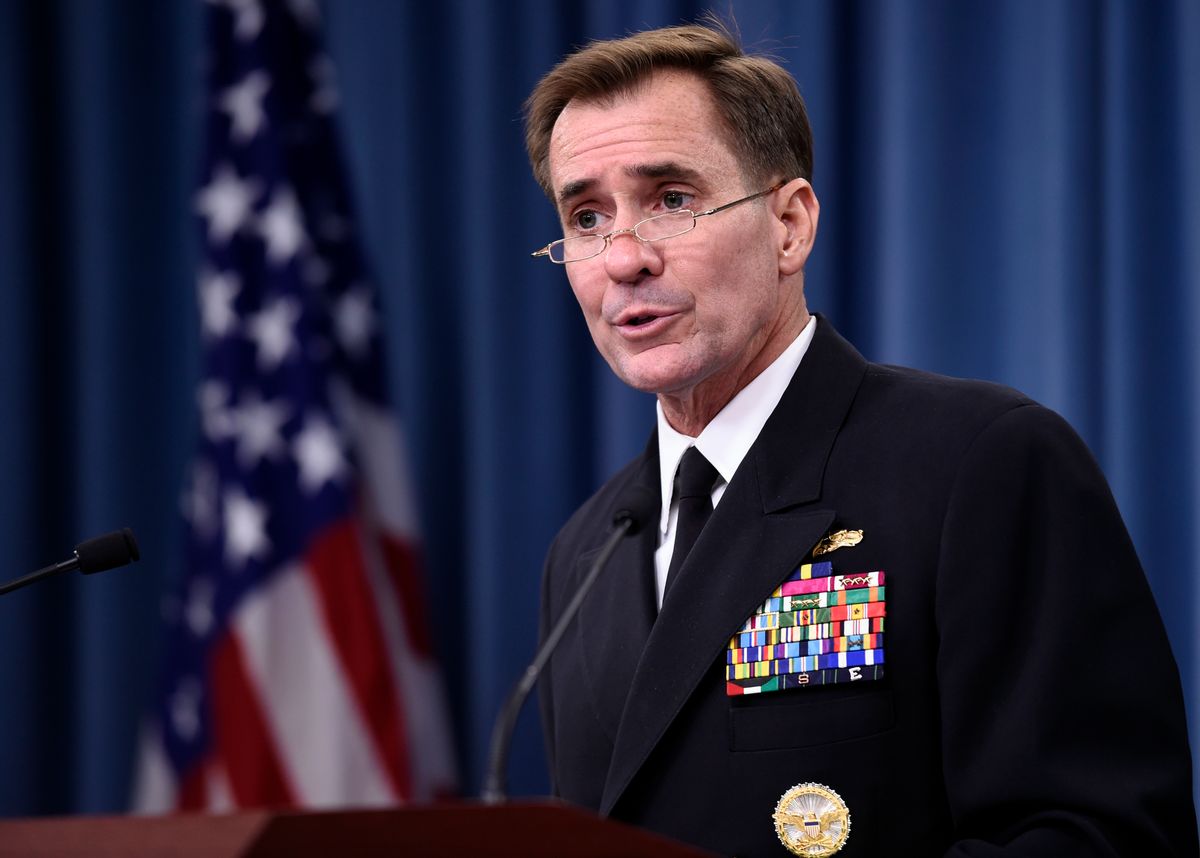 FILE - In this Sept. 2, 2014, file photo, Pentagon press secretary Navy Rear Adm. John Kirby speaks during a briefing at the Pentagon. The Pentagon on Monday night, Sept. 22, says the U.S. and partner nations have begun airstrikes in Syria against Islamic State militants, using a mix of fighter jets, bombers and Tomahawk missiles fired from ships in the region. Kirby says that because the military operation is ongoing, no details can be provided yet. He says the decision to strike was made early Monday by the military. (AP Photo/Susan Walsh, File) (AP)
--

WASHINGTON (AP) — The U.S. and five Arab countries launched airstrikes Monday night on Islamic State group targets in eastern Syria, and the U.S. undertook a separate, unilateral air attack on what it called an al-Qaida affiliate elsewhere in Syria.

Several hours after the Pentagon announced the airstrikes against Islamic State targets, U.S. Central Command said American warplanes launched eight airstrikes "to disrupt the imminent attack plotting against the United States and Western interests" by a network of "seasoned al-Qaida veterans" — sometimes known as the Khorasan Group — who have established a haven in Syria. It provided no details on the plotting.

Central Command said that separate bombing mission was undertaken solely by U.S. aircraft and took place west of the Syrian city of Aleppo. It said targets included training camps, an explosives and munitions production facility, a communication building and command and control facilities.

The airstrikes against Islamic State targets were carried out in the city of Raqqa and other areas in eastern Syria by a mix of manned aircraft — fighter jets and bombers — plus Tomahawk cruise missiles and drone aircraft. The strikes were part of the expanded military campaign that President Barack Obama authorized nearly two weeks ago in order to disrupt and destroy the Islamic State militants, who have slaughtered thousands of people, beheaded Westerners — including two American journalists — and captured large swaths of Syria and northern and western Iraq.

In its written statement detailing the operation, Central Command said the airstrikes, which officials said began around 8:30 p.m. EDT, were conducted by the U.S., Bahrain, Qatar, Saudi Arabia, Jordan and the United Arab Emirates. It said the five Arab partner countries "participated in or supported" the airstrikes against Islamic State targets. It was not more specific.

The first wave of strikes finished about 90 minutes later, but the operation was expected to continue for several more hours, according to one U.S. official, who spoke on condition of anonymity because he was not authorized to speak publicly by name about an ongoing mission.

Syria's Foreign Ministry said the U.S. informed Syria's envoy to the U.N. that "strikes will be launched against the terrorist Daesh group in Raqqa." The statement used an Arabic name to refer to the Islamic State group.

At a conference on Sept. 11 with Secretary of State John Kerry, key Arab allies promised they would "do their share" to fight the Islamic State militants. The Obama administration, which at a NATO meeting in Wales earlier this month also got commitments from European allies as well as Canada and Australia, has insisted that the fight against the Islamic State militants could not be the United States' fight alone.

Activists said the airstrikes hit targets in and around the Syrian city of Raqqa and the province with the same name. Raqqa is the Islamic State group's self-declared capital in Syria.

Rami Abdurrahman, who heads the Britain-based Syrian Observatory for Human Rights, told The Associated Press, "There is confirmed information that there are casualties among Islamic State group members."

He added that missiles also targeted the towns of Tabqa, Ein Issa and Tel Abyad, as well as the village of Kfar Derian, which is a base for the al-Qaida-linked Nusra Front, a rival of the Islamic State group.

Another activist, Mohammed al-Dughaim, based in the northern Syrian province of Idlib, confirmed that several airstrikes hit Kfar Derian in the early hours of Tuesday. He said there were civilians among the casualties.

An amateur video posted online Tuesday shows explosions going off at night in an open area, blasts that are said to be from coalition airstrikes. The narrator in the video is heard saying that the footage shows the "bombardment of the Kfar Derian village."

The head of the main Western-backed Syrian opposition group, Hadi Bahra, welcomed the commencement of airstrikes in Syria.

"Tonight, the international community has joined our fight against ISIS in Syria," he said in a statement, using an alternate acronym for the Islamic State. "We have called for airstrikes such as those that commenced tonight with a heavy heart and deep concern, as these strikes begin in our own homeland. We insist that utmost care is taken to avoid civilian casualties."

Army Gen. Martin Dempsey, chairman of the Joint Chiefs of Staff, told senators last week, "This won't look like a shock-and-awe campaign, because that's simply not how ISIL is organized, but it will be a persistent and sustainable campaign." ISIL is another acronym for the Islamic State group.

Defense Secretary Chuck Hagel said the plan "includes targeted actions against ISIL safe havens in Syria, including its command and control logistics capabilities and infrastructure." He said he and Dempsey approved the plan.

The U.S. has also been increasing its surveillance flights over Syria, getting better intelligence on potential targets and militant movements. None of Monday's airstrikes were from drones.

Military leaders have said about two-thirds of the estimated 31,000 Islamic State militants were in Syria.

Some officials have expressed concern that going after Islamic State militants in Syria could inadvertently help Syrian President Bashar Assad, since the militants are fighting in part to overthrow Assad.

In a speech Sept. 10, Obama vowed to go after the Islamic State militants wherever they may be. And his military and defense leaders told Congress last week that airstrikes within Syria are meant to disrupt the group's momentum and provide time for the U.S. and allies to train and equip moderate Syrian rebels.

The U.S. military has been launching targeted airstrikes in Iraq since August, focusing specifically on attacks to protect U.S. interests and personnel, assist Iraqi refugees and secure critical infrastructure. Last week, as part of the newly expanded campaign, the U.S. began going after militant targets across Iraq, including enemy fighters, outposts, equipment and weapons.

To date U.S. fighter aircraft, bombers and drones have launched about 190 airstrikes within Iraq.

Urged on by the White House and U.S. defense and military officials, Congress passed legislation late last week authorizing the military to arm and train moderate Syrian rebels. Obama signed the bill into law Friday, providing $500 million for the U.S. to train about 5,000 rebels over the next year.

U.S. leaders have also been crisscrossing the globe trying to build a broad international coalition of nations, including Arab countries, to go after the Islamic State group and help train and equip the Iraqi security forces and the Syrian rebels.

The militant group, meanwhile, has threatened retribution. Its spokesman, Abu Mohammed al-Adnani, said in a 42-minute audio statement released Sunday that the fighters were ready to battle the U.S.-led military coalition and called for attacks at home and abroad.