The Dick Cheney view of presidential power is winning

Feckless Congress campaigns instead of voting on Syrian airstrikes, while McCain and Graham want to move on Assad 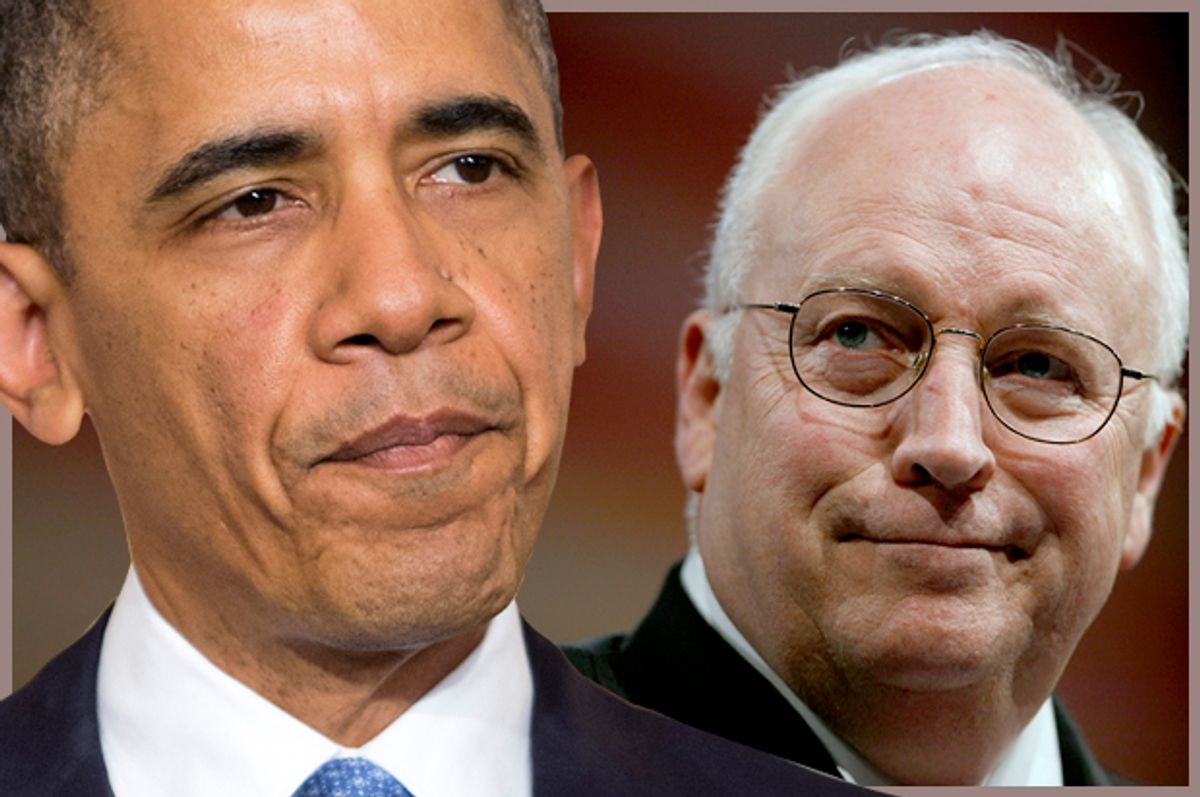 President Obama warned earlier this month that he intended to use airstrikes in Iraq and Syria to “degrade and destroy” ISIS. Immediately the New York Times as well as legal scholars shrieked that the president needed to seek authorization of any Syria strikes from Congress. "Nothing attempted by his predecessor, George W. Bush, remotely compares in imperial hubris," wrote Yale law professor Bruce Ackerman.

But Congress shrugged. After voting to fund the training of Syrian rebels, both the Senate and the House departed to campaign in the 2014 midterms.

Now that the bombs are dropping, few in Congress are even bothering to argue that they ought to deal with the question when they get back after the election. Sen. Tim Kaine is an exception: he is accusing his colleagues of accepting Dick Cheney’s view of the president’s power to wage pre-emptive war.

"[Congress has] sort of allowed the Cheney pre-emptive war doctrine to exist by another name," Kaine told the Huffington Post Tuesday. "In this instance, they allowed the president to say, 'ISIL [the Islamic State] is the bad guys, and I can go after them even though there has been testimony that they pose no imminent threat of attack on the United States.' If the president just gets to do this without Congress, then we will be embracing the Cheney pre-emptive war doctrine, which I think is just brutally wrong."

Smith and Kaine are right, and the relative silence from Congress in the wake of last night’s airstrikes is troubling.

The Obama administration has insisted that action against ISIS, whether in Syria or Iraq, is justified by the 2001 and 2002 congressional authorization of military force against al Qaida and Saddam Hussein. ISIS “is the true inheritor of Osama bin Laden’s legacy,” a White House official told the New York Times in response to written questions. Of course ISIS and al-Qaida are themselves enemies, which undermines that argument.

The White House insists it doesn’t need U.N. or Syrian approval, eiher, presumably because it has now declared that it was striking a group we hadn’t known about until last week, Khorasan, an al-Qaida offshoot, which is reportedly preparing “imminent” operations in the U.S. and Europe.

While Syria didn’t approve the airstrikes, it didn’t defend against them either after being notified they were planned. Still, allies like Russia and Iran say the U.S. effort was illegal without either Syrian or U.N. Security Council approval. The U.S. can say the existence of an “imminent” threat made a defensive strike legal under international law. Of course, 10 days ago U.S. officials assured Congress that there was no “imminent” threat to the U.S.  That should bother Congress as well.

Nothing stops Congressional leaders from calling members back into session to debate the Syrian strikes – nothing except their desire to focus on winning the midterm elections, which time off the campaign trail plus a controversial vote would complicate. House Speaker John Boehner says he has no problem with the president’s strikes in Syria. Senators John McCain and Lindsey Graham, the relentless purveyors of more war, likewise praise Obama’s move – that’s rare for them -- but now want him to move on Bashar al Assad.

“The Administration…must recognize that it is neither effective nor moral to train and equip thousands of Syrians to fight ISIS, but make no commitment to defend them from Assad’s continued air strikes and barrel bombs,” McCain and Graham said in a statement. Noting that Obama threatened military retaliation if Assad interfered with Monday night’s airstrikes, they say the president should do the same if Assad continues to attack the “moderate” rebels we are backing to fight ISIS. Attacking Assad at the same time as ISIS would turn a chaotic country into bedlam.

GOP Congressman Jack Kingston, who’s on his way out of Congress after losing his Georgia Senate primary bid, spoke rare truth about his colleagues’ refusal to schedule a vote on the Syrian strikes before the midterms. ”A lot of people would like to stay on the sideline and say, ‘Just bomb the place and tell us about it later,’” said Kingston. “It’s an election year. A lot of Democrats don’t know how it would play in their party, and Republicans don’t want to change anything. We like the path we’re on now. We can denounce it if it goes bad, and praise it if it goes well and ask what took him so long.” (Kingston thinks Congress should vote on the airstrikes, but he told me Friday, on the set of “Real Time with Bill Maher,” that he doesn’t believe Obama needs authorization legally to act.)

With the president set to address the U.N. General Assembly, it’s a tense time for the U.S. to challenge international law. “In the aftermath of Russia’s clear violation of international law in Ukraine, we should be seen as committing further to the adherence of international norms, not undermining it,” the Center for American Progress’s Ken Gude, who has supported the anti-ISIS campaign in Iraq, told the Daily Beast.  “What could happen here is that the norms that govern states’ application of force take a hit and those norms, largely enforced by the U.S. and that work together for the benefit of America and our allies, could be weakened.”

These are all questions Congress should be asking, but very few in Congress seem to care. With military and civilian leaders saying the Syrian campaign could last not weeks or months but years, Congress needs to vote to authorize what is clearly a new war.