Protesters threw rocks and bricks at the police, resulting in at least three arrests 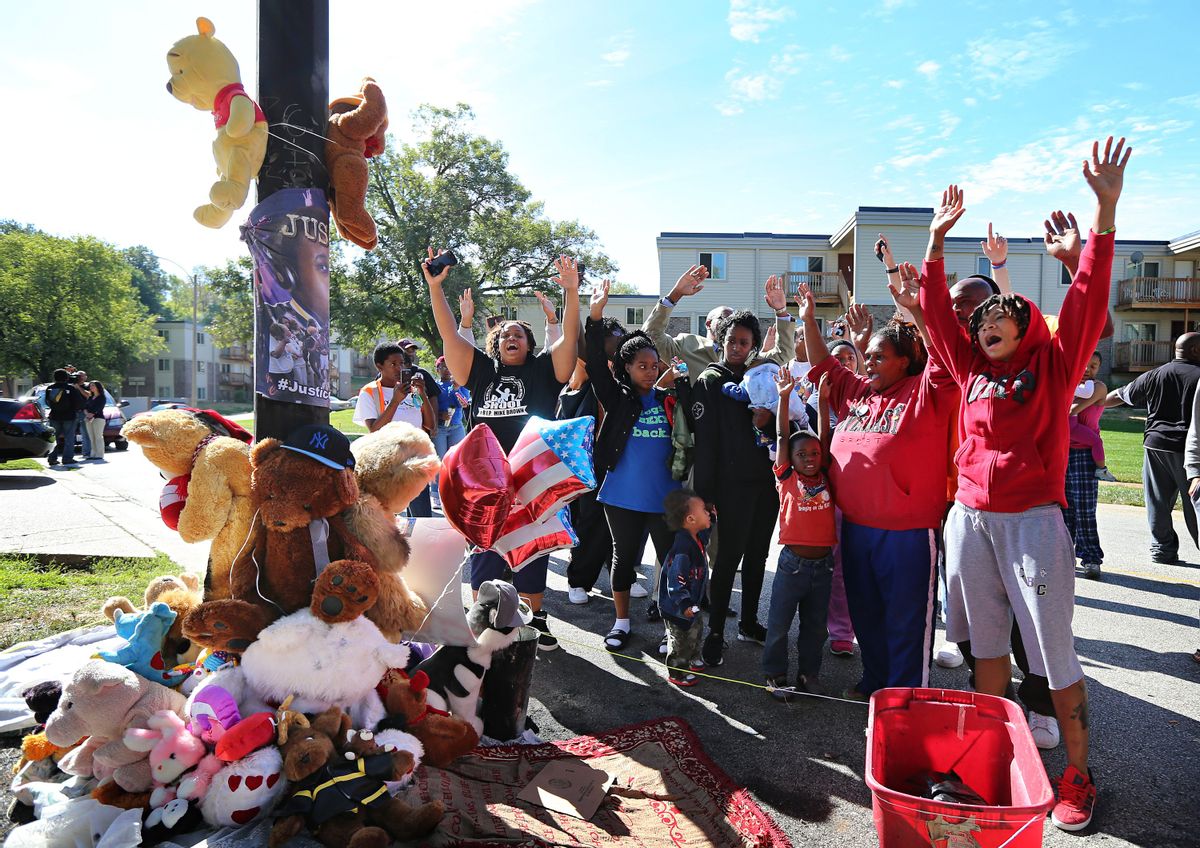 Protesters perform a "hands up, don't shoot" chant at a new teddy bear memorial on Tuesday, Sept. 23, 2014, in Ferguson, Mo., near the spot of where Michael Brown was shot by Ferguson police office Darren Wilson on Aug. 9. The original teddy bear memorial was destroyed by fire earlier Tuesday morning. Ferguson police spokesman Devin James says the cause of the fire is under investigation. (AP/St. Louis Post-Dispatch, David Carson)
--

After a memorial dedicated to slain teenager Michael Brown was found burning early Tuesday morning, tensions in Ferguson, Missouri, flared once again. Around 9 p.m. Tuesday evening, protesters gathered on Canfield Drive, where Brown was killed, and migrated to West Florissant Avenue where they broke into a store and had confrontations with police. As the protesters grew violent, rocks and bricks were thrown at police and at least three people were arrested.

Police responded Tuesday evening to a reported break-in of a beauty supply store on West Florissant Avenue, according to multiple reports. Then several gunshots were heard and approximately 200 people gathered at the site where demonstrations were held following the Aug. 9 shooting of Michael Brown, 19 [sic], by Ferguson police officer Darren Wilson.

St. Louis County Police Chief Jon Belmar and Missouri State Police Capt. Ron Johnson arrived on the scene near Beauty Town, and police pulled back from the crowds, putting a parking lot between the two groups.

Recalling the violence and damage done to businesses by looters in the wake of the Brown shooting, workers at the Ferguson Market and Convenience store next door to the beauty supply boarded up its windows.

This is the third time Beauty Town has been broken into since Brown's death, said Juan Santos, the store's manager, in an interview with the St. Louis Post-Dispatch. Santos said the windows had just been replaced last week, setting the business back $1,300. Referring to the boards now secured to the front windows, Santos said he "will probably leave them up for a while now."

At around 1 a.m., someone fired six shots near the entrance to the Canfield Green apartment complex, but the shooter was not pursued by police.

A grand jury is currently hearing evidence surrounding the death of Michael Brown and will make a decision about whether to indict Officer Darren Wilson with a crime. In a Wednesday morning interview, prosecuting attorney Robert McCulloch said that he expects the jury to come to a decision by the beginning of November.

On Tuesday, Attorney General Eric Holder said that the shooting of Brown has left the country at a pivotal moment regarding the way cops interact with minorities. "These tensions simmer every day in far too many communities across the country. The situation in Ferguson has presented leaders across the nation ... with a moment of decision, a moment of decision, a series of important questions that can no longer be avoided."