Who profits from our new war? Inside NSA and private contractors' secret plans 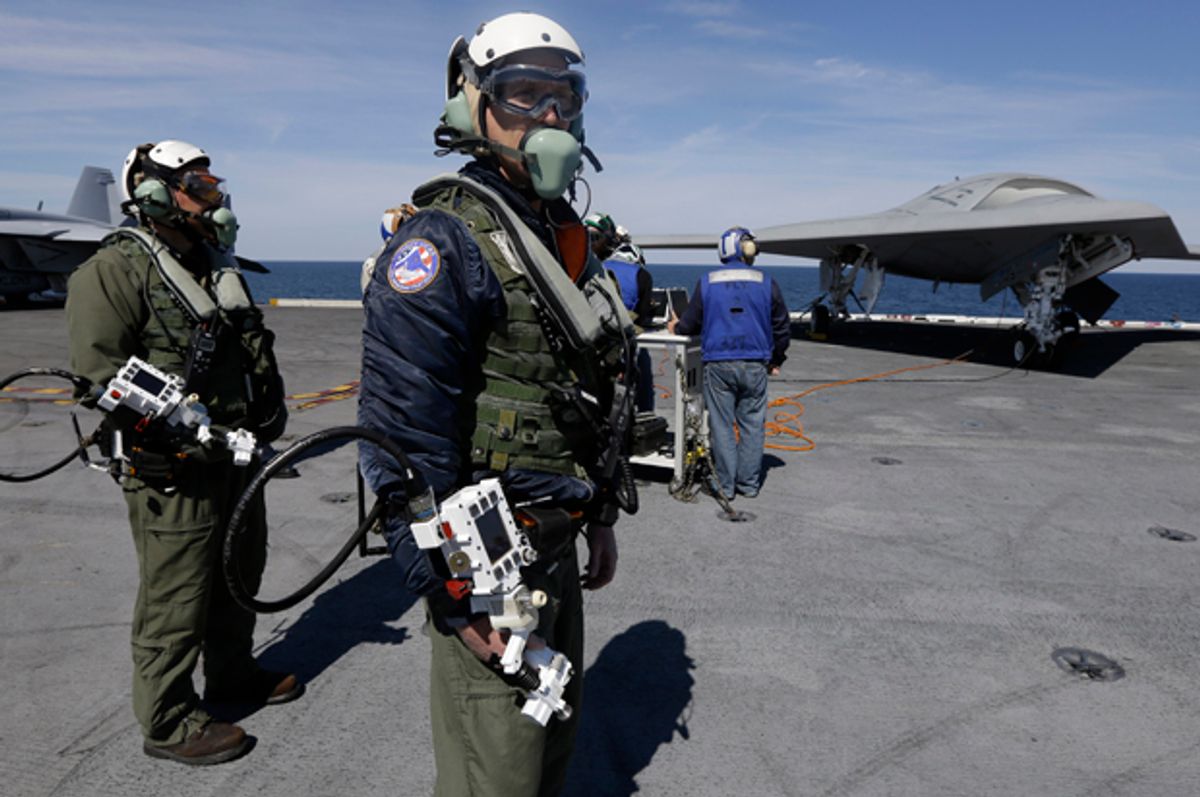 A massive, $7.2 billion Army intelligence contract signed just 10 days ago underscores the central role to be played by the National Security Agency and its army of private contractors in the unfolding air war being carried out by the United States and its Gulf States allies against the Islamic State in Iraq and Syria.

That war was greatly expanded Monday night when U.S. forces launched a “mix of fighter, bomber, remotely-piloted aircraft and Tomahawk” cruise missiles against ISIS targets in Syria. The Central Command said the strikes were led by the United States with support from Bahrain, Jordan, Saudi Arabia, Qatar and the United Arab Emirates.

INSCOM’s “global intelligence support” contract will place the contractors at the center of this fight. It was unveiled on Sept. 12 by the U.S. Army’s Intelligence and Security Command (INSCOM), one of the largest military units that collects signals intelligence for the NSA.

Under its terms, 21 companies, led by Booz Allen Hamilton, BAE Systems, Lockheed Martin and Northrop Grumman, will compete over the next five years to provide “fully integrated intelligence, security and information operations” in Afghanistan and “future contingency operations” around the world.

The NSA is best-known to Americans for its awesome power to spy on the electronic communications of governments and populations around the world. But it is also a critical part of the Pentagon chain of command, particularly during wartime, and collects most of its intercepted communications from a global web of listening posts and military intelligence units operated by INSCOM and the other armed services.

INSCOM, which was created in 1978, has been at the cusp of U.S. policy in the wars on terror from the initial campaign against the Taliban in the fall of 2001 to the latest war against ISIS.  Much of the top-secret work under the new INSCOM contract will take place at NSA’s networks of listening posts, and will “support complex, classified, compartmented, and/or unique ground-based and airborne reconnaissance and electronic intelligence collection and production systems,” the Pentagon said.

“Army INSCOM supports NSA very heavily,” Tony Shaffer, a former Army intelligence officer, who worked at the command from 1991 to 1995, told Salon. While he was stationed in Afghanistan after the 9/11 attacks, Shaffer said, “Every mission I ran outside the wire was pretty much supported by INSCOM, which is NSA’s ground collector.” Shaffer wrote about his experiences in the book "Operation Dark Heart."

According to contract documents available on INSCOM’s website, INSCOM’s contractors will be based at the NSA’s massive surveillance station at Fort Gordon, Georgia, where thousands of analysts monitor and listen in on cellphone calls and emails flowing out of the Middle East, as well as listening stations in Fort Bragg, San Antonio, Hawaii, Colorado, Germany and South Korea.

INSCOM announced the global intelligence contract two days after President Obama, in a speech to the nation, essentially declared war on ISIS in Iraq and Syria and outlined a campaign of airstrikes and combat actions to “degrade and ultimately destroy” the terrorist group.

Key to the war will be battlefield intelligence, surveillance and reconnaissance, known by its military acronym ISR, that is fed to U.S. pilots, drones, special forces operators and military advisers to track and kill ISIS fighters and their allies. Signals intelligence, a key component of ISR, is analyzed by the NSA and combined with imagery and maps provided by the National Geospatial-Intelligence Agency (NGA). Together, NSA signals and NGA imagery provide the “ears and eyes” that allow pilots and soldiers to find their targets and blow them up.

The INSCOM contract will provide the facilities and logistics support “for ground and air-based ISR systems” and provide operational support to both NSA and the NGA, the command said.

The top contractors on the INSCOM contract are already involved in the war. Lockheed Martin, for example, makes the Hellfire missiles that are used extensively in U.S. drone strikes (in 2013, it also won a three-year contract to train INSCOM’S “Army intelligence soldiers” in “analytical and operational disciplines”). Northrop Grumman makes the Global Hawk surveillance drone, one of the most formidable weapons in the U.S. arsenal. Both companies have large intelligence units.

The role of contractors at the command is spelled out by BAE Systems, which has its own INSCOM website. “We enhance the U.S. Army’s ability to detect, decide, and act on vital intelligence in real-time,” BAE says. “From Intelligence Analysis to Persistent Surveillance, BAE Systems is proud to provide essential and sustainable end-to-end solutions and support to the warfighter.”

Because of its direct role in warfare, INSCOM has become the training ground for many top NSA officials and was central to the career of Army Gen. Keith Alexander, who retired this year as the longest-serving NSA director in U.S. history.

Alexander, who recently started his own contracting company called IronNet Cybersecurity, came to NSA directly from INSCOM, which he commanded at the time of the 9/11 attacks on New York and Washington. It was from INSCOM that he and then NSA director Michael J. Hayden ordered the warrantless surveillance of U.S. persons and their email and Internet communications that now stands as one of the most controversial practices of America’s post-9/11 intelligence system.

INSCOM “is where Alexander grew up,” Tom Drake, who worked as a senior executive at NSA for seven years before becoming a whistle-blower, told Salon. “That’s where he got his contractor ties.” In fact, INSCOM happens to be one of the most contracted units of the NSA’s SIGINT empire, and has long been a business driver of the intelligence industrial complex.

As I first reported in Salon in 2007 and later chronicled in my book "Spies for Hire," 70 percent of the U.S. intelligence budget is spent on private contractors. Much of this spending – estimated at around $70 billion a year – winds up at the NSA, where SIGINT operations, particularly for collection and analysis, were heavily outsourced at the turn of the century.

“Hayden started the privatization, but it was really Alexander who built it,” said Drake.

Alexander’s ties with INSCOM are extensive. One of the winning bidders on the new INSCOM contract is Sotera Defense Solutions. Russell Richardson, its former CEO and a former INSCOM commander, is now one of Alexander’s partners at IronNet and, under Alexander’s command of INSCOM, was its “chief architect.” Before that, Richardson was a vice president of NSA contractor SAIC, where he ran INSCOM’s so-called Information Dominance Center.

INSCOM’s ties with Booz Allen, the company that employed Edward Snowden at its top secret site in Hawaii, are equally close. Robert Noonan, who directs the company’s “military intelligence account,” served for 35 years in the military, including a stint as INSCOM’s commanding general and the US Army’s deputy chief of staff for intelligence. Roberto Andujar, the INSCOM contract leader at Invertix Corp., another contract winner, once served as the command’s chief information officer (CIO).

The revolving door between INSCOM and its contractors bothers Shaffer. “It’s a cash-and-carry program,” he said. “You go in there and get the knowledge, then you carry it out and get cash.”

The system is corrupted by the close relationships between the companies and their agencies, said Drake, who as a whistle-blower was nearly sent to prison for exposing the waste, fraud and abuse in a contracted program at the NSA that ended up losing over $7 billion – ironically the same amount as the INSCOM contract.

The contractors on the INSCOM global contract will be involved at the highest levels of U.S. intelligence. According to the INSCOM documents, all contractors will be required to have security clearances to allow them to access highly classified special compartmented information and top secret intelligence networks. One of those networks, the documents say, is NSA’s special network for SIGINT collection called NSANet.

Apparently in response to Snowden’s leaks of documents he found on NSANet, the INSCOM contract documents include warnings that contractors must notify Army security officials of “any change in status of SCI-accessed personnel: marriage, divorce, name change, etc.,” and inform them “within 24 hours of when they become aware of derogatory information (arrests, security incidents, etc.).”

The Pentagon press office referred all calls on the contract to INSCOM. The command did not comment by press time.

Secretary of Defense Chuck Hagel has warned against any proposed changes to NSA procedures that could compromise its role in warfare. “Our combatant commanders, our military, our individual men and women who are charged with the security of this country – they are as big of users and customers [of NSA-produced data] as anyone,” he said last December in response to proposals from a White House committee reviewing NSA policy.