Where is the actual black ish on "Black-ish"?

ABC's new show has been touted as the Great Black Hope of network comedy. Much to my disappointment, it's not 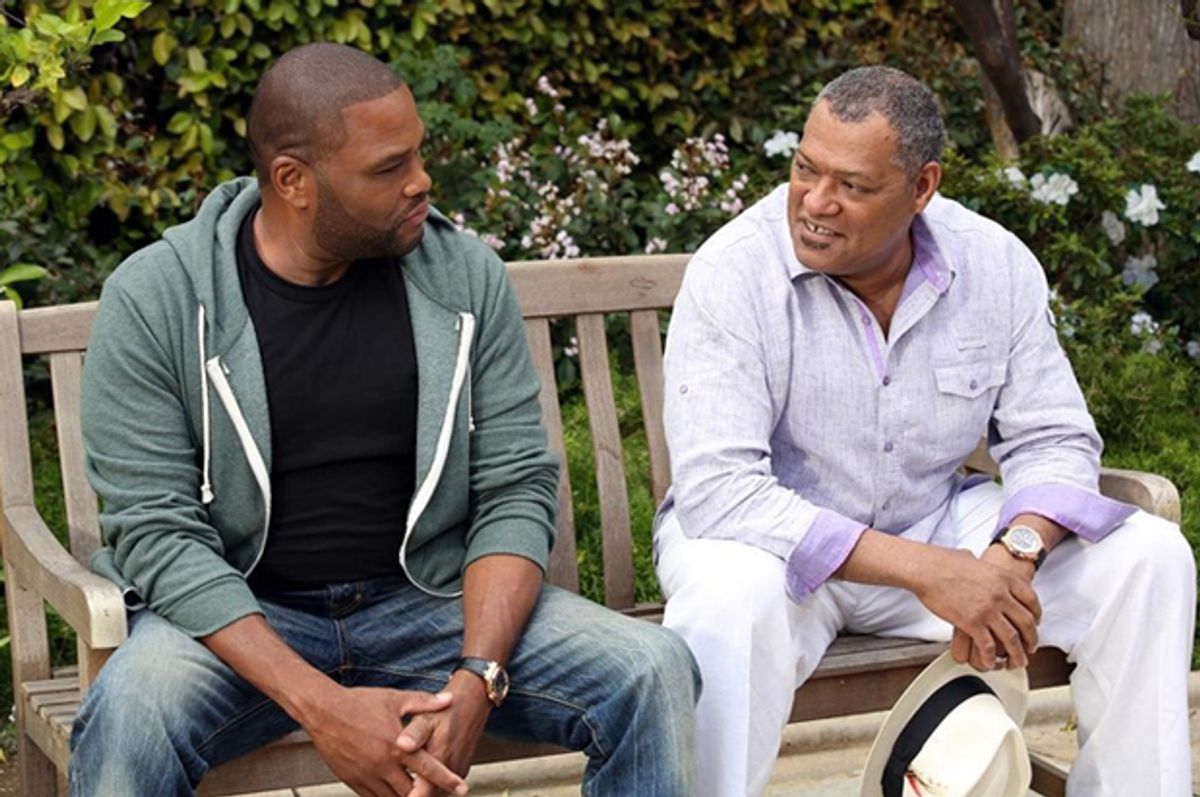 Considering how few sitcoms about black families are currently on the air, "Black-ish" has been viewed by some as the Great Black Hope of this fall's network comedy lineup. And from the opening moments of the pilot, things look promising: We begin with a just-rising-from-sleep Andre Johnson, played by Anthony Anderson, managing his excitement at a promotion he expects to receive later that day. As Kanye West's "Jesus Walks" plays in the background, we're introduced to Andre's snoring wife,, Rainbow (Tracee Ellis Ross), who's a doctor. We meet his four kids and his curmudgeonly dad Pops, played by Laurence Fishburne (who seems too young to play Anderson's father). In a great joke about being black and middle-class in a white neighborhood, Andre imagines a Hollywood tour bus marveling at his brown-skinned family while he picks up the morning paper. Unfortunately, the "Black-ish" pilot comes across as a Hollywood tour of black American identity tropes.

Pilots usually try a little too hard, but this one tries too hard in about 50 ways at once. The episode takes place over just a few days, but it feels like several years' worth of sitcom plots crammed into 22 minutes. Andre is in line for a promotion to senior vice president of his firm's Urban Division (code speak for Black Division), which he discovers at the last minute. Insulted by what he feels is a diminished role, the bougie Andre attempts self-sabotage by bungling a presentation that would secure the position. Meanwhile Andre Jr., his oldest son, is naturally in the midst of the most existential period of his young life. On his way to school, Jr. tells dad that he's going by Andy now, because it's "edgy but approachable." He also comes out to his dad as a field hockey player, shattering the old man's dreams of watching the Johnson family jump-shot in action. "Look at that form, look at the elbow!" Andre yelps, producing the basketball pose.

When Jr. opts to celebrate his birthday with a bar mitzvah, his father throws the boy a generic African rites-of-passage party instead. There’s the requisite moment when, after a particularly fraught parenting moment, Andre decides to take it easy on his son, and on himself. After that exhaustive segment, you can almost imagine Bill Cosby or Larry Wilmore (who's executive producing) saying, "Look at that form!" Basically, Andre Johnson is an amalgamation of the Great Black TV Dad. He combines the earnest affection of Cliff Huxtable, the comic frustration of Bernie Mac, the playful schooling of Michael Kyle, and the hardworking steeze of James Evans. With Anderson's ad exec married to the doctor played by Ellis Ross, we've got good times, although without the sensibilities that made a show like "Good Times" so great.

"Good Times," despite all of its later-emphasis on J.J. and his "Dyno-mite" catchphrase, depicted a black family unconcerned with questioning blackness. “Good Times” felt like it was made primarily for black families to enjoy, even though it appealed to almost everyone. In one of “Black-ish's" slow-motion montages, Andre comes into work and struts down the hallway with "Mr. Big Stuff" playing in the background. His black co-workers, from the receptionist to the janitor, nod and wish him good luck. Later, in a board meeting before he's offered the promotion, Andre is delighted to sit on the side of the table with the all-white executive team, leaving his mostly black co-workers behind. For James Evans and all of the other Black TV Dads after him, the joy of getting to the other side of the table would've been complicated by the isolation of being the only one there.

Andre only bristles at his place when the reality of leading the Urban Division offends his middle-class sensibilities. Much of this episode is devoted to, as Dave Chappelle put it, "when keeping it real goes wrong." “Good Times” and “The Cosby Show” didn't have to "keep it real," because the Evans family had nothing to prove to anyone but themselves. Cliff and Claire Huxtable were black professionals secure in both their journeys and their place in the community. One of the show's first scenes depicts Andre losing a parking space to a white woman, who gives him the finger. Then Andre half-jokes about missing "the advantages of being the scary black guy," which given recent events, is tone-deaf. It's no coincidence we don't hear from the working-class people in the hallway montage; they’d have an entirely different perspective than Andre and Rainbow.

"Black-ish" pretends we live in a post-race society. Why else would a black family have to constantly remind itself of its own race and culture? At one point Andre jokes that his wife, who's biracial, might want to reconsider her blackness (this doesn’t feel like something a loving husband would chide his wife about). “If I’m not really black, then can someone please tell my hair and my ass?” Rainbow responds. As if that’s all it’s about. Like "The Wire's" The Greek, Laurence Fishburne sits off in the corner of most scenes reading a newspaper, keeping a safe distance from the proceedings. And like The Greek, he seems to be the only character with real perspective within his scenes.

If "Black-ish" has any incisive jokes about race and identity, I'm quite sure they'll belong to Fishburne. Pops’ bit about the March on Washington, for instance, is pretty funny. When he claims he didn’t participate in the march to watch what he feels is his son and grandson’s mushy display of affection, Andre reminds him that at the time of the march, he was “in D.C. for an Isley Brothers concert!” When Tracee Ellis Ross' character asks, exasperated, if the family can "take a black break," it feels a lot like she's articulating one of the show's main themes, and indeed, the major thrust of Anderson's consternation at being promoted to head the Urban Division. He'd wanted to be the firm's first black senior V.P. “who just happens to be black,” i.e., the firm’s first black S.V.P. of a non-black division. Just like that stance, the show's title represents some conditionality about racial identity, meaning that the only value of blackness is tangential. Fittingly, the title is deliberately imprecise, like a racial approximation of what color your charcoal boots are, or what color nail polish you should try next.

You know the show aims to present some real black ish, and sadly only conveys the "not-quite" tone the word "ish" suggests. The props from Andre Jr.'s African rites-of-passage ceremony appear to have been grabbed straight from Design Within Reach. Because “Black-ish's" cursory music montages (they get credit for being one of the only TV shows in history to feature Dead Prez's "Hip Hop") are shot so cleanly, they often feel like Target commercials. It starts to make sense that Andre Johnson is an advertising exec. For a show about a black family that's so self-conscious and awkward about race, it's clear that "Black-ish's" creator and head writer, Kenya Barris, is just as concerned with branding as she is with identity. But when you can almost hear this shadow conversation about branding in every scene, it doesn't exactly make you bond with the characters on your screen, so much as make you feel alienated by watching such carefully calibrated black 'bots in motion.

In separate scenes, Anderson's character presents to his bosses two very different pitches for an "urban LA" tourism campaign. In the first, which is wildly unrealistic, Johnson screws up the presentation on purpose, showing a video of the L.A. riots. It feels so off because we spend the first half of the episode hearing about how S.V.P. is a dream role that nobody in his or her right mind would risk, and Andre certainly seems to be smart. ("Black-ish" will undoubtedly feature an episode about the conundrum of complimenting smart black people on their intellect.) In the second, he cuts together a polished clip of a Pantone-colorful, hipster "urban" L.A. After watching Wednesday's pilot, you don't wonder why the two presentations were complete opposites of each other, or why Johnson didn't choose to present a more nuanced view of "urban L.A.," because you know why: “Black-ish” substitutes nuance for a surface-level engagement with authenticity politics. Instead, you wonder where the actual black shit is.