President Obama saluted a Marine while holding a coffee cup. This is worth at least 70 impeachments 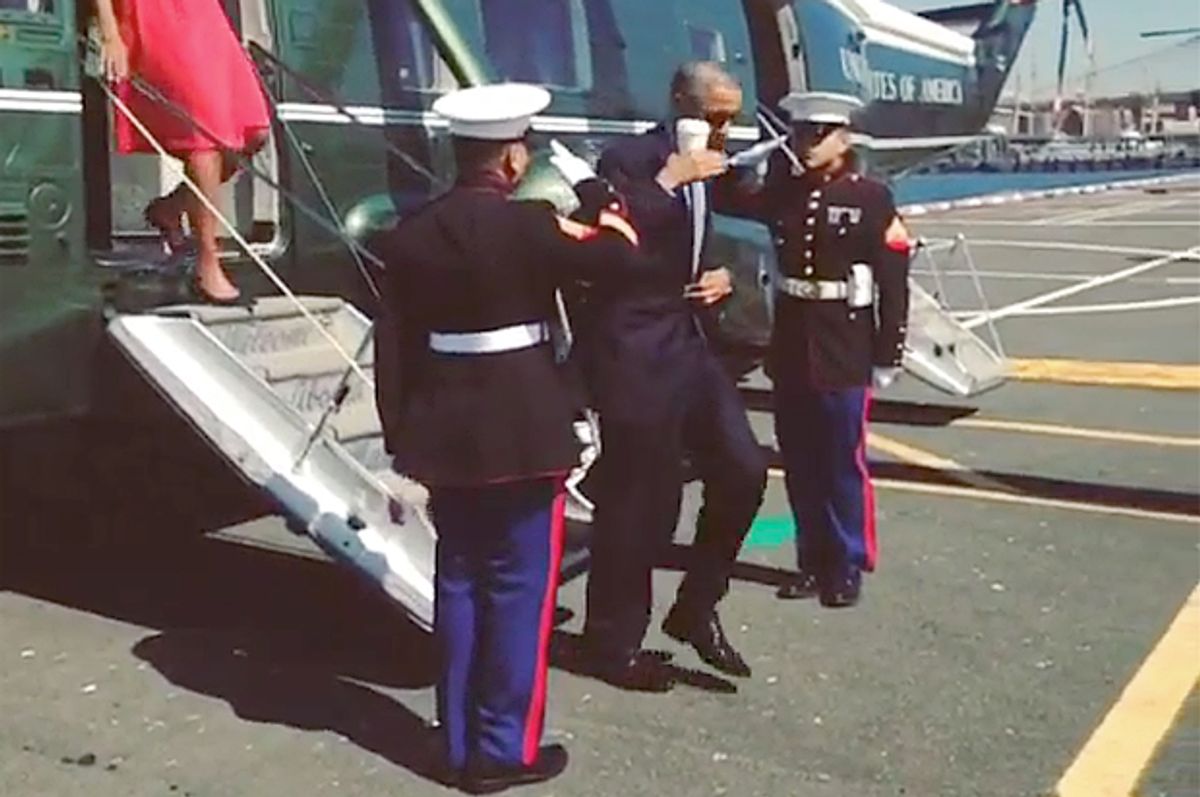 Despite what some of our friends on the right might think, liberal commentators do not love the emergence of every meme that indicates conservatives have lost their minds. It would be much better, for liberals and conservatives, if certain acts of trivia regarding President Obama weren't blown up into viral scandals and we could go on discussing other, more important things, like the new war or the Major League Baseball playoffs. But here we are. And while I'm punching myself in the face right now for even bringing it up, it must(?) be Brought Up: Let's talk about President Obama holding a cup of coffee while saluting a Marine.

On Tuesday the official White House Instagram account, for whatever reason, uploaded a video of President Obama descending the steps from Marine One after arriving in New York City. He is holding a cup of coffee in his right hand. As is customary, Marines are waiting for him at the bottom of the steps, and, as is also customary, the commander in chief offers a salute. President Obama salutes a Marine while holding the cup of coffee in his hand.

...Wait, what? You want to hear the end of the story? You just heard it, you silly goose! That's the whole story, if you're going to be generous and call it a story.

At first, this was just one of those modest breaks from normalcy that bored people on Twitter point out and make dumb puns about, because they hate their lives, like that time the president wore a light-colored suit or when he went out to lunch at Chipotle. Then D-list conservatives on Twitter determined that this was a grievous offense. "If there was ever any doubt as 2 the level of regard Obama holds for our military, this latte salute seals the deal," former Rep. Allen West wrote. The National Republican Congressional Committee breathlessly chimed in that this "might be the most absurd video of President Obama we’ve ever seen," below which it requested donations. Somehow it became common knowledge that the hot beverage the president was holding was a latte -- the drink of choice for metrosexual urbane Democrats, according to an oft-used joke from the 1990s. The hashtag #LatteSalute was born.

By Tuesday evening, we had the spectacle of Karl Rove, a political adviser to the previous president who launched a ground war in the Middle East without a strategy, asking incredulously, "I mean, please, how disrespectful was that?" Rove went on, hilariously, to describe Obama as a "chai-swillin’, golf-playin’, basketball trash-talkin’" president. (Chai tea is another drink that President Obama probably drinks, because he is pathetic. And it's true that he enjoys playing both golf and basketball.)

This was not the end of it. By Wednesday, the National Republican Senatorial Committee had begun issuing free bumper stickers reading "PUT THAT COFFEE DOWN! #semperlatte" to anyone dim enough to give their name and information to the National Republican Senatorial Committee. We'd like to say that it would be amazing if people affixed permanently to their cars a reference to a meme that no one will even remember in another 24 hours. But at this rate, it probably won't be forgotten for at least another week!

#LatteSalute or #ChaiSalute or #SemperLatte is now officially a whole big thing, based on the president holding a cup. The implication being that he doesn't understand and/or hates the United States military.

Why is this a whole big thing? Would it have been a whole big thing a few weeks ago? It may have been noted, but we doubt it would have picked up as much traction as it's getting now. And that's because a few weeks ago, President Obama was still being assaulted on the right for his weakness or hesitancy in deploying force to address problems in the Middle East. Whatever long-term problems the president's decision to bomb Syria and Iraq indefinitely will sow, those attacks from the right about the president's "weakness" have been neutralized in the short-term. That's hardly saying that "neutralizing attacks from the right" are solid justification for going to war -- it's better to just ignore them -- but for now, hawks haven't got much to work with. Except the coffee cup. The effete gay military-hating coffee cup! Sure, that'll have to do.