Neocons' Ferguson freakout: Why their latest attack on Obama makes them look so silly

The president's noting the turmoil in Ferguson during a speech at the U.N. has got Cheney and friends livid 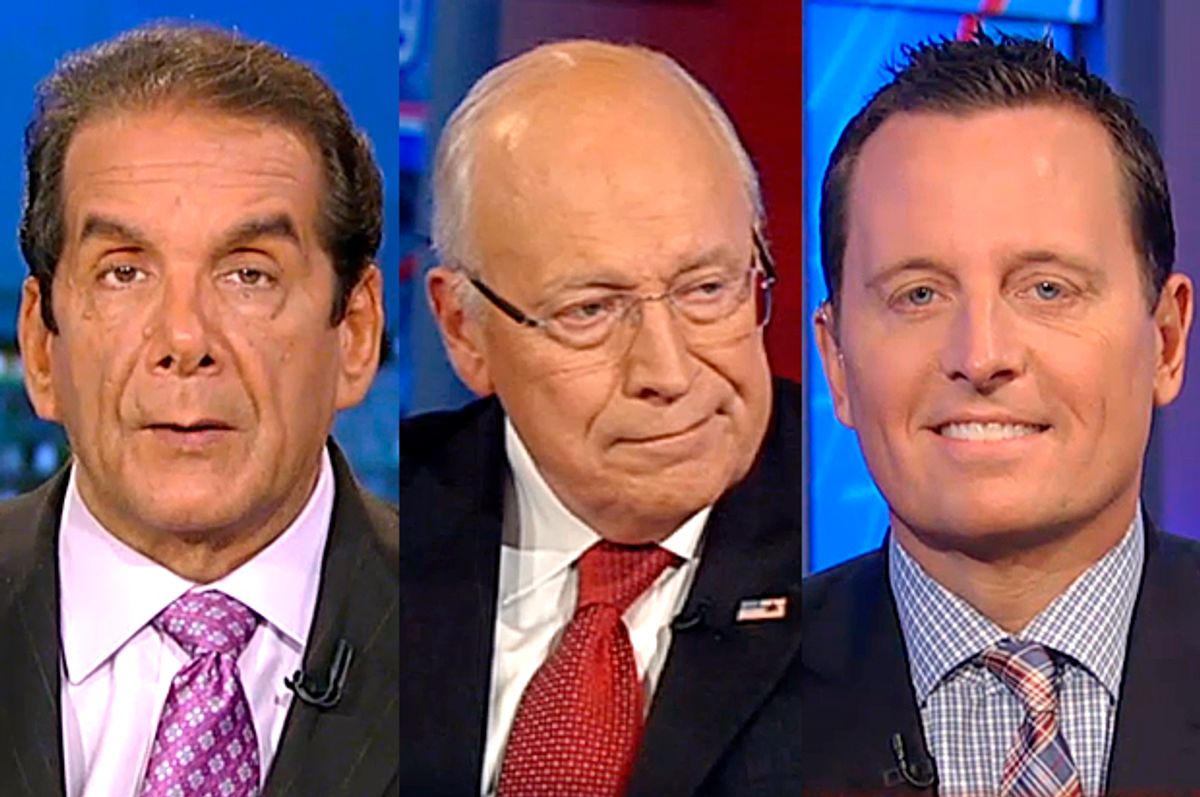 Near the very end of his Wednesday speech to the U.N. General Assembly — a speech that pundits described as “Wilsonian” and "the most liberal foreign policy address" of his career — President Obama acknowledged that despite its claim of global leadership, the United States sometimes falls short of living up to its self-professed values. "I realize that America’s critics will be quick to point out that at times we too have failed to live up to our ideals," Obama said. "In a summer marked by instability in the Middle East and Eastern Europe, I know the world also took notice of the small American city of Ferguson, Missouri," Obama continued, "where a young man was killed, and a community was divided."

This was the geopolitical equivalent of a boss trying to prove to her employees she's relatable by noting that even she sometimes makes mistakes. And if they noticed this moment at all, most people likely saw it for what it was: a harmless act of genuflection, delivered by a U.S. president in service of his ultimate goal, rallying global opinion behind another American war in the Middle East. In other words, nothing to see here, folks; keep it movin'.

But as we now know all too well, neoconservatives are not like most people; their response to Obama's Ferguson remark was nothing short of apoplectic.

"I was stunned," neocon hero and former Vice President Dick Cheney said of the Ferguson reference during an appearance on Sean Hannity's Fox News show later that night. The president's rhetorical pairing of the turmoil in Ukraine and the Levant with that in Ferguson, Cheney said, was simply unacceptable. "In one case, you’ve got a police officer involved in a shooting, there may be questions about it to be sorted out by the legal process, but there’s no comparison to that with what ISIS is doing to thousands of people throughout the Middle East," Cheney said, before huffing: "To compare the two as though there’s moral equivalence there, I think, is outrageous."

Washington Post columnist and fellow neoconservative Charles Krauthammer hit a similar note in his response (also delivered on Fox News, naturally) by dusting off a circa 2009 anti-Obama talking point and describing the speech as "a continuation of the apology tour." Echoing Cheney, Krauthammer declared Obama "intended [to draw] a moral equivalence" between ISIS and America. He then snarked about the silver lining of having Obama "talking about our sins" at the U.N. in New York City, rather than doing so while on foreign soil. (Like, say, Montreal, where Krauthammer spent his childhood.)

Last — and considering this is the man who helped organize the smear campaign against Bowe Bergdahl — very much least, there was Richard Grenell, former top aide to every neoconservative's fantasy presidential candidate, ex-U.N. Ambassador John Bolton.  Writing at, yes, Fox News' website, Grenell argued the president's mentioning Ferguson was "a big mistake." Grenell conceded that "humility and self-reflection are admirable leadership qualities" but nevertheless warned how Obama's speech "gives foreign diplomats from Arab countries and Russia the excuse they need to dismiss America’s condemnation of their actions." Because they were otherwise so primed for genuine cooperation...

To state the obvious, it is not surprising to find neoconservatives blasting the president, even if he's currently launching a war against ISIS that, in significant respects, justifies itself intellectually through neoconservative-friendly arguments. Dedicated neoconservatives tend to be rigid partisans when it comes to politics, uninterested in compromise and focused primarily on controlling U.S. military power.  What's striking about the neocon attack isn't its churlishness, therefore, but rather its transparency. Think of the characteristic emotional tics of neoconservatism — its paranoia, its insecurity, its obsessive fear of looking weak — and look back again at the words of the president's neocon critics. They're all there.

An example: For Cheney, Krauthammer and Grenell, the obvious but unstated assumption is that an American president addressing the United Nations must do so as if he has something to hide. Obama's attempt to emphasize the U.S.'s role as both leader and member of the international order — to approach the world as an eager partner instead of  an overbearing hegemon — is offensive to them because it treats the idea of a global community as an aspiration instead of a nuisance. Most neoconservatives, as Grenell's old boss Bolton infamously made plain, aren't much interested in the idea of a U.N. Since the U.S. can militarily do almost whatever it wants, they don't see the purpose.

Along the same lines, the response from all three men included expressions of outrage at the president's supposedly drawing a moral equivalence between ISIS and Ferguson's police. The fear of the pernicious results of moral equivalency can be found throughout the right, but in the realm of foreign policy, it's most pronounced among neoconservatives, for whom any recognition of the most basic shared humanity between the U.S. and its foes — and I'm talking basic, here; like the capacity to make mistakes — is tantamount to swearing off any claim to moral legitimacy. The fact that the United States is a more humane, responsible and decent global citizen than the genocidal ISIS is obvious enough to most of us (and not saying much, either). But, again, the neocons are the exception.

Finally, the neocon pushback also highlights what is to my mind one of their most distinctive and revealing features — their utter lack of interest in domestic policy. Neo-imperialists that they are, neocons often see domestic politics solely through the lens of foreign affairs. And because they're so zeroed-in on what they imagine the world's perception of the U.S. is (as well as what it should be), they'll not infrequently analyze domestic events with a kind of myopia that prioritizes the U.S. #brand above all else. Richard Grenell doesn't know enough about the goings on in Ferguson to understand that Michael Brown's killing had nothing to do with his alleged robbery, which officer Darren Wilson did not know of when he came into conflict with the teen. He refers to it as a "burglary-turned-shooting." (I suppose we could chalk Grenell's mistake up to laziness and/or a desire to mislead, but I'm feeling generous.)

At this point, nearly 13 years after they set up shop in the White House and spent years directing and discrediting U.S. foreign policy, I'd forgive you for wanting a break from having to transport yourself into the gloomy world of the neocons' minds. But as the ongoing war with ISIS and the aforementioned freakout over Bowe Bergdahl have recently made clear, neoconservatism still has an outsized influence in Washington, if nowhere else. That's partially because any theory justifying neo-imperialism is bound to have nine lives among the D.C. elite. But it's also in part the consequence of too many analysts and observers coming across statements like those of Cheney, Krauthammer and Grenell and declining to cut through the bullshit and acknowledge the truth — namely, that these men are very, very silly.