Every parent should read this comic book

From finding a babysitter to handling in-laws to flying through space in a tree, "Saga" makes parenting relatable 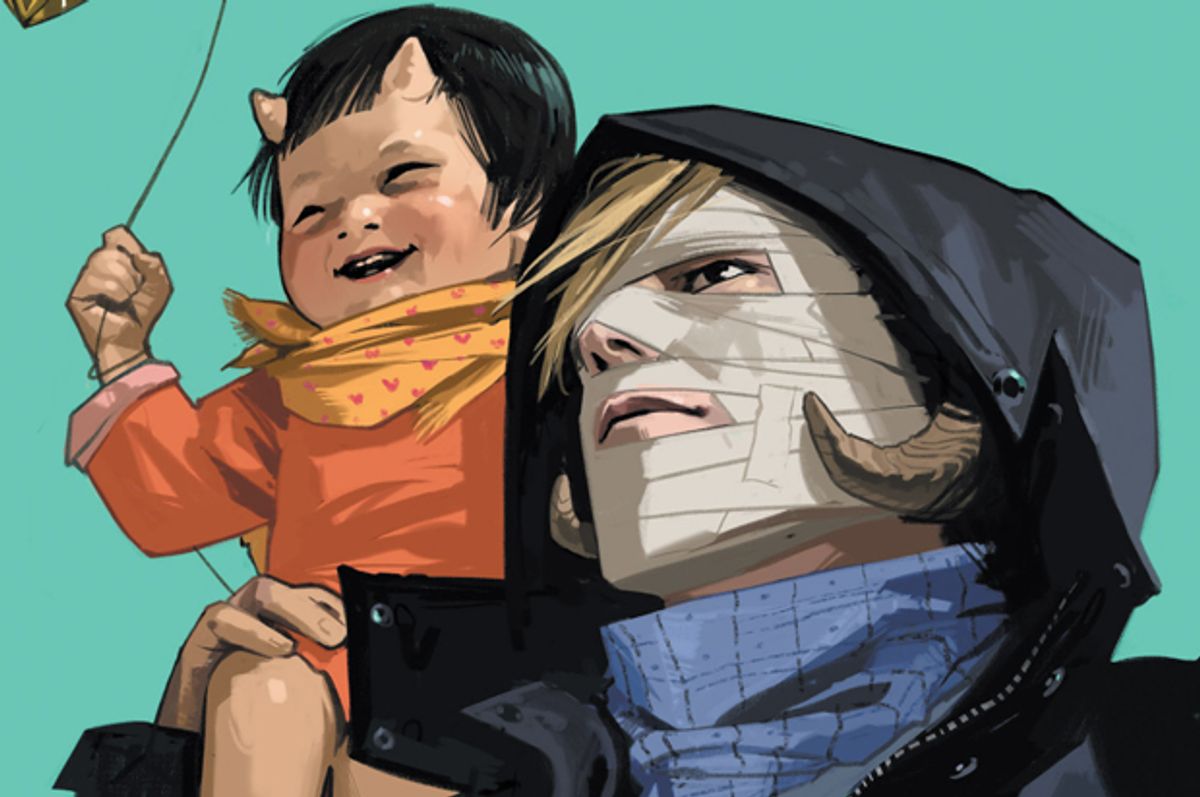 A detail from the cover of "Saga Chapter Twenty" (Image Comics)
--

If you thought comic books were for kids, you were wrong. And if you have or are currently raising offspring, you need to read "Saga." This is an ongoing Image comic by Brian K. Vaughan and Fiona Staples that puts a sci-fi spin on adventures in parenthood and marriage. Underneath all the space monsters, warring factions and ghost nannies is the simplest drama of all: How the hell are you supposed to raise a kid in a galaxy like this?

The premise of “Saga” is simple. Lead characters Alana and Marko belong to feuding alien races, but they fell in love; they’re the Romeo and Juliet of sci-fi comics. Both races—along with much of the galaxy, including bounty hunters—are outraged and after our heroes. The couple have a child, Hazel, who outrages the powers-that-be even more. When you’re committed to war and racism, such an adorable, biracial symbol of peace is unacceptable. The series follows Alana and Marko as they run for their lives while trying to somehow make a normal life for Hazel.

Throughout the series, Alana and Marko deal with heightened versions of real-life problems, such as agreeing on a name for their girl, dealing with in-laws, finding a babysitter, making a living and flying through space in a sentient tree. OK, maybe it’s not all relatable, but it is all fun and/or moving. Writer Vaughan has said he wrote “Saga” out of a desire to explore the terrors and joys of parenthood in a way that would be interesting to non-parents as well as parents. He’s succeeded, much like Joss Whedon used horror to explore the real-life horror of high school in “Buffy the Vampire Slayer.”

Family dynamics play out in several other plots and characters. Bounty hunter The Will (all bounty hunters have names like The Stalk) creates a makeshift family of his own with Marko’s disgruntled ex-girlfriend and a slave girl he saves from a space brothel. The Robot royal family is torn apart by a drunken, sleazeball dad. Author D. Oswald Heist lost his son in the war that constantly threatens our heroes. Aside from parallelism, these plots serve another function: they remind readers of the dangerous world Hazel will inherit, stirring parental anxiety in readers. Every aspect of the series reinforces the perils of parenting.

But if this sounds like nothing but Parenthood in Space, there are plenty of other reasons to read “Saga.” There’s political intrigue involving the bizarre Robot family, who have TVs for heads. Tabloid journalists Upsher and Doff are mainly comic relief, but it’s interesting to see the press’s perspective on the Alana-Marko romance, which is being covered up. There’s workplace drama and humor at the Circuit, a futuristic version of pro wrestling where Alana lands a job. As in “Star Wars”—a major influence on this series—the bounty hunters are cool as hell, unlike real-life bounty hunters. The most important thus far is The Will, whose partner is the show-stealer of the series: Lying Cat. This large feline beast only says one word, but it’s a doozy: “Lying.” She’s a furry, four-legged lie detector and impossible to dislike. Vaughan and Staples have created a colorful world that riffs on reality and fantasy while always feeling coherent and real for the characters.

Fiona Staples’ painted art is simply a wonder. Comics are a tricky art form, since the characters are only glimpsed in snapshots that suggest action. Staples has a particular gift for facial expressions; her faces nail the perfect emotional beat every time. Her technical skill is impressive, capturing just the expression that fits the dialogue while moving the characters and plot forward. She also deserves extra praise for the beautiful covers and first pages, which tend to begin in the middle of a striking/gross/bonkers situation. When you open to page one of “Saga,” there’s no other comic it could possibly be.

I started reading “Saga” through the collections, but once I caught up, I had to resort to the weekly issues. Turns out the series is even more enjoyable this way. It’s a rare single-issue comic that can satisfy you the way a great episode of TV can, but Vaughan and Staples pull it off every month. Each issue feels like a full meal: stuff happens, with emotional impact, and the story keeps pushing forward with gorgeous art. Plus, now I get to enjoy “Saga” every month instead of burning through a collection in one sitting a few times a year.

Part of what makes “Saga” such a great monthly read is the narration—the entire series is told from the point of view of Hazel at some future point in her life. We don’t know if she’s a teenager, an adult, an old woman or what, but it is comforting to know that she survived the immediate danger. The narration, which is never intrusive or overdone, often ups the emotional ante, like when Hazel dropped the horrifying news that the fourth arc of the series would be—spoiler alert—“...the story of how my parents split up.” Through Hazel, Vaughan puts readers through the emotional wringer.

I’m not the only one feeling the pull of “Saga,” which has become quite a hit; it’s Image’s second-best-selling monthly comic next to “The Walking Dead,” and it outsells plenty of mainstream fare from Marvel and DC. At a local comics chain in Chicago (Graham Crackers Comics), “Saga” collections account for the top three best-selling graphic novels, and those collections have been mainstays on the New York Times bestseller list. This is especially impressive for a series that has no TV or movie version, no Batman or Spider-Man and doesn’t feature 50 superheroes teaming up for The Original Secret Crisis that Will Change Everything Forever Until Next Month’s Boondoggle. “Saga” is the rare critical darling that gets great reviews, wins boatloads of Eisners and Harveys, and also makes money.

I assume “Saga” will eventually be a TV show or movie, but I don’t care and neither should you. “Saga” is perfect as is: a glorious reminder of how spectacular comics can be. If I could only buy one comic a month, this would be it—and I don't even have kids.