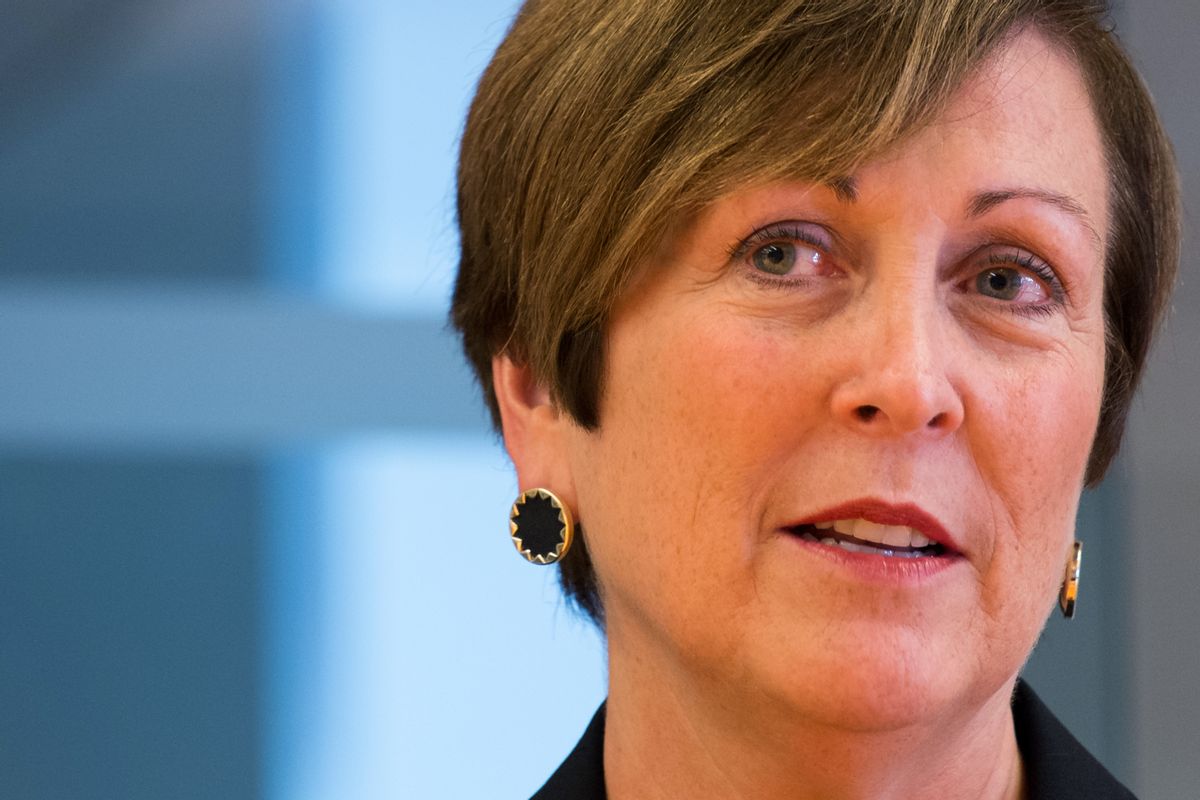 John F. Kennedy Center for the Performing Arts President Deborah F. Rutter answers questions about her vision for the center during a interview at the Associated Press in Washington, Friday Sept. 26, 2014. (AP Photo/J. David Ake) (AP)
--

WASHINGTON (AP) — Deborah Rutter says there's no reason the nation's capital should be thought of as a conservative, risk-averse place for the arts. Instead, she wants to see the Kennedy Center drive more innovation and discussion about the role of the arts in society.

In her first month as the new president of the busy performing arts center, Rutter said she has been thinking of ways to break down barriers between artists and audiences to foster more interaction. She also wants to make the center more accessible to more people, reviewing everything from pricing to the experience of visitors walking through the door.

Since 1971, the Kennedy Center has been a national cultural center and memorial to President John F. Kennedy. Rutter took charge Sept. 1 and is the first woman to lead the center. She had headed the Chicago Symphony Orchestra and was lauded for fostering greater community engagement and a vibrant artistic organization. She also has led orchestra companies in Los Angeles and Seattle.

Now Rutter leads a more comprehensive arts center that includes the National Symphony Orchestra, Washington National Opera and programs in theater, jazz, dance and arts education. She discussed her new role Friday with editors and reporters at The Associated Press.

"I want the Kennedy Center to be a place of joy, a place of discovery, a place of innovation and a place that sort of looks to what is the role of the performing arts in our society," she said. "I want to bring the artist back into the center of every conversation."

In the years ahead, the 57-year-old Rutter, who was raised in California, said she will work hard to end the notion that Washington is a more conservative arts town than Chicago, Los Angeles, New York City or elsewhere.

"We should actually be pushing harder because we're in the nation's capital," she said. "We shouldn't be more conservative. We should be saying 'Let's celebrate all that exists, all of the performing arts.'"

But trying new things and being more daring with classical or contemporary works means first building trust with the audience, she said.

As a large, nonprofit arts center with a history of sending shows to the commercial theaters of Broadway, Rutter said the Kennedy Center should continue to be a place that identifies and fosters new art, such as its successful revival of the Broadway-bound musical "Side Show" and the center's new musical "Little Dancer" opening in October. It is inspired by the story of a famous Degas sculpture at the National Gallery of Art.

"We're going to have to take calculated risks, but I believe we should be encouraging and nurturing those," she said.

Rutter has plans to push the boundaries of the relationship between artists and audience, pulling back the curtain to show how art is created. Even before her arrival, she had been meeting with designers of the center's first major expansion.

It's set to open in 2017 with new rehearsal halls, program spaces and exhibits, and each rehearsal space will have windows for the public to see actors and musicians at work and for the artists to see the public. Or visitors could sit alongside musicians as they practice or perform.

"As you think about audiences today, they want to be more connected to what's being created and not have it be a one-directional experience," Rutter said. "Great art is when the audience has a huge impact on what is happening on the stage."