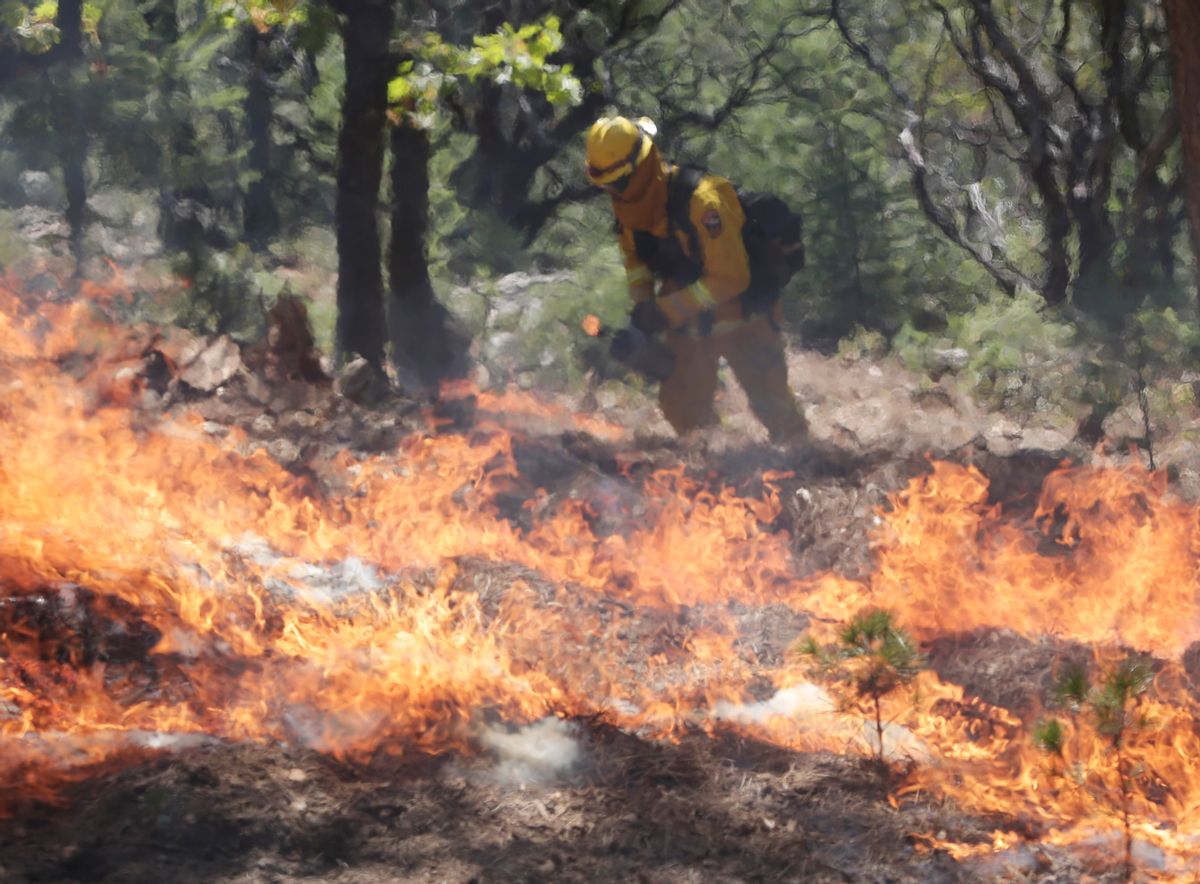 AP10ThingsToSee - A firefighter sets a controlled burn with a drip torch while fighting the King Fire on Tuesday, Sept. 23, 2014, in Mosquito, Calif. Strike teams from Fresno and El Dorado Cal Fire worked in conjunction with department of corrections crews in an offensive firing tactic, intended to take away fuel from the main fire. (AP Photo/Marcio Jose Sanchez) (AP)
--

PLACERVILLE, Calif. (AP) — Helpful rains and more than 8,000 firefighters brought solid advances against a huge wildfire in Northern California as evacuations dwindled and the number of threatened homes was reduced from thousands to just a few hundred.

Calls for evacuation in two communities were reduced from mandatory to voluntary, leaving just one neighborhood under strict evacuation orders, the El Dorado County Sheriff's Department said in a statement. It wasn't immediately clear how many people remained away from their homes.

The rains had brought fears of flooding and dangerous conditions in the King Fire's huge burn area east of Sacramento, but they remained light and helpful to the firefight. A flash flood warning in effect for several hours was called off in early evening.

By Wednesday evening, state fire officials said fewer than 300 structures were still threatened. They put the figure at 12,000 when the day started.

The blaze was 55 percent contained — up from 43 percent at the beginning of the day — and showed no growth after burning almost 150 square miles and destroying a dozen homes near the town of Pollock Pines.

"The rain is definitely allowing the firefighters to make progress on containment," said Dana Welsh, a spokeswoman for the U.S. Forest Service.

Large areas of the fire remain uncontained, so the blaze could still spread when the rain stops, Welsh added.

Forecasters say more rain could come on the weekend, and fears remained that it could lead to mudslides and slippery roads that could make firefighting more dangerous, Welsh said.

Wayne Allen Huntsman, 37, has been charged with starting the fire. He has pleaded not guilty to arson and remains in jail on $10 million bail

The fire has become the second priciest blaze in California this year, costing more than $50 million to fight since it began nearly two weeks ago. The state spent more than $85 million fighting a fire in Klamath National Forest along the California-Oregon border.

The blaze is one of nearly 5,000 wildfires in California this year, a 26 percent increase compared with an average year of about 3,900.