From "Fast Times at Ridgemont High" to "Wetlands," the most memorable autoerotic moments on the big screen 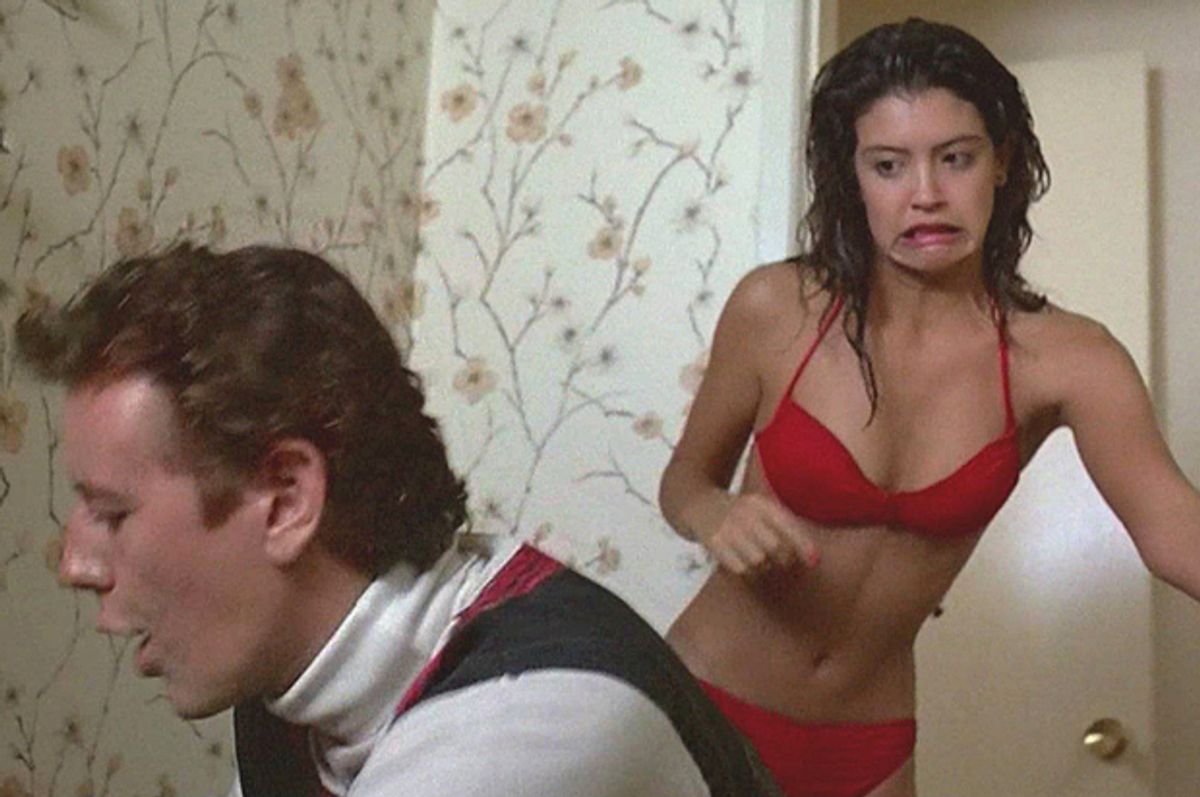 "Wetlands," which is currently in theaters, features two sure-to-be-notorious scenes of self-pleasuring. Early on, Helen (Carla Juri), the film’s 18-year-old heroine, selects vegetables from the family fridge to determine which is best for achieving orgasm. Later, she recounts a “special topping” on a pizza, and director David Wnendt not only dares to show the four erect men ejaculating, he captures the fantastic splatter of semen colliding in mid-air — in slo-mo no less.

Films depicting self-abuse have ranged from smart to sweet to silly. Here are a handful of popular American movies and a few foreign films that touch on the subject of touching one’s self.

"Fast Times at Ridgemont High": Arguably the most classic scene in the classic '80s film involves Brad Hamilton (Judge Reinhold) fantasizing about Linda Barrett (Phoebe Cates) while she’s in the pool, and he’s in the bathroom. As he imagines her not only undoing her bikini top, but also confessing her long-held secret attraction to him — before kissing him — Brad works himself toward climax. Until the spell is broken when he is rudely interrupted. Legions of teenage boys also fantasized about Phoebe Cates and likely rubbed VHS copies of the film raw playing that scene over repeatedly in their VCRs.

"There’s Something about Mary": When Ted (Ben Stiller) takes the terrible advice he’s given to rub one out before his date with his dream girl Mary (Cameron Diaz), the hilarious hair gel scene follows. But what is notable about this classic masturbatory moment is not just the way Mary’s hair stands erect on her head, but Stiller’s eying it throughout his conversation with her, reminding viewers (while trying to forget what he’s done) about the sticky situation he is in, and the seminal fluid that caused it.

"But I’m a Cheerleader," directed by Jamie Babbit, has Megan (Natasha Lyonne), sent to True Directions, a “rehab” camp to be “straightened” out because she is thought to be a lesbian. Of course, the camp is as camp as Christmas, with stereotype sissy boys and butch girls endearingly trying to fight their same-sex desires. Megan’s developing crush on Graham (Clea DuVall) generates feelings that she expresses with her hand rubbing furiously over her panties. It was controversial enough for the MPAA, which initially spanked the film with an NC-17. Babbit fought the decision, and "But I’m a Cheerleader" was later released with a hard R.

"Tie Me Up, Tie Me Down": Pedro Almodóvar's crazy story of an escaped mental patient (Antonio Banderas) and a former porn actress he kidnaps (Victoria Abril) was one of those films just explicit enough to cause censors to panic. A particular scene that was objectionable involved Abril’s character pleasuring herself in the tub with a ticklish, probing bath toy. Considering the fact that this film — which Almodóvar treats as a dark romance — contains both bondage and abuse, it’s surprising that the sex scene is the one causing knickers to be twisted. The Spanish enfant terrible previously spilled seed in "Matador," as Banderas played a character who plays with himself while watching torture on TV, and later in "Kika," where a character ejaculated over a balcony.

In "Y Tu Mamá También," Tenoch (Diego Luna) and Julio (Gael García Bernal) can’t seem to stop talking or thinking about sex. While the guys can’t seem to keep their pants on — and neither Luna nor Bernal is shy in that regard — one of the more interesting scenes has them fantasizing about teachers, their girlfriend’s moms and even Selma Hayek as they jerk off on the country club’s diving boards, and pollute the pool in the process.

"Cote d’Azur" is a French sex farce about a family spending the summer together — that is, when they are not off stroking off. A running gag involves the lack of hot water in the house because all the characters like to use the shower as a masturbatorium. The film gleefully emphasizes these comical moments, but they do serve the plot. Marc (Gilbert Melki), who is most frustrated by the water issue, calls the plumber, Didier (Jean-Marc Barr), a man he loved before he got married. "Cote d’Azur" proves that fingering the family jewels can indeed lead to finding true love.

"Klown": The hilarious, underseen Danish film (which is reportedly getting an American remake) has Frank (Frank Hvam) being encouraged by some buddies to give his girlfriend a “pearl necklace.” They insist it is a grand gesture that shows his love for her. But this is not the expensive kind of pearl necklace one buys in a store; rather, it involves a vigorous bout of spanking the monkey, all over his girlfriend’s neck and breasts while she’s sleeping. Even if Frank’s girlfriend would enjoy that “present” — and that in itself is debatable — "Klown" shows how Frank mis-delivers the “gift” — right in the eye of his girlfriend’s sleeping mother.