Climate truthers are losing it: Conservatives' anti-science crusade stoops to a new low

Welcome to the bizarro world where climate change is still a hoax and 400,000 protesters are merely litterbugs 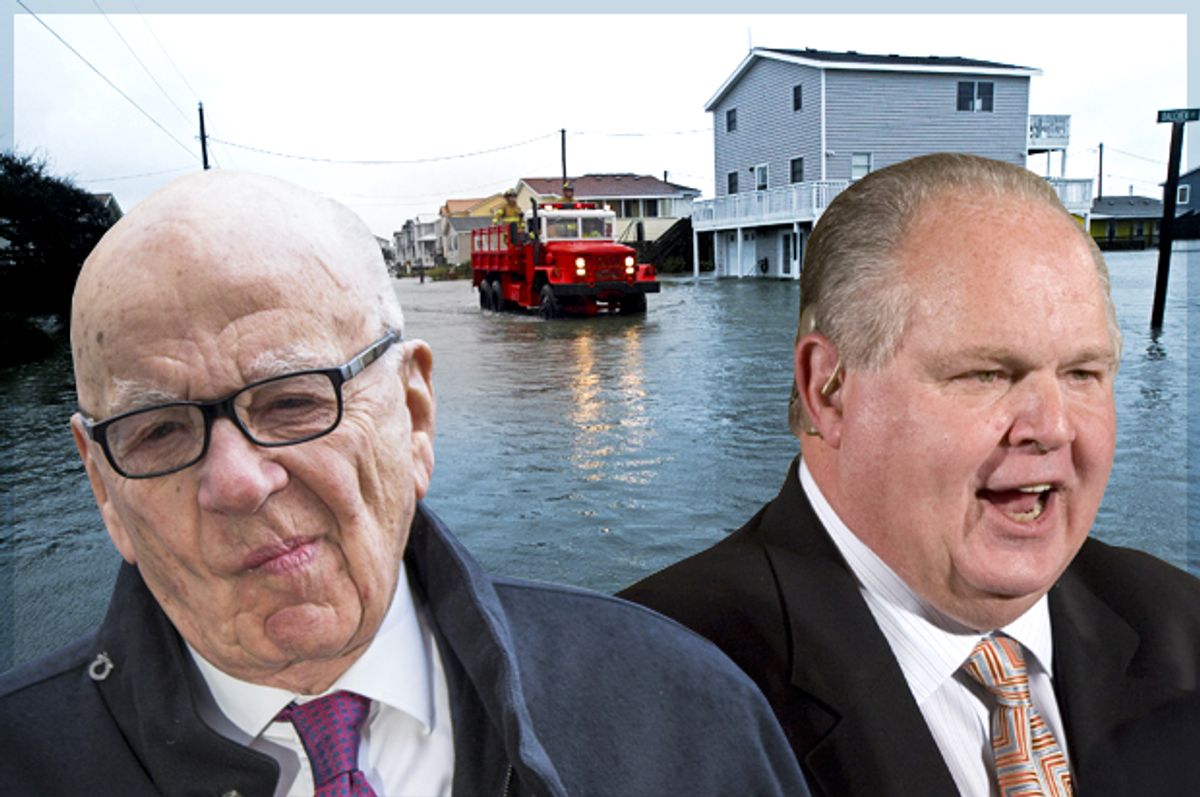 This past week was a big one for climate change. In other ways, of course, it was like every other week for climate change. It began when hundreds of thousands of people took to the streets, in New York and in 160 countries around the world, to demand action on an issue that affects every person on Earth. Those protests were subsequently ignored by the Sunday news programs.

And that was generous, it turns out, considering how the right-wing media chose to cover the protests. Looking only at how Fox News, Breitbart and the New York Post, among others, were covering the news, you would be forgiven for thinking that the most notable thing that happened was that protesters left some litter behind.

Nary a mention, in other words, of what a huge deal it is to have nearly 400,000 people mobilize for the climate, of what was the biggest and most diverse showing, by far, of Americans expressing true concern over climate change. The only thing that put a damper on what activist Bill McKibben called "the day the climate movement came of age" was the fact that it had come so late in the game, at a point when drastic, heroic efforts are called for to prevent dangerous levels of warming.

Well, that, and the fact that a march that included everyone was still missing one important group: Republicans. The constituency who, as a political body, rejects the one belief that everyone who did show up shares: that climate change is a big, serious deal and that the government has to do something about it. Here's David Roberts' sobering assessment:

As long as climate sanity is defined as heresy in the epistemologically vacuum-sealed Fox bubble, no conservative lawmaker will touch it with a 10-foot pole. It doesn’t matter if you get a million or 10 million people marching in the streets — as long as you don’t get any of the resentful white guys who vote Rs into office, Republican reps won’t care. To see all those unions and brown people and professors and feminists and queers gathered in one place, shouting for an international treaty, just confirms their worst fears. (Of course, to be a conservative in America today just means having your worst fears confirmed 24 hours a day.)

That's a shame, because climate sanity isn't necessarily at odds with conservative politics. Represented at the climate march were stereotypical tree-huggers and people who believe that the climate crisis won't be solved without the complete dismantling of capitalism, to be sure; but the sheer numbers involved meant there was plenty of room for diversity. Another potential solution to climate change, of course, is a market-based approach to reducing greenhouse gas emissions. It's been called "the Republican case for climate action."

But Republicans can only back their preferred method of climate action if they first agree that climate change is a real, serious problem. And unfortunately, they haven't gotten there yet.  Witness, for example, the number of flat-out falsehoods that National Review editor Rich Lowry managed to squeeze into one climate march-bashing column, in which he both questions humanity's influence on the climate and revives the long-debunked conspiracy theory of the global warming "pause."

Interestingly, Lowry also advises climate marchers to abandon their "anti-industrial apocalypticism" and instead  dedicate themselves to causes that "would have an immediate positive effect on human welfare." But here's the thing: Cutting CO2 emissions, in fact, would have an immediate, positive effect on human health. The American Lung Association predicts, for example, that the EPA's new power plant rules will prevent up to 4,000 premature deaths and 100,000 asthma attacks in just their first year; that's not to mention all the other ways that climate change threatens public health.

And the willful misrepresentation of this week's climate actions goes even further.

Tuesday, President Obama addressed 120 world leaders at the United Nations headquarters, hoping to build momentum and enthusiasm for a global climate treaty that, if all goes well, could be our last, best shot at averting catastrophic climate change. That is, unless we're going by Fox News' version of events, in which case the speech was the latest step in Obama's conspiratorial, scaremongering campaign to give the government control over our energy choices. (Yet somehow, it's the climate scientists who are living in a "fantasy world.")

Rush Limbaugh, unsurprisingly, insisted that the president was addressing the U.N. on "something that is not happening." In Limbaugh's bizarro world, "the debate about global warming due to increased levels of CO2" is over, not because the science on that is settled, but because that science is "a total joke."

The ultimate test of anti-science sentiment, of course, is to see what climate deniers do when confronted with science that actually appears to confirm their views. Which is why this study, published Monday in the Proceedings of the National Academy of the Sciences, was brilliantly timed. The researchers found that warming in the Pacific Northwest over the past century can primarily be explained by natural wind patterns, not human activity -- the perfect bait for those looking for any shred of evidence to hold up as "proof" that climate change isn't happening.

Fox News, in its coverage of the U.N. climate summit, provided the perfect example of this:

While the Climate Summit has undoubtedly raised the profile of the U.N.’s green agenda, skeptics continue to question the effort to cut carbon emissions, particularly its impact on global economic growth.

“If you look at the big picture of fossil fuels, at the positives and negatives, the only conclusion to draw is that it’s imperative to use more of them, because they are so beneficial to human life,” Alex Epstein, founder of the Center for Industrial Progress, and author of the forthcoming book The Moral Case for Fossil Fuels, told FoxNews.com.

On Monday a study reported that rising temperatures in the Pacific Ocean off the coast of North America over the past century followed natural changes in the wind, as opposed to increases in greenhouse gas emissions.

If you're keeping track at home, the train of thought here is that one person arguing we need to use more fossil fuels, plus one study about climate patterns in one region of the United States, constitutes the body of skepticism that somehow undermines the entire premise of the U.N. summit.

Were the researchers surprised by their findings? Climatologist James Johnstone, one of the study's authors, calls the result "mind-blowing." But it's important to remember, as the L.A. Times points out, that these findings have to be considered very, very carefully: "The study focused only on trends at the regional level and did not offer conclusions about the influence of naturally occurring winds on warming throughout the world. If anything, the results reinforce what scientists have known for years: that global climate projections fall short in predicting how temperatures are actually changing at the regional scale."

Unfortunately, that nuance was lost on Rush Limbaugh, who, citing the L.A. Times, insisted that the study "totally debunks a major spoke of the wheel of global warming."

None of this denialism is new, but man, does it present an ugly contrast to the testimonies of world leaders at the U.N. -- like, for example, Bosnian President Bakir Izetbegović, who spoke of floods that cost almost 15 percent of his country's GDP, or to Anote Tong, president of Kiribati, who proclaimed, "I've been shouting about climate change for so long, I have lost my voice."

Listen to Limbaugh deny the existence of climate refugees, and listen, via Media Matters, to Fox News' Greg Gutfeld feign concern for the world's poor by suggesting that climate action will actually harm them:

Then listen to the poem that opened the U.N. climate summit, delivered by Marshallese poet Kathy Jetnil-Kijiner, about the ways that sea level rise and extreme weather threaten her family and millions of others living in poor nations, who are disproportionately threatened by the effects of climate change:

If I had the choice, I'd take living in the reality in which global warming is a massive communist hoax perpetuated by corrupt scientists and liberal alarmists over the world Jetnil-Kijiner describes. Every time. Unfortunately, only one of those is the world we're actually living in.