The "Community" creator on his new documentary, his polemical career and why he is rooting for network TV 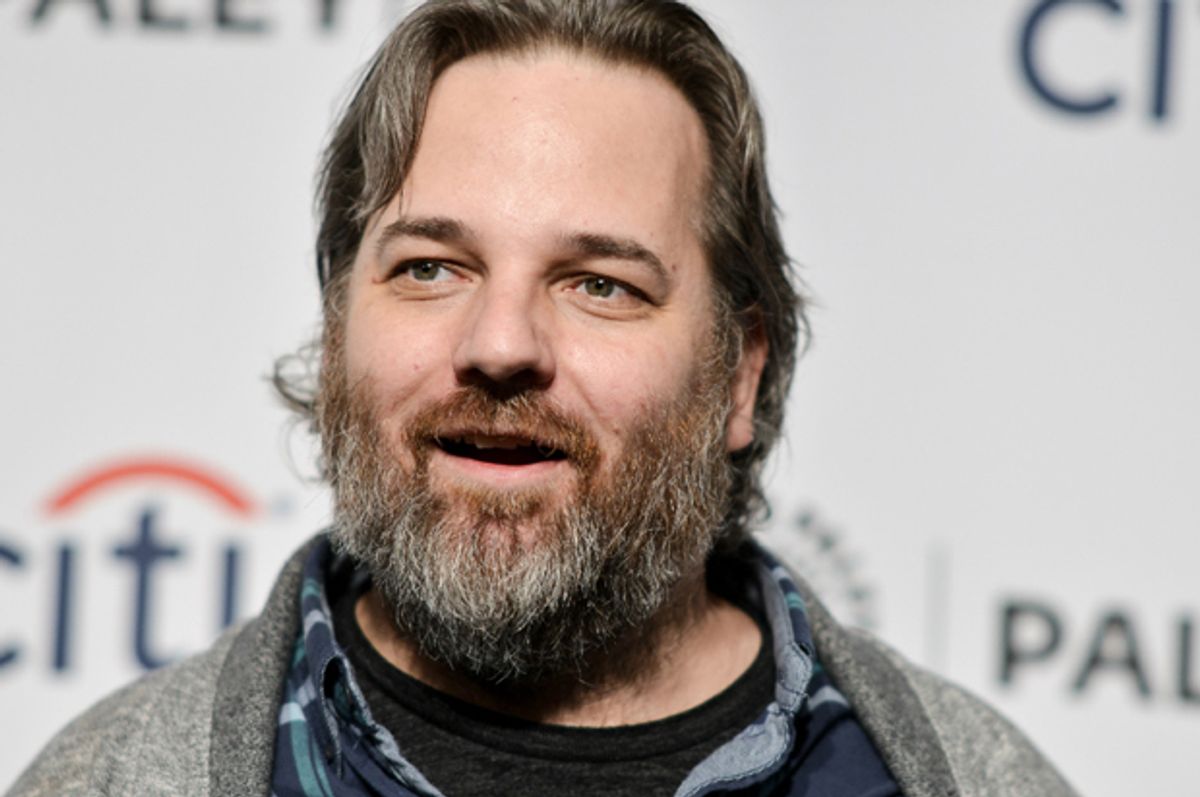 The "prestige TV" era has been defined by iconoclastic, hard-driving showrunners -- David Chase of "The Sopranos," Matthew Weiner of "Mad Men," David Simon of "The Wire." And yet one of the most famous, and most famously difficult, showrunners of the century is best known for an NBC sitcom.

Dan Harmon, after years in the wilderness (including his firing from Comedy Central's "Sarah Silverman Program") saw his often-esoteric college comedy "Community" launch on NBC in 2009; three years later, he was fired from his own show due to extreme tensions between him and executives. The new documentary "Harmontown" (to be released Oct. 3) depicts the period of Harmon's life immediately following his firing, during which he busied himself by procrastinating on pilots for CBS and Fox, neither of which ever saw air, and by undertaking a booze-fueled national tour for his Harmontown podcast.

Neil Berkeley, the documentary's director, told Salon that "there's a lot of stuff in the movie that is honest and I know people find that abrasive... The drinking is part of his lifestyle, and it is an issue for his health. He shouldn't drink so much." And yet Harmon's slow-motion deterioration, getting blackout drunk onstage as his fans cheer him on, also reveals his deep anxieties as a comedy creator and his wearying perfectionism. Many scenes depict Harmon, drink in hand, endlessly revising overdue scripts. It hardly looks easy to be Harmon.

Things turned around after the Harmontown tour; the creator was reinstated for the fifth season of "Community," and a sixth season with Harmon on staff is to air on Yahoo! Screen. Harmon spoke to Salon about the state of the television business and taking criticism.

Which comes more easily to you -- performing as yourself, or writing for characters?

It's certainly easier to perform, because writing is like that in 100 iterations. The first step of writing is to be yourself, and talk about things, and try to find stories within that. It's much easier to barf stuff into a microphone.

In the documentary, we see you "barfing" -- speaking pretty freely to small audiences. We also see you getting endless notes from CBS executives while working on a pilot script that never made it to air. Given the level of scrutiny your scripts get from networks and how free you're able to be when acting as a free agent, is it worth it to keep trying to make TV?

Either one is what you make of it. If you want to reach millions of people in a beloved medium like television, you can make the best or the worst of the fact that it comes with executives giving you notes. You can recognize people have seen a lot, and they might have valuable reactions. The truth is -- either one. All feedback is just feedback and you can do good things with it or bad things with it.

If you're looking for reasons to get upset with broadcast television as a medium, you'll find them at every turn. But there are opportunities... Despite what people may think about me because they read my blog and think "difficult to work with" means not taking notes" -- I find that aspect of the process therapeutic. It releases me from a dangerous level of perfectionism and pretentiousness that might cause what I write to be less accessible. The side of me that says "I want this to be the best thing ever" -- that perfectionist guy might make something brilliant someday but he's not going to accidentally make "Cheers," either. When it's edited together on film, hearing every note you get -- it seems overwhelming. But the alternative to that would be a non-contractual collaborative environment where they could come to your house and watch you type. You schedule these calls instead and they have a window to make their thoughts clear. Why CBS is the best, and why they're winning, is that they have a machine working. They give page numbers and notes, and you execute them.

Do you worry that your reputation will cause you to never work in TV again?

"Worry," maybe, is the wrong word? I'm cognizant of the possibility that the things I do will affect everything in my next list of options. If I'm not ever going to write a script for a certain network that they're going to like, let's find that out. It's a big, fragmented business with a lot of desire to find anything that might work. In this new age, there's room for loudmouths like me that are just a little more visible. Maybe it counts against me in one room and counts for me in another room. Maybe television falls off the map, but in an alternate timeline where it doesn't, I spend my life focusing on television instead of a movie I might write. All we can do is be honest and try to make people happy. Me worrying about how this is going to affect me if I say or do this -- that version of me is the least charismatic in the world. He makes the least people happy. I'm not a strategist and I'm not a diplomat. When I am allowed to say what I want, I'm not saying things that are bad. I don't recommend my path to anybody but me. I don't know if it's working more than a different path, but I'm not good at any other.

Are you rooting for the networks to succeed? Will you be sad if they go away?

This time of fragmented audiences -- we're calling it the golden age of television and I don't think that's entirely bullshit. A network where you're happy with 2 million people watching at once allows you to explore more. Maybe it doesn't matter how many people saw a Tylenol commercial on a given night and you can abandon that standard for everything but "American Idol," and make things that are addictive, inspired by the kind of things that motivated ancient Greek poets. All kinds of things are happening for creative people. And if you talk about television as an art form of "things that aren't movies," it'll be around forever. I guess I'm rooting for the ultimately toxic mass opiate broadcast one way from a giant antenna from the top of the earth to get people to buy shampoo with programs about a person who never existed and never could exist, convincing him his ambitions are futile so he can stay at home on the set until the next week... I want that to die. But it's almost more tempting than ever, though, to not run away from television, because the definition is so loose. If you're watching Kevin Spacey for 20 episodes one night with popcorn in front of you and the next night you're watching a prequel to a Vince Gilligan show starring Bob Odenkirk...

Since the podcast is a continuing form of entertainment that "isn't movies," do you think it has anything in common with television?

With anything where you don't walk in and watch Keanu Reeves fight a robot and walk out -- well, movies are about achieving blockbuster status and giving you a complete experience in three acts and generating lots of money over a given weekend and more as a franchise develops over years. TV and podcasts share a quality of wanting to be in your life constantly. You're focused less on making Keanu Reeves look good as he fights the robot and more on finding ways to make people feel comfortable, feel intrigued, and want to make room in their lives for you.

Do you worry that the podcast and stage show are so insular as to preclude you from making any new fans ever again?

I don't worry about anything about "Harmontown;" I wouldn't have given it that name if I were worried about competing with Twinkies for a place in people's lives. With the movie, I want people to see it, but I don't want to trick people. In the best-case scenario, there are waves of people who see the movie because they were on board. But what I really want, and see the possibility for, is that over a slightly longer period of time there'll be surprise -- that this movie is worth watching for someone who doesn't know who I am, as interesting as a documentary about any random gardener, forklift operator, or guy who makes sushi. The early reviews have all mentioned it might be "worthwhile for people who don't know who he is." That's the jackpot.

Do you feel resentful about promoting this small indie documentary about a stage show that played to tiny crowds rather than a new TV show -- or do you just feel fulfilled you were able to do even the documentary?

It's -- uh -- more the latter. I have nothing to complain about. I don't feel like an underdog. I feel fringe, maybe. I feel like I have a more focused, if ultimately smaller, potential appeal. I won the lottery of being one of those guys.