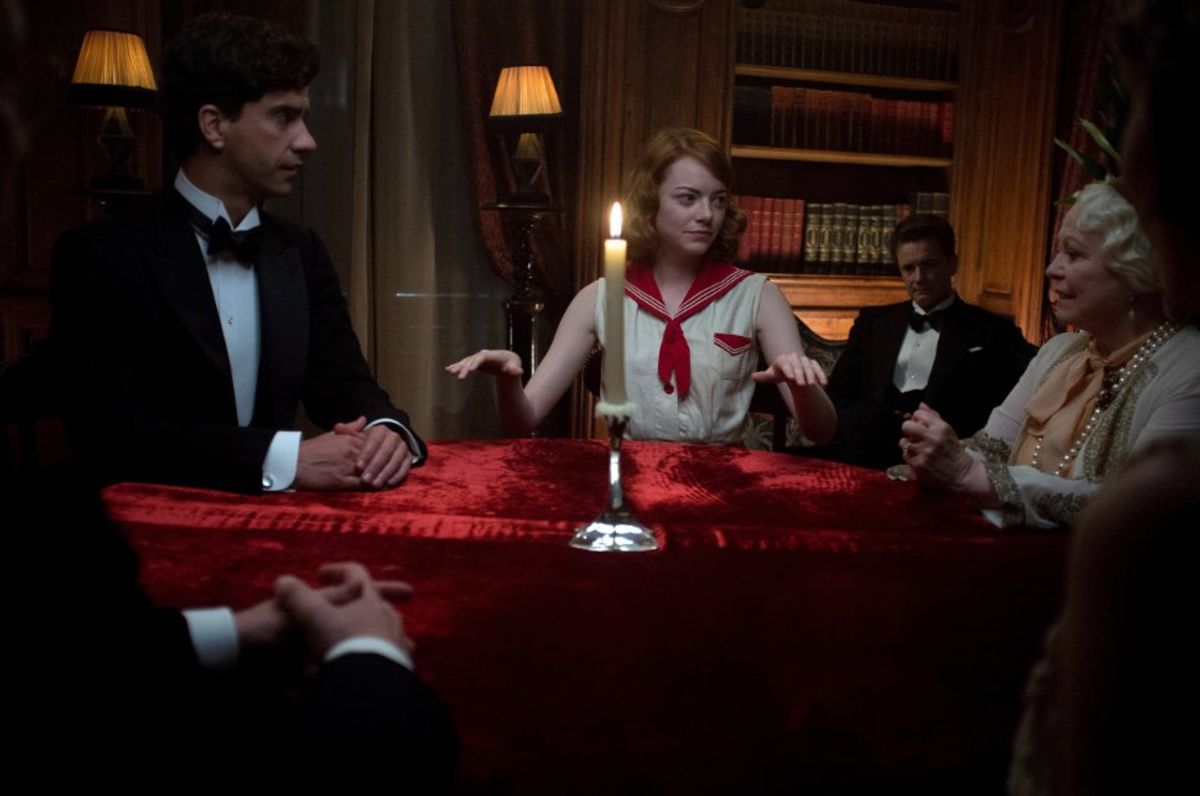 Scene still from "Magic in the Moonlight"
--

It struck me, when reading Brook Wilensky-Lanford’s review of Magic in the Moonlight—in which she notes that Woody Allen’s film is “based on a story that’s almost too good to be true”—that attention to Allen’s true historical referents only complicates things for the better. For the magician referenced by Colin Firth’s “Stanley Crawford” is not Harry Houdini—or, not Houdini only—but (also) Chung Ling Soo, née Billy Robinson. And Robinson is far more interesting than this representation of him, especially on the subject of spiritualism.

By way of review: In Magic in the Moonlight, Stanley Crawford accepts a challenge to expose the presumably fraudulent, gold-digging machinations of psychic medium “Sophie Baker” (played by Emma Stone). In time, Sophie’s psychic powers have Stanley second-guessing his secularist assumptions, and—after much miscommunication and many allusions to the erotics of exposure—the (seemingly) cynical Stanley and the (seemingly) credulous Sophie meet somewhere in the middle.

By minute 90, the audience has been transitioned too, through Allen’s own sleights of script, from Stanley’s once-strict Nietzscheanism (“I think Nietzsche has disposed of the God matter rather convincingly”) to Sophie’s less nihilistic take (“we need our illusions to live”).

All of this makes for dramatic (if predictable) storytelling, cinematic synthesis and the like. And historians of stage magic, spiritualism, and Nietzsche will find much to applaud and critique here. But I’d like to focus briefly on the life of Billy Robinson and how it points to the ambiguities inherent in most professional magic careers of the time. To wit: there are very few “pure types” of the sort represented by Stanley. Even the most vociferously anti-spiritualist magicians encouraged with one hand what they squashed with the other.

Born to an Irish-American family in New York in 1861, Robinson came to prominence as a Chinese magician in London around the turn of the century where, in 1905, he waged stage-war with—and won the title “The Original Chinese Conjurer” from—Ching Ling Foo, the native Chinese magician from whom Robinson had actually stolen his Chung Ling Soo act.

In 1898, before leaving the U.S., Robinson had published, under his own name, an anti-spiritualist exposé, the material for which he had gathered during an earlier stint working at a spiritualist parlor in Chicago, and through continued communication with ex-colleagues there. Robinson died in 1918 after a rigged gun fired a real bullet during the Chung Ling Soo trick “Condemned to Death by the Boxers.”

Legend has it that, upon being shot, Robinson cried out in English, thus shattering the longstanding impression that Chung Ling Soo was, in fact, Chinese (though contemporary reports belie that notion).*

It’s all rather fascinating: from the Chicago spookhouse to the Yellowface act to the fights over, and oversights of, “authenticity.” Not least is the fact of Robinson’s flip-flopping career as a sometime spiritualist sometime anti-spiritualist.

That magicians and spiritualists did battle is no surprise. Their turf-wars over the meaning, mechanics, and professional locus of “phenomena” are the stuff of familiar history: on the big screen, on TV, on the stage, in the academy, in court, and otherwise. Moreover we know that some anti-spiritualist magicians cut their teeth—or paid their bills—early in their careers as physical mediums. (Houdini is among these, and his so-called “redemption” has been narrated in terms of guilt, morality, undercover research, and/or American acculturation.)

What we know less about, though, are the ways in which such mediums and magicians collaborated in their antagonism. In our collective fixation on repentant con-artists turned heroic myth-busters (Houdini) and cocksure secularists softened by the “real magic” of love (Stanley), we have paid insufficient attention to the (rather more common) “humbug” in history: those playing to both sides of the apparent magic/medium divide.

There were, for example, Julius and Agnes Zanzig, whose mentalism act neither confirmed nor denied spirit aid; Hereward Carrington, a scientific debunker turned manager for medium Eusapia Palladino; and Zanzic (not to be confused with the Zanzigs), chief operator at Robinson’s Chicago spookhouse, who worked variously as a spiritualist and an anti-spiritualist. These were people for whom professional identities were neither singular nor static; and people for whom professional ‘development’—e.g., from medium to magician—was neither direct nor teleological but rather situational, cyclical, or unnecessary-because-beside-the-point.

“The point” for them was, perhaps, to put their audiences in positions of discernment analogous to those of Woody Allen’s audience. Whether by moonlighting as magicians debunking their own day-jobs by working in tense tandem with their seeming opponents, or by framing their stage-shows with elaborately contradictory claims, the point was to represent and reconsider the ambiguities of lives lived well within the bounds of staged theses and antitheses.

It was to perform séances or spiritualistic send-ups before crowds similarly primed to look for winks and wires; or to perform “Chung Ling Soo” while knowing full well that audiences saw also “Billy Robinson.” And it was, finally, to encourage crowds to cry bullshit! in the faces of both a Sophie and a Stanley, all-the-while encouraging them reread Nietzsche on the way home from the theatre if only to distract them from the thought that they had just been “taken” for the cost of a decent meal.

Was the movie worth the ticket price? I think so, but then again I am a fan of stage-magic history and (references to) Nietzsche. And I’m less inclined than others to complain about Magic in the Moonlight being a “hollow shell,” because, well, I think the raison d’etre of magic itself is to create miniature containers for critical thought. My only hope is that, even with our persistent fascination with synthetic magic stories, we do not overlook the fun of narrating the interstices—the spaces of clear-eyed ambivalence—in greater detail.

Put differently, my hope is that we no longer merely end our stories (as Allen does here) by marrying a Sophie and a Stanley, but rather that we begin to ask new questions precisely there. What would they do next? How might they continue to represent or perform spiritualism? In what ways are spiritualists and anti-spiritualists already married?

To these ends Billy Robinson might be as good a guide as any. In my humble opinion the mandeserves a movie—if not precisely this one.