I'm cheating on you right now

An admiring like on your Facebook page. A flirty late-night text. All while my partner's right there next to me ... 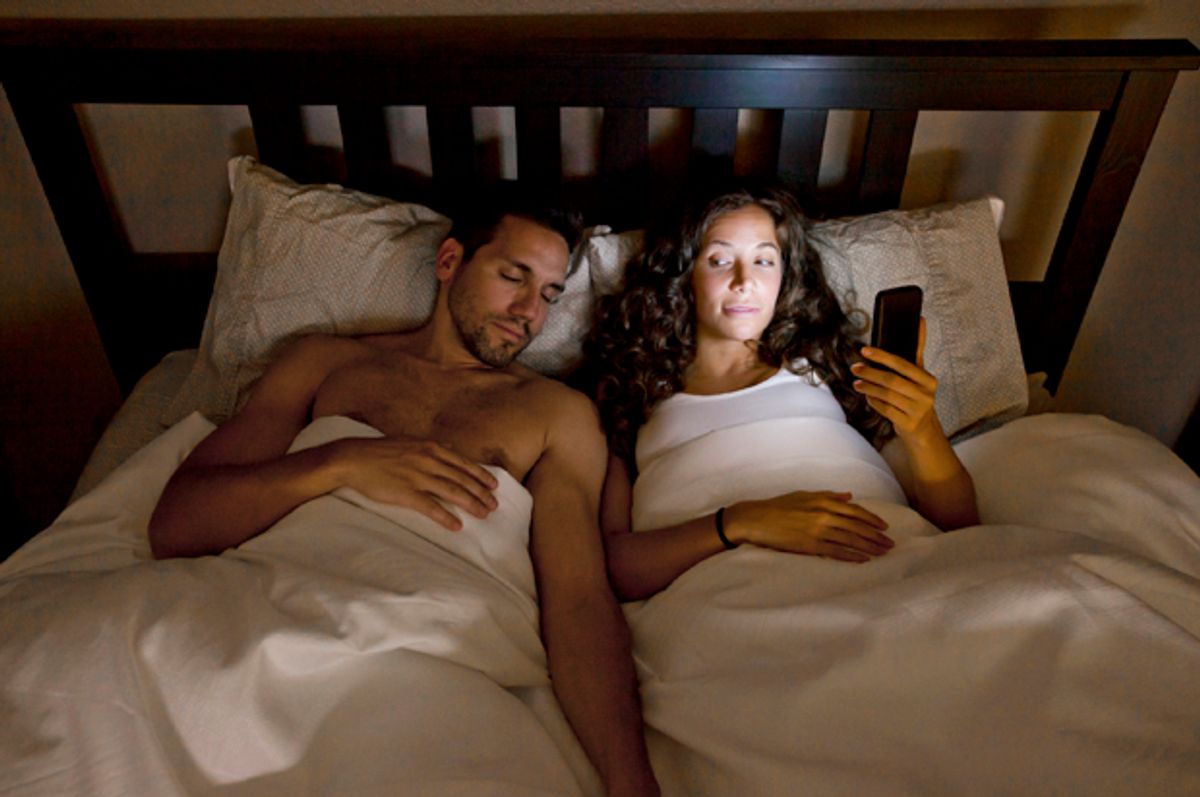 A couple lies side by side in bed, each in their separate worlds, cellphones and laptops glowing in the dark. A text message is sent off at the intimate hour of midnight. An admiring remark on a Facebook profile picture pings somewhere via private message. A winky face is tacked on at the end of an email, or maybe this time it’s an XO. Too flirtatious? All of it can fly through the atmosphere unseen. Until in some cases it is seen, or sensed.

Digital-borne infatuation is commonplace. It was even used as part of a defense in a high-profile corruption trial this month: Former Virginia Gov. Bob McDonnell and his wife, Maureen, could not have been conspiring to accept bribes from businessman Johnny Williams because they were barely communicating. Their marriage was falling apart. And part of the proof, ostensibly, were the 1,200 texts and calls Maureen was exchanging with Williams — evidence of what the defense calls her “crush” on him.

Whether an actual affair took place was never substantiated. But proof of copious communication was there — 52 texts and calls in one particular day. The defense, which failed to exonerate McDonnell, was banking on the suggestion of Maureen McDonnell’s obsessive and inappropriate need to connect.

If anything, the Internet offers volume — more warm bodies, more modes of communication, including Twitter direct messaging, Snapchat and Instagram, and more tools to entice and seduce. What started out a little over two decades ago as a means to convey information is now outfitted for blinding speed and deep layers of privacy.

Emma Bovary had to wait for a letter from her lover concealed in a basket of apricots. Today, those heated pronouncements might come radically truncated, via text. In Don Draper’s "Mad Men" era, wife Betty might find out about Don’s philandering by lifting the receiver upstairs while he’s got his paramour on the rotary phone. Now an actual voice doesn’t need to convey the necessary information. A Facebook message will do.

But it’s far from a fail-safe system. High-profile figures have been brought down sometimes precisely because of ease and speed. In 2011, because of a typo, former New York Rep. Anthony Weiner mistakenly tweeted a picture of his crotch to thousands of followers instead of sending it as a direct message to one recipient (a 21-year-old female college student). Revelations of more online misbehavior followed, and two years later, while running for mayor of New York in July 2013, Weiner was still responding to allegations that he continued sexting, this time under the alias Carlos Danger, even after having resigned from Congress. He denied ever having met in person with any of the women he contacted.

With the scandal surrounding Gen. David Petraeus in 2012, things got more byzantine. The former CIA director’s extramarital affair with his biographer Paula Broadwell was carefully managed: Petraeus and Broadwell used fake names to create Gmail accounts and also devised a system of sharing an email account and saving messages in draft folders, deleting each message after reading it. But the FBI used electronic metadata to trace IP addresses. The head of spies was successfully spied upon, and Petraeus resigned from the CIA after admitting to the affair.

What is everyone looking for in these stabs at connection? The meaning isn’t always clear, but the fact of the pursuit is age-old and crosses cultures. Helen Fisher, a professor of biological anthropology at Rutgers University and the author of five books on sexuality and relationships, points out that the brain “is well built for infidelity. A million years ago, the circuitry was the same.” The hard numbers for cheating, however, have always been difficult to come by. “People lie to researchers and they lie to themselves.”

But recent studies show, Fisher says, that under the age of 40, women are as adulterous as men. The primary force driving that increase is the entrance of women into the workforce in the past several decades. That’s a factor she still considers more powerful than new technology.

With so many men and women out of the house, the field is wide open for extramarital dealings. For someone who is serious about the enterprise, there are shortcuts. The Ashley Madison website calls itself “the leading site for married people looking for affairs and discreet encounters.” Its slogan: “Life is short. Have an affair.” Signing up for the service involves filling out a detailed questionnaire that puts clients’ specific preferences front and center. Someone who is more interested in bondage need not waste time with the person who has only checked “cuddling & hugging.”

One man who spoke on condition of anonymity explained that he visited the Ashley Madison site at the age of 48, as he was floundering in a drifting, sexless marriage. He and his wife had a child and he didn’t want to divorce. “I remember feeling lonely and desperate for connection, and even though it felt ridiculous and embarrassing, I didn’t know what else to do,” he says. Looking at the site led to meeting a woman with whom he had weekly sex dates for six years. Eventually his wife stumbled on an email that tipped her off. Ten years since the initial Ashley Madison meeting, he is still involved with the woman he met.

The remote affair, that slippery new subset of “emotional infidelity,” is a category that sex researchers now include in studies. While Fisher is unconvinced that new technology has radically affected the numbers for infidelity overall, she does concede that “remote infidelity is the kind of cheating that is increasing,” if someone is indeed prone to wander. She believes in some cases it can be just as damaging as “real” infidelity. “If you’re rushing away from the dinner table with your family to check your email, it’s affecting your relationship.” Even Facebook use was found to be detrimental: A study in 2013 at the University of Missouri surveyed 205 Facebook users aged 18–82 and found that “a high level of Facebook usage is associated with negative relationship outcomes” such as “breakup/divorce, emotional cheating, and physical cheating.”

Psychologist Dr. Adelia Moore, who has been in private practice in Manhattan since 2000, says, “The primary phenomenon that I notice with new technology is the role of texting, whether in infidelities or in ongoing relationships. It functions as an enormously intimate and immediate modality, fraught with possibilities for connection, but also for misunderstanding, hurt, and betrayal.” Texting is a deceptively simple delivery system, and a false intimacy can quickly spring up, a sense of closeness that has not been tested in day-to-day life. “Texting feels as if it is going on just between you and the other party, it can feel like a whisper in the other’s ear, but one does it on a device, often in the presence of others, with the illusion, it sometimes seems, of being invisible.”

Maureen McDonnell’s whispers were not hard to detect, nor were Weiner’s or Petraeus’ or the man from Ashley Madison. Underneath it all lay a digital trail. But people will keep taking the risk, and while all this seemingly invisible activity goes on across millions of screens of various sizes, the same basic stories play out that have always played out, fueled by hope, disappointment, euphoria, pleasure and pain. Excitement is being courted, secrets are being held. And somewhere, hidden in a virtual basket of apricots, a message is waiting to be found.