You don't "have nothing to hide": How privacy breaches are quietly controlling you

Government data collection is scary for many reasons. But least understood: what it does to our personal creativity 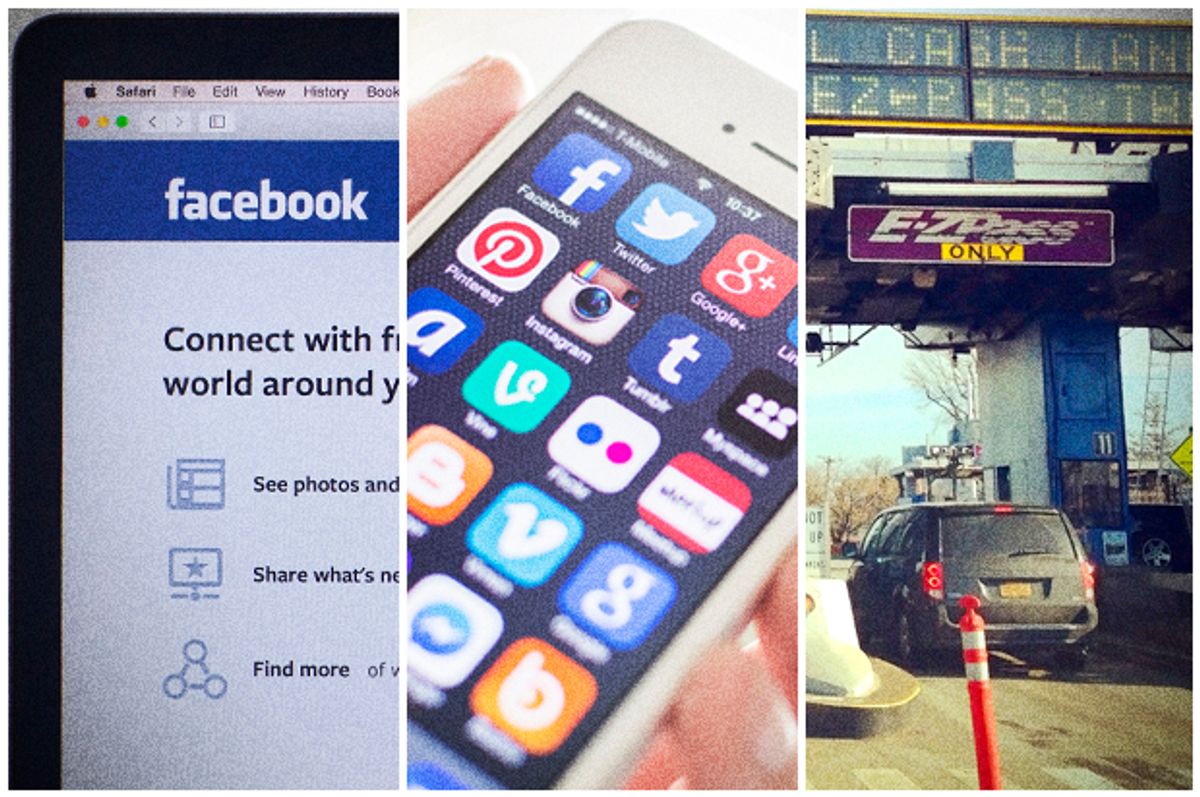 Edward Snowden’s leaks reminded us about the extent to which the notion of privacy is no longer our own. The last few years have brought home the fact that between the telecommunication companies, street surveillance cameras, tollbooth cameras and EZ-pass, and corporations such as Google, Apple, Microsoft and Facebook, virtually no aspect of our lives is immune from the intrusive watch of some agency of the state.

The usual response to this information is: “I have nothing to hide. It doesn’t matter if the state has my information.” Critics like Glenn Greenwald point out one response, along the lines of “OK, hand over your passwords to your email and bank accounts and credit card information.” This is certainly right. This kind of information is crucial to the protection of your money, your private messages to others. Yet, it doesn’t exhaust the other reasons why data collection and invasion of privacy is a problem about which many of us should be disturbed.

Another reason why privacy is important, as Greenwald and many others, including the philosopher Hannah Arendt, have argued, is that privacy is crucial to personal exploration, creativity, dissent — those interests and thoughts that reflect the complexity of human beings and their ability to flourish and lead meaningful lives. But as we also know, creativity and dissent can be disruptive to the smooth functioning of society — making the lives of bureaucrats and autocratic politicians much harder because their authority would be constantly challenged. As Professor Roger Berkowitz, Director of Bard College’s Hannah Arendt Center, suggests in an excellent post on the importance of privacy for Hannah Arendt,

Such independent thinking is dangerous, or at least disturbing to the demands for conformity and correctness of public society. The real reason privacy is in decline today is because the very fruits of a rich private life — uniqueness, difference, and plurality — are scorned by the insistence on uniformity of opinion and behavior in good society. What suffers in the poverty of a meaningful private sphere is politics.

Leading a meaningful life also, and often, means leading a complicated, unpredictable, undecipherable — but not necessarily a criminal or immoral life. I may be having an affair outside of my marriage — but why should this fact be up for scrutiny by the state or even my neighbors? Why should anyone else judge those actions except for myself and my marital partner (and maybe it’s OK with him/her). How does my calling someone on the Pakistan/India border tell the NSA anything interesting about me — unless they are also making huge, overgeneralized judgments based on my ethnic and religious identity? Not only independent thinking, but unruly (read: brown, black, Muslim) appearances are also enough to rouse suspicion. Recently we saw this through the Intercept’s story about the FBI and NSA surveillance of five prominent Muslims, from professors to Republican Party members, to the head of the Council on Islamic-American Relations (CAIR).

But spying isn’t necessarily just about obtaining information. Surveillance is about gaining control. Collecting information on you — whether by the NSA, health insurance companies, the NYPD or a hacker -- is an effort to predict your behavior and then to take steps to box it in, to stop you from acting in ways that are nonconforming (but not necessarily criminal), or to profit from your wayward behavior. We see this constantly: Credit reporting agencies collect all sorts of data about you -- your spending habits, how many credit cards you have, how prompt you are in paying those bills, how many times you’ve been late, what kind of disputes you’ve had with other parties to whom you owe money. The official story for this kind of data accumulation is that they are attempting to assess what kind of credit risk you are. The problem with this is that their inferences about your behavior are often just plain wrong, if not dumb; having had a credit card dispute because I’ve refused to pay a certain charge does not necessarily make me irresponsible. It might instead mean that I’m likely to challenge charges that I think are unfair or wrong — which of course is a negative behavior in the eyes of a mortgage company or an employer (since we now know that employers regularly collect credit information about prospective employees) — the idea that I might challenge inaccuracies or unfairness might mean that I have an obstreperous personality that isn’t actually conducive to the “go along and get along” personalities that employers and mortgage companies value. So that means a higher mortgage interest rate for me.

Similarly, the NSA’s collection of information about my online life — whether I’m visiting the sites of fundamentalist imams or calling someone monthly who lives near the Pakistan/India border, is also an attempt to assess my politics and what kind of company I keep — in order to decide whether I am a so-called “threat” to the national security of the United States. But surfing those websites or calling someone near the Pakistan/India border tells the NSA very little about my thinking process: For one thing, it’s often difficult to know exactly why someone is doing something unless you can actually get inside their heads (Shhh, don’t give the NSA any ideas). Maybe I’m visiting the site because I’m doing a report about Islam, or because I’m skeptical about the news stories I come across that tell me that the imam whose sermons are on that site is a terrorist, or because I’m looking for spiritual meaning. None of these mean that I will or want to become a terrorist — but they do mean that I am doing something that the state finds suspicious, or that they don’t want me to do.

To assume that they can discern whether my intentions are dangerous reduces the complexity of who I am into a simple formula: what I look like determines what I think. But for the NSA, a credit reporting agency or anyone else who is spying on me to determine accurately what I’m going to do — they would actually have to know more about me: that my monthly call to the same person is to a neighbor who checks in on a close relative who doesn’t have a cell phone.

And here is where it gets interesting: When someone says “I have nothing to hide,” this is another way of saying, “I am not the kind of person that the government is looking for. I am neither suspicious nor a criminal. I am not someone who breaks the law.”

But that translation only works if you have never been the object of false suspicion. Because, as we all know, all the information in the world doesn’t, can’t, always explain another person’s line of thinking. It may not matter to someone whose identity has never been subject to scrutiny -- by police, by customs agents, by the TSA, on the U.S.-Mexico border, at routine roadside traffic stops, by campus police late at night — where and how the state collects their data. But for someone who already senses that they seem suspicious to the state merely because of what they look like — because they seem to resemble our public impressions of terrorists or violent criminals or scary people — such collection of data also has the effect of limiting my actions: I'd better not surf this website because I’m not sure how the NSA will interpret it. I’ll stop talking to friends outside the local mosque because I know the FBI is spying on it, and I don’t want to appear suspicious and risk being pressured to become an informant. Even though I — like my blond, white friends — have nothing to hide.

But privacy isn’t just an issue for scary-looking people. It's also an issue for the most “innocent” or “ordinary” of people. In her book "Unpopular Privacy," Professor Anita Allen argues that privacy ought be protected on behalf of everyone, and treated as a foundational good that people should not be allowed to give up. Future Supreme Court judge Louis Brandeis and Samuel Warren argued back in 1890 that privacy was crucial to protecting people’s reputations from tawdry but powerful gossip, among other detriments, regardless of whether it was accurate. As Professor of History Laura Lovett pointed out in a conversation, the penumbra of privacy rights were crucial in the 19th century to protecting the reputations of married (white) women, for whom it was not wrongdoing, but the mere appearance of wrongdoing that could ruin their lives. We may not be living in Jane Austen’s world, but the close link between reputation and ruin still holds for many people, as Canadian citizen Maher Arar can attest.

In a world where people’s peculiarities and pecadilloes are happily exploited by anyone with a Facebook page or blog, our actions are not only unsafe from publicity, but also from misguided and inaccurate scrutiny. A late night drive to clear one’s head will be recorded by GPS tracking systems, and our driving speeds will be exploited by car insurance companies to raise our rates. The corner market where we stopped, or the diner where we had a coffee and shared an innocent impromptu conversation with a stranger — will be ripe for misreading or entrapment by law enforcement agents. These actions, which are fundamental expressions of humanness, in turn will become — if they aren’t already -- sources of anxiety not just for a select few already deemed suspicious, but for the millions of people who believe they too have nothing to hide.