9 weather disasters that climate change made even worse

Heat waves, droughts and floods around the world have human influence written all over them 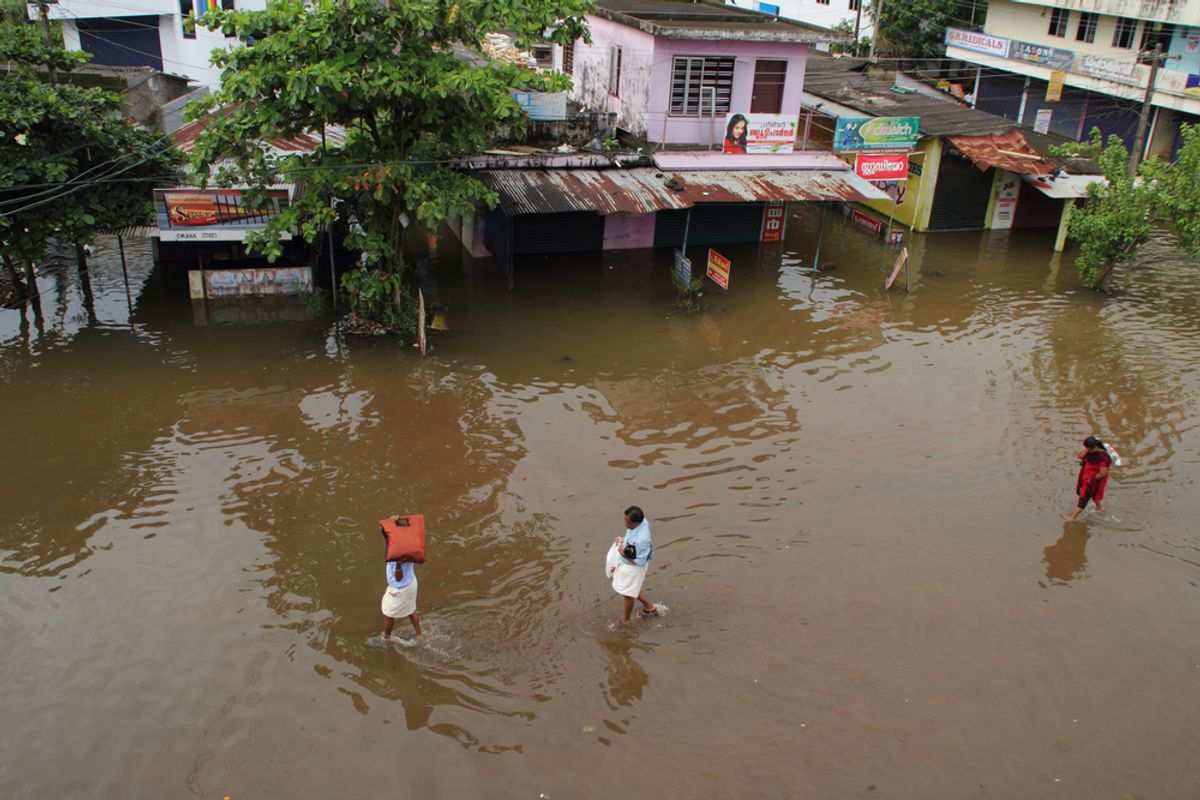 Unidentified people walk on the flood water on June 26,2013 in Kuttanad, India. (AJP/Shutterstock)
--

As we begin to understand the world through the lens of climate change -- and as its effects become not some far-off threat, but something that we're experiencing in the here and now -- it's tempting to look at every drought, heat wave and flood as another symptom of the disease. In the course of writing headlines and searching for connections, of course, we sometimes tend to get ahead of ourselves. Weather happens. Climate change can't definitively be said to have caused any of it. And some extreme events, while foreshadowing what's to come, may have happened anyway, without the influence of climate change.

A massive new study out Monday in the Bulletin of the American Meteorological Society puts 16 of 2013's most notable weather events into a climate context, relying on multiple, independent studies to examine the role climate change may have played in each. The results are a mixed bag: while some, like Asia's heat waves, have climate change written all over them, natural variability won out for the deadly St. Jude Storm and South Dakota's cattle-killing blizzard.

"The science remains challenging," admitted Thomas Karl, the director of NOAA's National Climatic Data Center. All weather, after all, is somewhat influenced by climate change, because all weather is taking place in an environment that's been altered by human activity. In some cases where human influence may have played a role, we don't currently have the tools needed to distinguish it from natural variation.

With the understanding that uncertainty continues to play a role in this sort of thing, here are the nine extreme weather events researchers found were made more likely, and more intense, by climate change.

It was a rainy, rainy spring in the Midwest, where torrential downpours did more than just end the region's drought. The warmer, moister air created by climate change increased the likelihood of extreme rain storms and flooding in places like Missouri, Iowa, Illinois, Wisconsin, Indiana and Michigan -- but turns out to have made Colorado's freak rains less likely.

More than 5,700 were killed amid monsoon flooding and landslides that racked the Indian state of Uttarakhand in July. Researchers found the deluge was a once-in-a-century event made more likely by climate change.

While the U.S. suffered through the polar vortex, 2013 ended Down Under with 123 new heat records, a fitting conclusion to the continent's hottest year on record.  Five independent studies reached the same conclusion: Climate change was definitely behind this one. It could even, the most extreme of those studies concluded, be making such heat waves five times more likely.

Extreme heat coupled with power cuts created dangerous conditions in Korea; in Seoul, lack of air conditioning contributed to an 8.4 increase in mortality during the summer. Man-made warming, one study found, has made heat waves up to 10 times more likely.

Thousands in Japan were hospitalized for heatstroke, and one day in August was the country's hottest ever recorded. Climate change played a "significant role" in this one, too.

The impact of climate change in China has only been detectable since the 1990s, partly because a summer monsoon tends to keep temperatures down. But summer 2013 featured the country's worst heat wave in 140 years; human influence, researchers say, appears to have played a contributing role.

Natural variations may have set the stage for the bone-dry three months that started off the year for New Zealand, but climate change helped make it the most extreme drought in nearly 70 years.

8. Heat and drought in Western Europe

Climate change wasn't responsible for all of the extreme weather experienced in Europe -- heavy rainfall in southern and central Europe, and excessive snow in the Pyrenees mountains, all appear to have been natural in origin. But it did play a "substantial role" in the U.K.'s hot, dry summer, and will likely contribute to similar conditions in the future.

Is climate change to blame for California's ongoing, worsening disaster? That's the money question -- Obama's held the state up as an example of warming's impact -- but the debate still isn't settled. One team of scientists attributed the drought to a large weather system, itself made much more likely by climate change: "We’ve demonstrated with high statistical confidence that the large-scale atmospheric conditions ... are far more likely to occur now than in the climate before we emitted large amounts of greenhouse gases,” explained Bala Rajaratnam, one of the study's authors. But two other teams were less certain. “This is really hard, cutting-edge research,” Stephanie Herring, a scientist at the National Climatic Data Center in Asheville, North Carolina, told Climate Central. In the meantime, the most recent data finds over 80 percent of the state in "extreme" or "exception" drought.