A tale of two books: Why is Amazon giving special treatment to Paul Ryan? 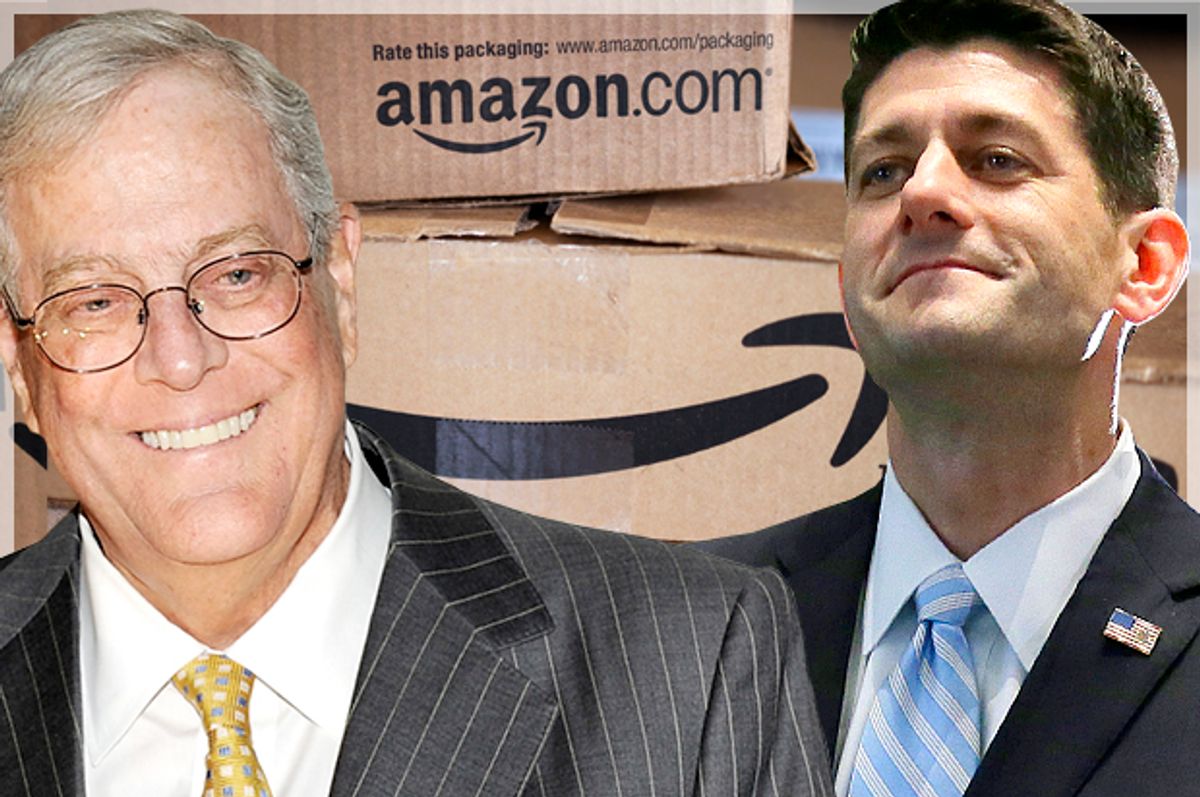 Buried in a New York Times story today about the latest chapter in Amazon’s pricing dispute with the publisher Hachette is this curious nugget: The retailer appears to be giving special treatment to a new book by House Budget Committee chairman and 2012 GOP vice-presidential nominee Paul Ryan.

The Times’ report details how a growing number of prominent authors – including Philip Roth, Salman Rushdie and Milan Kundera – are urging the Justice Department to investigate Amazon for violations of antitrust law. Amazon has been embroiled in a bitter battle with Hachette, which the retailer is trying to force to lower prices. Many authors have rallied to Hachette’s defense, although not all Hachette authors receive equal treatment from Amazon. For instance, the Times highlights, Amazon has removed its discount for a biography of the Koch brothers written by a reporter for the left-leaning Mother Jones. The treatment of that book, which now takes up to three weeks to ship, is a marked contrast to Paul Ryan's "The Way Forward," available for a 25 percent discount and not subject to shipping delays.

Here, courtesy of the Times, is a tale of two Hachette books:

“Sons of Wichita” by Daniel Schulman, a writer for Mother Jones magazine, came out in May. Amazon initially discounted the book, a well-received biography of the conservative Koch brothers, by 10 percent, according to a price-tracking service. Now it does not discount it at all. It takes as long as three weeks to ship.

“The Way Forward: Renewing the American Idea” by Representative Paul Ryan has no such constraints, an unusual position these days for a new Hachette book.

Amazon refused to take advance orders for “The Way Forward,” as it does with all new Hachette titles. But once the book was on sale, it was consistently discounted by about 25 percent. There is no shipping delay. Not surprisingly, it has a much higher sales ranking on Amazon than “Sons of Wichita.”

At this point, it’s hard to prove definitively that Amazon was retaliating against Schulman for writing anything less than a hagiographic biography of the Koch brothers, or that the retailer gave special treatment to Ryan’s book to push a political agenda. But not only is Amazon’s unwillingness to explain the favoritism shown to "The Way Forward" suspicious; Amazon’s war on small retailers, its exploitative working conditions, and its tireless efforts to skirt taxes depends on the advancement of the deregulatory, anti-labor, tax-cutting agenda for which Ryan is a prominent champion.

The company’s unscrupulous practices haven’t stopped it from winning bipartisan fans, however. President Obama visited an Amazon warehouse last year, touting the corporation as an engine of job growth.