Scalia has a secrecy problem: Hiding and hypocrisy at the Supreme Court 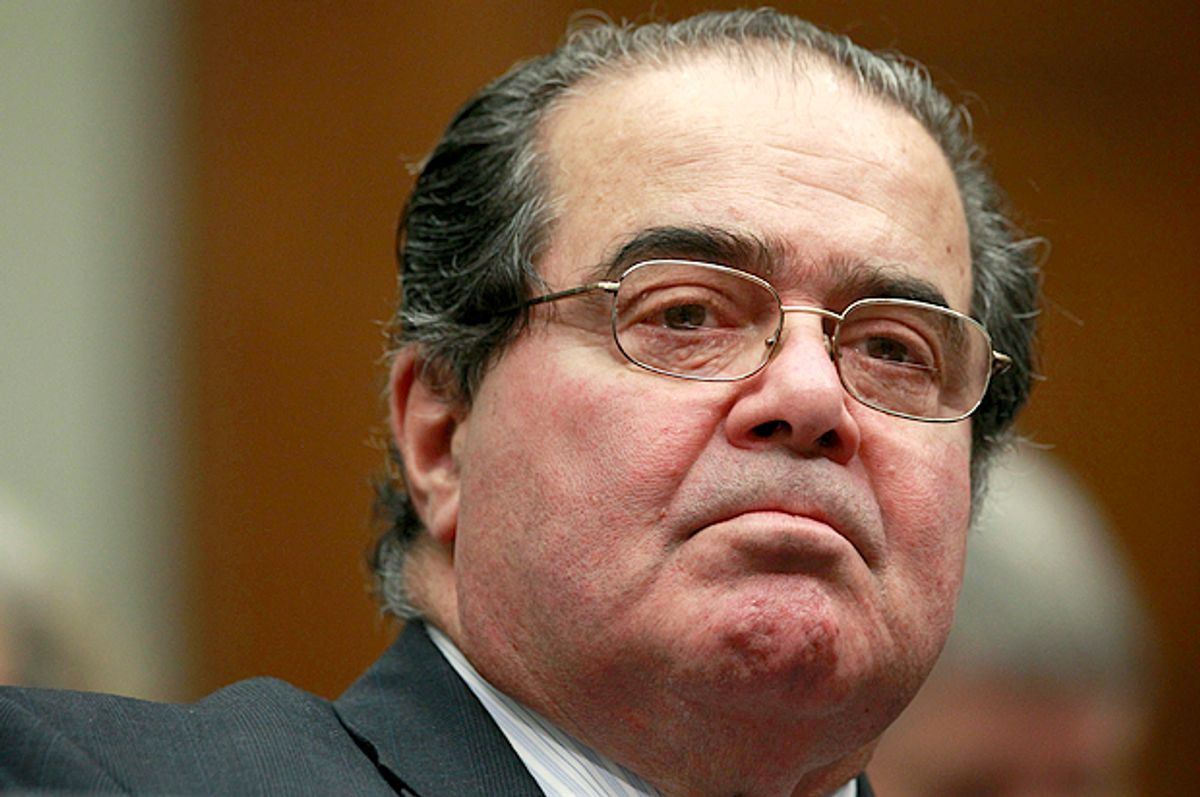 Judge Richard Posner of the United States Court of Appeals for the 7th Circuit said recently, “I don't understand why the judiciary should be the most secretive branch of government. The public probably knows more about the CIA than about the judiciary.”

Now that the United States Supreme Court’s 2014-15 term is about to begin, we should again ask ourselves about that court’s near-total lack of transparency.

During the last week of June every year, the Supreme Court takes over the news cycle with the announcement of blockbuster cases.  That’s great, but June only highlights the secrecy that exists at the court during the rest of the year.  For example, only a handful of people get to see those cases argued by some of the best (and increasingly specialized) advocates in the country.  Why?  Because the court refuses to allow the American people to watch oral arguments on television, or even listen to them live over the Internet.

What’s more, even if the justices had non-frivolous reasons to prohibit cameras at the court’s oral arguments (they don’t), none of those reasons would apply to decision announcement days when lawyer showboating is not possible (they don’t talk, and they often aren’t even there, as the court does not announce ahead of time which decisions it will hand down on which days).  Oh, and the justices have complete and total control over the “hand down” script. But the announcements of decisions like Hobby Lobby (religious freedom) and Citizens United (First Amendment campaign speech) are major moments in American history, and only about 250 lucky folks who happen to be at the court are allowed to witness historical moments in person, in the courtroom.

Recently, Justice Stephen Breyer was asked about the court’s reluctance to enter the 21st century and allow a broad segment of the American people to observe what the lucky few who are actually in the courtroom are allowed to see. He had no specific objections but simply said that “all of us are conservative where the court is concerned. We are trustees ... So I’ll say we’re nervous about it. And probably that’s the most favorable you’ll get. I mean, nervous, uncertain, not aware of what’s going to happen. And as long as we’re uncertain … it’s tough.”

With respect to Justice Breyer, this decision shouldn’t be tough at all. State supreme courts, lower federal courts and supreme courts in other countries like Canada and the U.K. televise their public hearings with great success. It is well past time for our Supreme Court to do the same.

The lack of cameras at the Supreme Court is only one of many ways the justices hide their work from the American people. When deciding whether to recuse themselves from a given case (not participate because of a conflict of interest), the justices rarely explain their decisions or hold hearings to hear arguments on the motion to recuse. Last term, for example, Justice Samuel Alito first recused himself without any explanation from an important case concerning new live-streaming technology, and then reversed himself right before the oral arguments, again without any explanation. His initial reasons and his change of mind remain a mystery.

Justice Elena Kagan has recused herself from more than 100 cases, presumably because of her prior work as solicitor general, but without issuing a single written word explaining why. This silence became especially problematic when she refused to recuse herself in the challenge to the Affordable Care Act (despite a formal motion) after recusing herself in a huge Arizona immigration case and an important affirmative action case. The difference in her mind?  We have no idea.  Neither she nor any other justice is required to tell us.

And if Justice Kagan told her colleagues on the court why, perhaps by inter-chambers memorandum, we won’t get to see that explanation, either, even though every single pencil, piece of paper and computer at the Supreme Court is paid for by American taxpayers who, of course, must abide by the court’s decisions. Unlike the federal law governing the president’s papers, which deems those papers public property subject to record-keeping requirements, no rules dictate what happens to the official papers of the justices after they retire.

This lack of regulation has led to some inconsistent and perhaps questionable decisions: For example, now-retired  Justice David Souter unilaterally sealed his papers for 50 years; we still have not glimpsed former Chief Justice Warren Burger’s papers even though he retired when Reagan was president, there was still a moderate wing of the Republican Party, and the Religious Freedom Restoration Act (RFRA, now the subject of much Supreme Court controversy after Hobby Lobby) wasn’t even a twinkle in Orrin Hatch’s eyes.

Were we to see these papers, we might also have a better idea of how the justices agree to hear a case, any case.  As of now, in those rare circumstances when The Nine decide to take a case (only four have to agree), no one other than the justices and their clerks, not the public, not the attorneys, not even the parties to the case, have any idea which justices voted to hear the controversy. Which 80 cases out of the 7,000 or 8,000 requesting review are worthy of the court’s attention – that’s a big decision.  And yet the justices keep their decision-making secret, allowing no one (not even court staff) into the room where they meet and deliberate.

The result?  American people have no way to keep track of a particular justice's voting record on petitions for certiorari. Especially in cases where Justice Anthony Kennedy is likely the swing vote (he was in the majority in every 5-4 vote case the court decided last term), it would be helpful information to the parties, the public and the media to know if he was one of the four who wanted to hear the case. Yet, the court never officially reveals which justices voted to hear which cases.

There are indeed compelling reasons for the CIA to act with great secrecy.  Our national security may well depend upon it.  But our Supreme Court? Even though Lady Justice wears a blindfold, the justices should not force one on the American public.  Our belief and trust in the rule of law are simply too important for our justices to continue to insist on being as secretive as our spies.

Lisa McElroy is an associate professor of law at the Drexel University Thomas R. Kline School of Law, and with Eric Segall, co-author of "Supreme Secrecy," which will be published next year by Stanford University Press.