The dark side of Twitter: A digital-age tale of Brooklyn hipsters gone mad

Salon talks to Caroline Kepnes, a TV writer whose first novel charts a descent into insanity via internet stalking 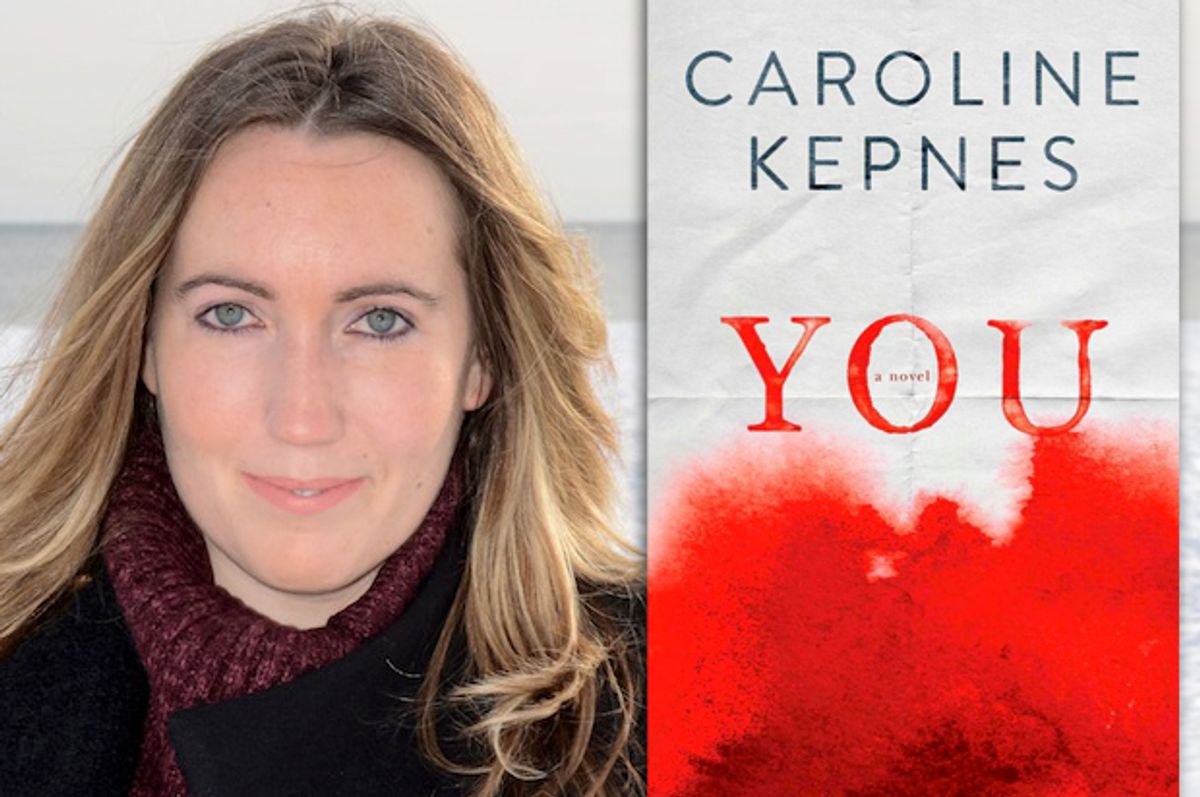 Caroline Kepnes’s debut novel, "You," isn’t even out yet, but it has already been compared to Bret Easton Ellis’ magnum opus "American Psycho" -- no small feat for a newbie novelist. The book is written from the mad-diary-like perspective of Joe, a charmingly oddball Brooklyn hipster who grows dangerously obsessed with a woman he meets at the bookstore where he works.

Joe’s a tech-savvy, equal-opportunity stalker, meticulously tracking his prey both in real time and online (throughout the book, he breaks into multiple characters’ social media accounts, regularly -- and convincingly -- posting as them). As his fixation escalates, so does the pace and intensity of Kepnes’s writing -- Joe’s fevered desperation drips from every page. And while his measures to hold on to Beck, the target of his obsession, become creepier and more violent, anyone who’s experienced unrequited (or under-requited) love might find themselves disturbed by their occasional pangs of sympathy for Joe.

Kepnes, a Cape Cod native now based in Los Angeles, has published many short stories, and, in a funny twist, worked as a staff writer on notoriously wholesome TV shows like "7th Heaven" and "The Secret Life of the American Teenager." In an extra dose of irony for such a macabre storyteller, Kepnes’s career began as an editor at Tiger Beat magazine (where, full disclosure: I worked with her at a sister publication).

Despite its debut status, "You" was was quickly snatched up and rushed to publication in a two-book deal with Atria/Emily Bestler Books, and it has a big publicity push behind it -- it’s sold foreign rights in 19 countries and is the kind of book that’s hard to imagine not being transformed into a high-powered Hollywood movie. In this interview, Kepnes discusses unlikeable characters, romantic obsession, and her longtime love affair with Lifetime movies.

"You" feels like such a scarily accurate portrayal of, as they say,"the way we live now."

One of my editors said it’s a thriller for the Twitter generation... [When I was writing it] I didn’t tweet a lot, but I was coming up with these tweets [from Joe’s perspective, who broke into various characters’ Twitter accounts and posted under their names] for the book, which was a whole new world for me. It was fun to compose tweets from someone else’s perspective and understand what other people are doing out there, exactly. It’s an interesting moment in [our] society to be a voyeur, what with everyone trying so hard to get attention.

What kind of reader did you imagine reading this book?

I am so elated when readers [say it’s] "unputdownable." Being swept into a book to the point that you can't do anything but read is one of the great rushes. All I knew was that when I was writing it I was really into it, and for me that’s the best sign. Like, “I’m so into this that I can’t sleep, and I keep waking up, and I’m so freaked out.”

How did the idea first come to you?

I was in L.A., feeling homesick for New York; I think everyone romanticizes New York when they don’t live there anymore. I wanted to revisit it. I had also just gone through a really hard time when I’d lost my father, my mom got sick, I got emergency foot surgery, and then I had vocal cord nodules and I couldn’t talk out loud ... I was in a dark place, so I wanted to create something good out of all these sick, dark thoughts in my head.

Joe’s character is so uniquely weird. Is he based on anything or anyone you know?

I love Joe for his humor, his tragic inability to deal with his emotions in a rational, law-abiding way. I think that's part of the fun of the book, vacillating between wishing you could go out with Joe and then realizing that's kind of like wishing you had a stalker. There is a fine line between love and control, and I like the romantic side of Joe.

I relate to his pet peeves. I love his disgust with people. I like his outlook on the world and I feel like he's also strangely naive in a way. He has watched too many movies, read too many books and he's so in his head that he can't engage in the world. There is something timeless about his loneliness to me, but I think it's particularly interesting to tell a story about someone disconnected when we, as an increasingly virtual society, are grappling with connectivity.

What about the female protagonist, Beck?

People tell me they see themselves in her -- she’s someone you despise but also relate to. That narcissism, the lying, and the way she’s trying so hard to invent herself. What a mess. We all know a version of this girl, right?

And then at the end of the day, I feel for her. She is so consumed with her image that she lacks a sense of self.
How did you feel about these two characters as you were writing them? They’re both pretty unlikeable, in different ways.

Beck is the worst, right? I wanted "the girl" to be someone who was hard to root for, someone whose idiosyncrasies are actually not adorable. She's getting stalked, she's in danger, but she's also annoying.

But I did feel enchanted with Joe and his struggle to get the girl. I related to the power of love for him, how it can be so much higher than logic. When you like someone, you like them, even if they’re very unlikeable.

Have you ever written anything this dark before?

What other pop culture works influenced you? Now is the perfect time for anyone who’s a fan of crime stuff...

I know, there’s so much -- you can watch people get killed, like, all the time! I’ve also always been a huge fan of Lifetime movies. One of the greatest things about Lifetime movies is how [a character] can be just plain crazy, but then at the end they’ll do a three-second flashback to explain, like, “this is why he’s crazy!” I adamantly didn’t want to have that one incident in Joe’s childhood to explain why he is the way he is.

Ever had your own case of romantic obsession?

I had a bit of a stalker when I was younger, but it was very different from this book and I never found out who it was.

The craziest thing I ever did, though, was tell somebody at a party that I was interviewing him when I wasn’t -- I just wanted to talk to him. I had a tape recorder with me and was like, “Well, you know...”

I feel like this book heightens your awareness of your interactions with the guy at the bookstore, at the coffee shop.

I loved the Richard Scarry books "What Do People Do All Day?". Sometimes I think of [You] as a dark, adult, revealing and disturbing answer to that question. Would you like anybody if you had full access to their life online? Also, when you finish reading, you should probably change your passwords, just because.