Bodyslamming for Jesus: Inside the bizarre world of Christian pro wrestling

"There’s no drug out there that will give you the high that getting addicted to Christ can be.” Uh, okay! 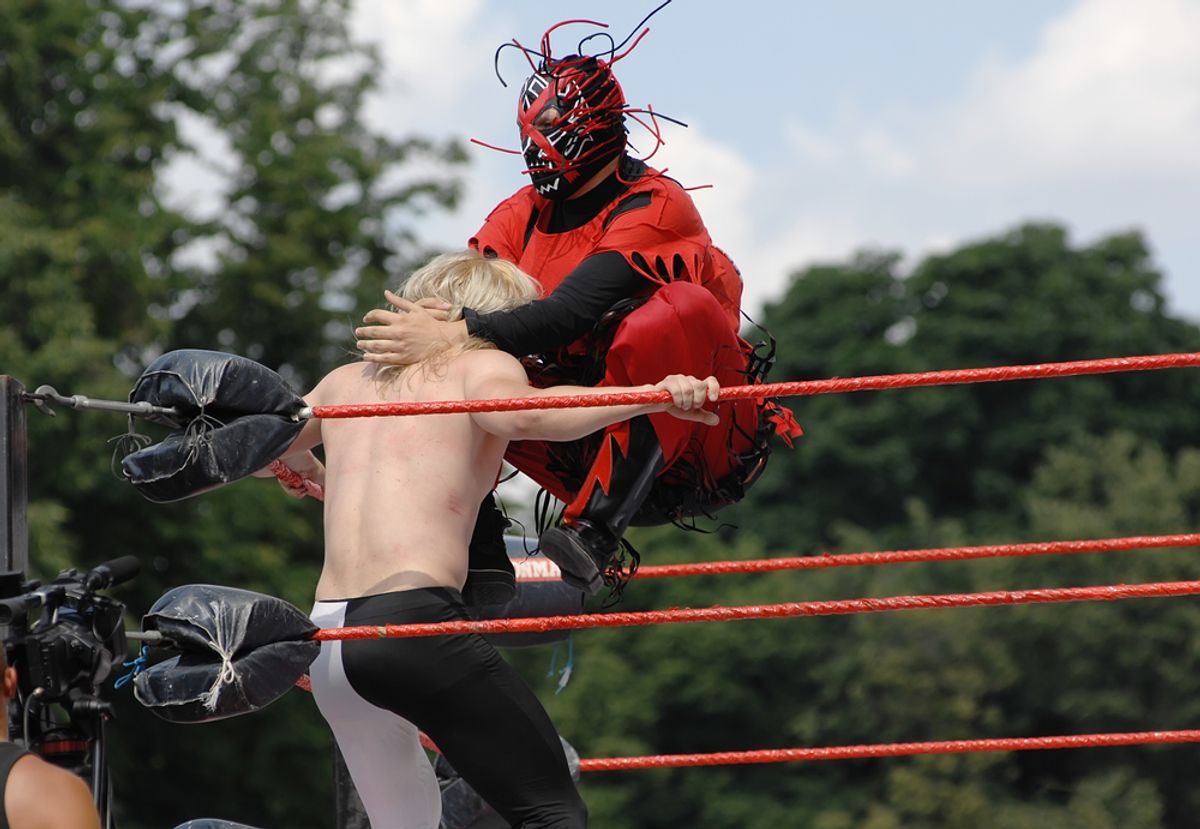 The Christian Wrestling Federation bodyslams for Jesus—literally. On the surface, the CWF looks like a normal WWE wrestling event, with costumed characters jumping from the ropes and wrestlers being hit in the back of the head with chairs. Sometimes there’s blood. Sometimes there’s an elbow to the thorax. Except, these violent wrestling moves are all done for the love of Jesus Christ and to save souls.

Welcome to the world of the Christian Wrestling Federation.

Like a “sleeper hold” from above, for the past 14 years, the Dallas-based religious grappling group has performed more than 600 events, in 34 states, and has seen over 25,000 people giving their lives to Christ,  while simultaneously enjoying the benefits and thrills of professional wrestling.

In the wrestling world, there are three categories: the Major Leagues (referred to as the Show), Outlaw Wrestling (untrained, fringe wrestlers who partake in spine-breaking, backyard wrestling), and the Independents, which CWF falls under. Being it’s Christian and wrestling, I note their sizes range from grapplers with big pot bellies to scrawny skinny kids who portray “heels” and “baby-faces” (fancy wrestling terms for bad and good guys); with such wrestling names as Angel, Shiloh, Colt Smith, Billionaire Todd, Poco Loco, and the subtle and clever, Jesus Freak. Yes, this is the perfect marriage of Christian and WWE-style wrestling that screams: “USA! USA! USA!”

In the non-ironic words of the Christian Wrestling Federation, their goal is, “To be a Christian outreach ministry that shares the love of Jesus Christ, through wrestling events around the world.”

Sure, giving someone the Guillotine Maneuver or Sleeper Hold in front of a crowd of screaming fans doesn’t seem very Christ-centric, but the CWD can explain. According to their website, “The Bible says we are to use unique and different ways to reach people for Christ. This is what the CWF is all about… reaching people in a unique way. With wrestling’s popularity at an all-time high, many people can be reached, and in turn, our goal is to convert them to Christ’s love. The focus of the CWF is to win souls for Christ. Our passion is seeing the lost become saved. The CWF is committed to anything we can do to honor Christ and the local church.”

“There were men in the Bible who dressed up in loincloths and ran through the marketplace all in the name of Christ, ‘Look at me! Look at me! I look crazy, I look freaky,’” explains Rob Adonis, a Christian wrestler who runs events in Georgia. “But now you’re listening to me so I’m going to give you some Jesus. Our philosophy is to get them in here. Do whatever you got to do and give them the truth. Give them the truth and the truth will set them free, you know, that’s our goal.”

Christian wrestling’s mission is to reach kids who don’t go to church but enjoy professional wrestling, so they will come to matches and meet Christ. Typically, at every wrestling show, 10% of the crowd will make a move to give their life to Christ. Sounds like a game of holy-roller smoke-and-mirrors, delivered with a mighty piledriver, where fans can take in their vision of a lovable Jesus opening a big can of whoop-ass.

Checking out Christian wrestling videos on YouTube, it’s the ultimate battle of good vs. evil (in terms of the ongoing clash with Satan). Southern wrestling alone is weird. Throwing in the element of Jesus brings it to a whole new surreal level. A girthy wrestler flies off the ropes and delivers a crushing Hangman’s Neckbreaker to his unfortunate opponent. THUD! Like a plague of locust, or a fatal kiss from Judas, the champ then falls victim to the best finishing move in wrestling—the Guillotine. Adding insult to injury, the hero is handcuffed to the ropes by a pair of rogue thugs then stomped, chocked, and kicked. Clearly, this wrestler is getting crucified. Moments later it gets gravely serious.

“Hold on, we got a little more,” says announcer.

The hero points to the handcuff still locked around his wrist; “As I’m looking at this chain wrapped around my wrist, handcuffed, as I was handcuffed to this, I’m reminded of a message I want to share with you: the only purpose we are here is to serve God!”

This is tying together neatly here.

“Are you living a life right now that’s got you shackled in chains?” he asks, ring-center. “There’s only one addiction out there and that’s the addiction to Christ!”

Clearly moved, the wrestling crowd is once again on their feet. They’re hooting, applauding, some with fists in the air. This time, it’s not because of a well-executed double-elbow-drop; no, it’s because of Jesus.

Typically after the main event, kids are led to a room. Trained counselors have them bow their heads and they are told to give their lives to Jesus Christ. Everyone is encouraged to bring friends to the next wrestling match, especially those who might not have the faith (won’t they be surprised) in this game of religious switch-a-roo.

Rob Adonis says there are always chairs flying at their Christian wrestling events: “I’ve had my nose busted open a couple of times from some miscues or hit the ropes wrong or some chair come in and pop you in the face. We try to avoid the blood. It happens on accident, yeah.”

The reaction from the crowd over the gore is going completely Christian apeshit. Yes, this is real Christian blood, perhaps ingenuously preplanned to symbolize Jesus’ blood on the cross. Obviously, in the world of Christian wrestling, it’s the blood of Christ washing away the sins, while getting the shit kicked out of him. No crown of thorns needed in these wrestling circles. But blood during matches is not recommended because it’s not too sanitary and it mars the wrestling mats. Amen.