GOP's "I don't know" doctrine: How Thom Tillis and co. will attack Obama on ISIS

Republicans hate "leading from behind." So instead they're pushing a foreign policy of "I'm not sure, but trust me" 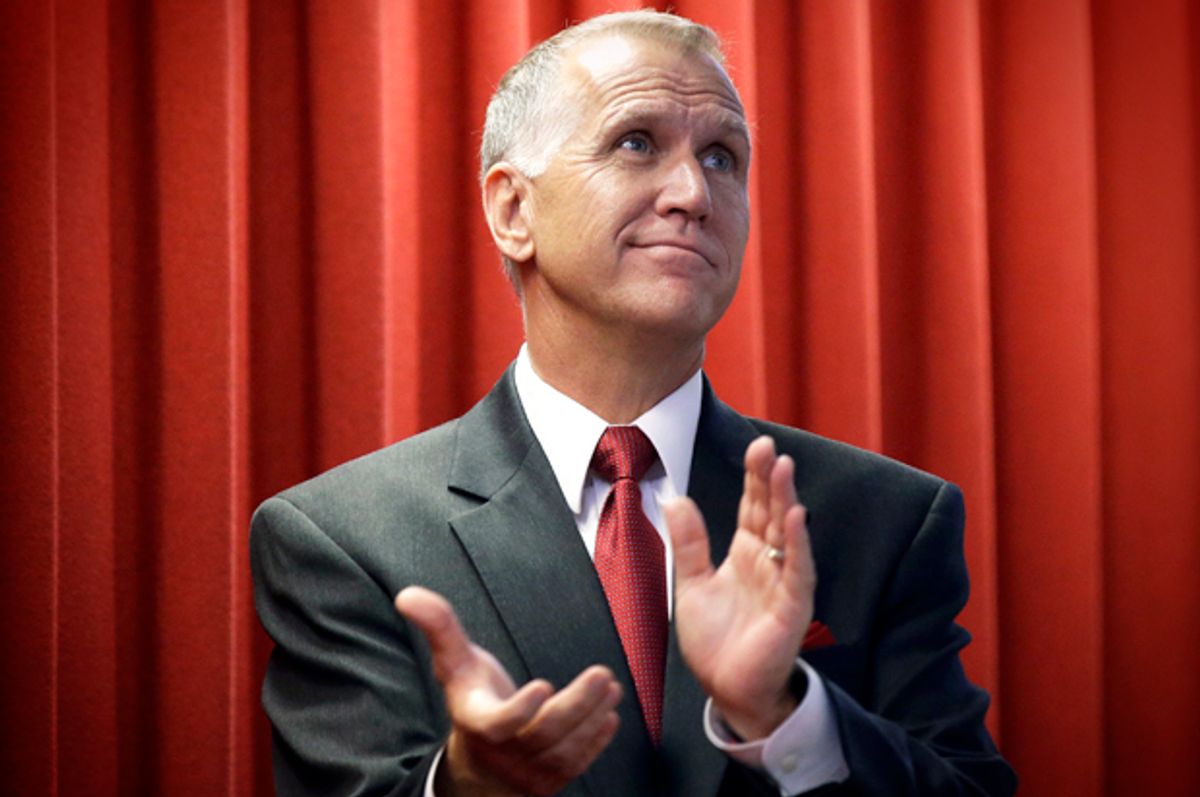 As airstrikes on ISIS continue and foreign policy issues keep grabbing headlines, more and more Republican candidates are shifting focus to national security and doing their level best to scare the life out of would-be voters. In New Hampshire, Scott Brown is warning that without his bold leadership, ISIS could “cause the collapse of our country.” The National Republican Campaign Committee is warning the Democratic weakness is putting your life “at risk.” And now here comes North Carolina Senate candidate Thom Tillis with a new ad taking aim at Democratic incumbent Kay Hagan (and Barack Obama, of course) on terrorism.

Their policies are putting you in DANGER which was made clear by plastering the word DANGER in eleventy-thousand-point font across your TV screen.

The criticism of Kay Hagan for skipping committee hearings is a gimme, and a little cheap. Scott Brown actually did a solid over the weekend for his Democratic opponent, Jeanne Shaheen, by explaining that senators have hectic schedules and serve on multiple committees that often double-book hearings. Bottom line: If Thom Tillis becomes a senator, he’ll be skipping a ton of committee hearings, too.

But whatever. We’re here to talk about terrorism and the strategies Republicans and Democrats would bring to bear to fight it. Tillis, before releasing the terrorism ad, filmed the GOP’s weekly video address and attacked the president for “leading from behind with a failed foreign policy that has weakened America.” He helpfully listed the president’s “failures,” one of which was that “the president still doesn’t have a strategy to destroy the terrorist group known as the Islamic State.”

The administration doesn’t have a strategy for taking on ISIS? Well… no. They do have a strategy. Obama even gave a big speech on it. He said in that speech: “This is our strategy.” It involves airstrikes and arming rebel factions in Syria and pulling regional allies together into an anti-ISIS coalition. Tillis even released a statement saying he backs airstrikes on ISIS targets in Syria – a key part of the strategy he says doesn’t exist. You could argue that their strategy is muddled and insufficiently clear on how it will realize its ultimate objective of “destroying” the terrorist group, but it is a strategy.

The obvious question that arises when a candidate criticizes his opponent for doing the wrong thing on a given issue is “okay, well, what do you propose?” Tillis won’t answer that question. He’s actively avoiding taking positions on ISIS, while warning that the positions of his Democratic opponents are dangerous for his state.

This puts him in an awkward position, since certain aspects of the White House’s ISIS strategy have drawn bipartisan support in the legislative body to which he aspires. Language authorizing the arming and training of Syrian rebels was included in the continuing resolution to fund the government that passed earlier this month. Kay Hagan voted in favor of the CR, as did Sen. Lindsey Graham of South Carolina, who campaigned with Tillis last week. On the trail, Tillis was asked if he, like Graham, supported giving weapons and training to the Syrian forces fighting Bashar al-Assad and ISIS. Tillis’ response, per the Charlotte Observer, was “I actually don’t know.”

“I actually don’t know if we should or shouldn’t,” Tillis said this week. “I would have to know that these arms would not get in the hands of people who would want to take over the Middle East.”

Asked about the differences, Tillis said, “it’s not a matter of disagreement.”

“It’s a matter of having an independent thought, something that Sen. Hagan hasn’t had 96 percent of the time. ... Based on the information I have today, we don’t have a disagreement; we’re just at different places in the decision process.”

And now you see the problems start to emerge. How can Obama’s (and Hagan’s) policy be dangerous and irresponsible when Tillis himself backs one portion of Obama’s strategy and isn’t sure on another? And it’s a tough sell to whack your opponent as an Obama toady when you yourself might be open to the strategy item you’re discussing and you’re campaigning with a Republican who backs the policy.

Graham’s campaigning on behalf of Tillis also led to questions of using U.S. ground troops to combat ISIS. The administration has ruled it out, but Lindsey Graham argues it’s necessary to send American forces into battle again. Tillis, asked if he shares Graham’s stance on the issue, punted:

When asked if he agreed with Graham that U.S. troops will have to be used, Tillis said he didn't have enough information to make a decision.

Tillis said Graham has had "briefings that I haven't had access to. He's arrived at his conclusions as a result of those briefings ... When I have the opportunity to be briefed at that level, then I'll make a decision based on the information."

In certain respect, Tillis is right – these are very difficult questions that require careful deliberation and considered debate. But he’s attacking his opponent for being insufficiently proactive in the face of an emerging threat and for pursuing policies that he thinks are wrong and dangerous. And his answer to what he’d do differently, beyond rote platitudes about leadership, is “I don’t know.” He’s arguing that new policies are needed to reduce the DANGER to Americans, but he can’t articulate what those policies are, he says, until he’s actually elected.

Basically, his answer to “leading from behind” is “I’m not sure, but trust me.”