Clinton at McDonald's might be best "SNL" presidential parody ever. Here's the story, and Clinton's scary reaction 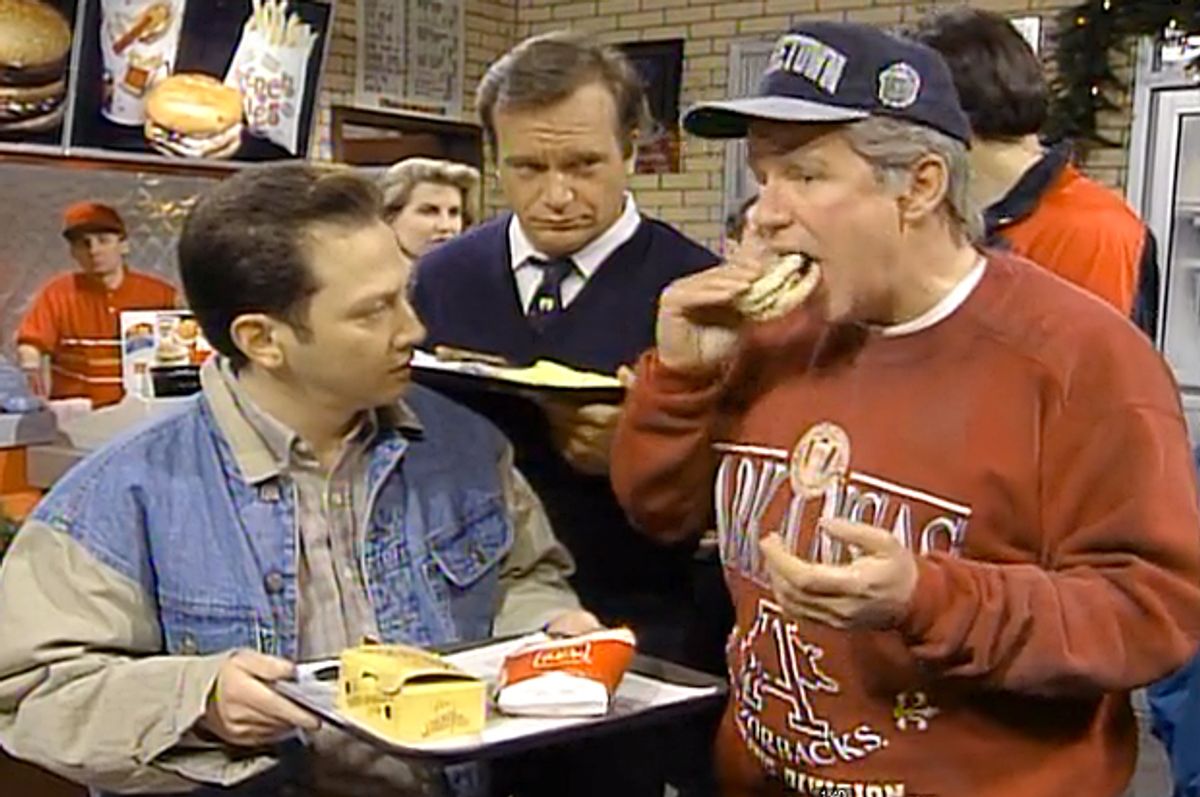 Excerpted from “You Might Remember Me: The Life and Times of Phil Hartman”

As the 1992 election drew nearer Phil Hartman’s Bill Clinton impersonations became more frequent as more political sketches got airtime. On Sunday, November 1, Phil and Carvey hosted a politically themed clip show titled “Presidential Bash.” Besides Clinton, Phil also portrayed the vice presidential debate- bungling Admiral James “Who am I? Why am I here?” Stockdale, out on a joyride with Ross Perot (Dana Carvey). It had originally aired a week before, and afterward calls had flooded into SNL from military vets who thought the sketch disrespectful. "SNL" writer Robert Smigel says Phil never seemed reluctant to play the part, but that he later expressed some guilt about mocking the former Vietnam prisoner of war and subsequent Congressional Medal of Honor recipient.

Two days later, on November 3, when the silver-tongued Democrat from Arkansas— already nicknamed “Slick Willie”— beat out Republican incumbent George H. W. Bush for the most powerful post on Earth, Carvey’s prediction came true: Phil won, too. “Phil was incredibly excited that he was going to get to be the president,” Smigel says. “In a way that you wouldn’t expect, because he was so laid-back. He’d seen Dana be George Bush and how important that was to Dana’s career.” Phil even wrote a personal letter to President- elect Clinton, Smigel says, “trying to be very serious and thoughtful” about his new responsibility. “In the overall scheme of his life,” Phil said, “we’re either a thorn in his side or a finger tickling his ribs.” In the overall scheme of Phil’s life, Clinton’s installation as leader of the free world was a game changer.

“I don’t think we’ll be particularly vicious at first,” Phil told The Boston Globe in late November, a few weeks after Clinton’s election, of the “choice gig” that was now his for at least the next four years. “When Bush took office, we gave him one hundred days to establish a persona. Dana Carvey’s take on Bush evolved from Bush’s quirky traits—‘It’s bad! It’s baad’ and the manic hand gestures. So far Bill hasn’t given me any broad hook.”

Eleven days after America voted the real guy into office, a torch of sorts was passed in a so-called “cold open” (prior to SNL’s opening credits) that featured Carvey as a vanquished George Bush calling up campaign contributors to apologize for letting them down.

Bush’s assistant, Marybeth: Sir, I almost forgot: it’s 11:30, and President-elect Clinton is about to go on CNN.

Announcer: Ladies and gentlemen: the President-elect of the United States. [Shot dissolves to a grinning Clinton]

Then came December 5, 1992. Until then, Phil’s most successful Clinton portrayal to date had been pre-election, when he played the then-governor bragging about Arkansas’ dismally low literacy rate. This was not that—by a long shot.

Clinton: All right, boys, let’s stop here for a second. I’m a little parched from the jog.

Secret Service Agent #1: Sir, we’ve only been jogging for three blocks. Besides, Mrs. Clinton asked us not to let you in any more fast food places.

Clinton: I just want to mingle with the American people, talk with some real folks. And maybe get a Diet Coke—or something.

Clinton: Jim, let me tell you something. There’s gonna be a lot of things we don’t tell Mrs. Clinton about. Fast food is the least of our worries.

So begins the most memorable Clinton sketch of Phil’s SNL tenure and arguably the show’s history. Stopping by a McDonald’s to chat with real people about real issues, Phil’s cartoonishly bubble- assed president-elect—wearing a University of Arkansas sweatshirt, a Georgetown baseball cap, and his usual sex-you-up expression— snarfs down portions of an Egg McMuffin, a McLean sandwich, a McDLT, a Chicken McNugget, french fries, a Filet ’O Fish, a hot apple pie, a soda, a milk shake, and a young boy’s discarded pickles while discussing loans for small businesses and college students and holding forth on the nefarious doings of Somali warlords. In the process, he nearly chokes and is saved by a sip of soda from sketch participant Rob Schneider.

“Phil Hartman was another one of the go-to guys,” Schneider has said. “He was such a good character actor that he would get lost in something and didn’t really pop as hard in movies as, like, Adam Sandler or some of the other guys or Eddie Murphy because he was just great as characters. People just saw him as that character. But he was a guy you could depend on to do anything. And . . . he never fluffed. You never saw him stumble his words or not be able to get it out or not go for it.” Even on the verge of real-life choking in a make-believe scenario, Phil “never cracked.”

Largely as a result of Phil’s utter commitment, the sketch killed. Not only that, after six years of mostly blending in, he finally stood out—in a big way. “I became a recognizable face and somewhat of a household name,” he said in explaining the Clinton Effect, “and the whole nature of show business changed. I didn’t have to go out and look for work anymore. Work came to me.”

Carvey to Phil, 1993: You are Clinton. That’s why when people go, “Are you going to try and do Clinton?” I go, “Well, the guy already is Clinton.” He does him perfectly, so what is the point?

Clinton had been difficult to nail at first, Phil admitted to The Washington Post, “because he really fits the mold of the polished pol—he’s very studied.” So, too, was Phil—watching tapes of Clinton’s debates and other appearances, making “little drawings of his hand gestures” and perfecting his subject’s unique speech patterns until they felt right in the throat. “I’m loath to take credit for it,” he told the Toronto Star, referring to his voice-manipulating abilities, “because I don’t even know what it is. It’s some kind of intellectual facility that just allows you to hear something and realize what muscles in your throat to tweak, where you have to pitch it.” In Clinton’s case, Phil seized on his allergies, which caused post- nasal drip and gave his voice a slight scratchiness.

Costume-wise, owing to his self-described “Mr. Potato Head” quality and the fact that he and Clinton shared similar facial features, Phil took a minimalistic approach that required little more than a suit, a lush silvery wig, and some basic makeup that highlighted the tip of his nose and lightened his eyebrows. Clinton’s hand gestures were essential, too. “Clinton has beautiful hands [and] long fingers,” Phil said in explaining his Clinton approach for the umpteenth time. “He uses the old stock political gesture, what I call the ATM card in the ATM machine. It’s less intimidating than a fist or a finger point. It’s almost like he’s handing you something . . . . When all these elements coalesce, you can create the illusion of this personality.” While his pal Carvey did caricatures, and did them well, Phil was more concerned with realism— getting so close, he once said, “that it allows the audience to suspend disbelief.”

Norman Bryn, whose makeup handiwork helped Phil become Bill for a couple of seasons at SNL, calls Phil “an ideal Clinton. He was getting a wig made for himself and he was going to pick up a lot of what he called ‘quick extra money’ doing what Dana was doing [with Bush].” At the time, Carvey commanded a healthy fee in the tens of thousands to perform his Bush shtick. Phil hoped to clean up, too, earning extra dough at Clinton’s expense.

But while his portrayal of Clinton was often less than flattering, Phil insisted he wasn’t out to get the guy. On the contrary, Phil liked him and felt they were in some ways kindred spirits. “He opposed the Vietnam War like I did,” Phil told USA Today. “He tried marijuana. He didn’t inhale. I did.” The kindred thing wasn’t exactly mutual. During Phil’s 1993 appearance on CNN’s Larry King Live, he once said, the show’s producers tried and failed to have Clinton call in. Instead, Bubba sent over a signed photo with the inscription, “To Phil Hartman—You’re not the president, but you play one on TV and you’re OK—mostly.” The word “mostly” was underscored with a squiggly line, which Phil interpreted to mean, You’re all right, but I definitely have my eye on you, because you cross the line. Later on, in fact, Phil claimed he was shut out of White House events and other functions as a direct result of his Clinton skewering.

After meeting Clinton at a New York fund-raiser, Phil told David Letterman, “I found out the hard way that he really doesn’t like what I do.” The overseas crowd apparently was skittish, too. After being invited to perform for Queen Elizabeth, Prince Philip, and other fancy- pants figures at the annual Royal Variety Performance in London, Phil claimed the prime minister’s office “got concerned” due to [here, Phil affected a stodgy accent] “ ‘a longstanding relationship with the United States. We certainly don’t want to jeopardize our relationship.’ And so they called the White House and [the White House] went, ‘No! Not Hartman! No! No!’ So they put the kibosh on it and it was very disappointing.”

Curiously, Phil told another interviewer that the president had proclaimed to “get a kick out of what we did on SNL.” He also revealed that Clinton and his staffers had supposedly watched tapes of Phil’s impersonations during the 1992 presidential campaign. Then again, the most pointed barbs flew only after Clinton took office. In any case, it wasn’t Phil’s job “to be the president’s best friend,” he confided to NBC host Bob Costas—though he still felt “a twinge of guilt” about doing his impression. He also told Costas this, half- jokingly or not, of his comedic targets: “I think deep down you want to kill the person, at least in my case.”

But at least Clinton let Phil know where he stood. Other celebrities Phil played weren’t so forthcoming, and it bothered him to know they might be off ended. Whenever Carvey channeled radio personality Casey Kasem, Phil said by way of example, Kasem sent a thank-you gift. Phil got squat from the folks he lampooned. More disturbingly, he also received some “really scary militia kind of stuff” from dismayed viewers. As Phil was well aware, his Clinton jabbing tended to be more personal than political owing to Phil’s own liberal leanings. Instead of mocking Clinton’s stances on education or taxation, for example, Phil focused on his overeating or his lady killing.

Mike Thomas is a longtime arts and entertainment staff writer for the Chicago Sun-Times and author of the critically acclaimed oral history The Second City Unscripted: Revolution and Revelation at the World-Famous Comedy Theater.