Rand Paul won't like this: Ron Paul weighs in on secessionist movements in the U.S.

As the senator tries to distance himself from his inflammatory father, Ron Paul refuses to go quietly 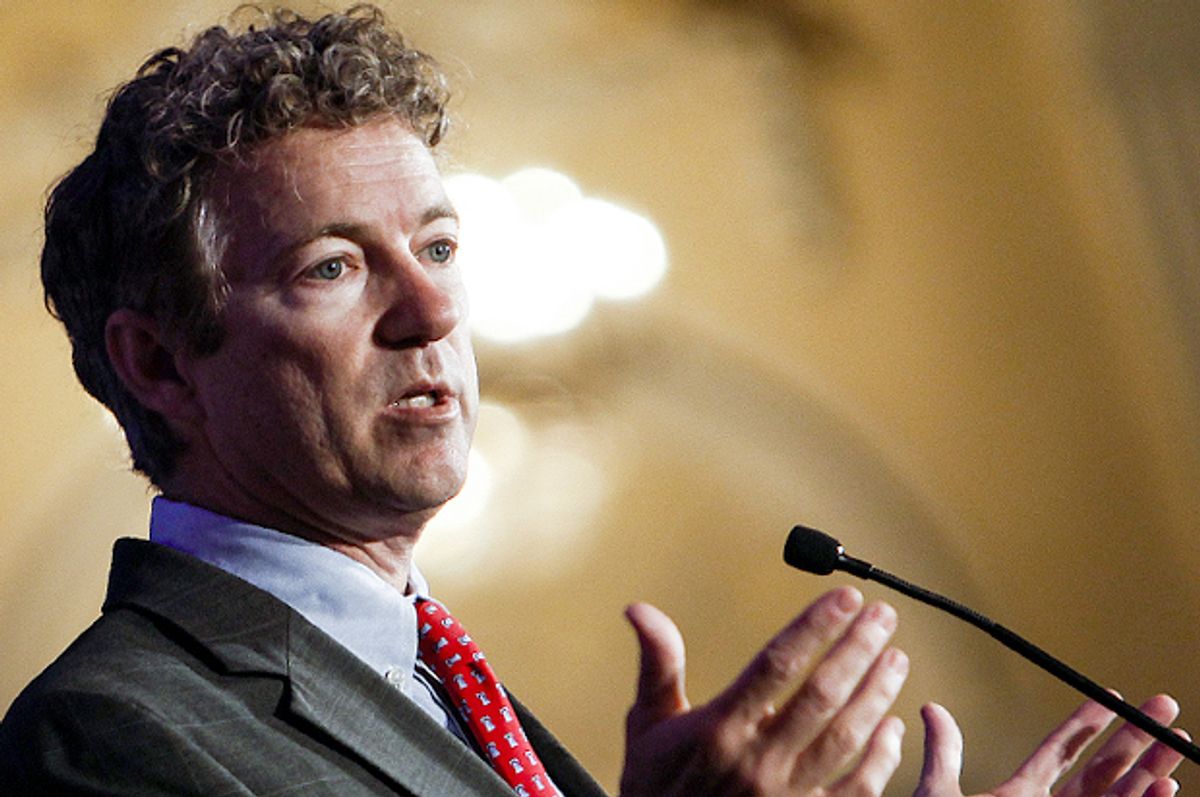 As he moves toward a 2016 bid for the Republican presidential nomination, Kentucky Sen. Rand Paul is working overtime to win over GOP factions skeptical of the conservative libertarian brand embodied by Paul and his father, former Texas congressman and presidential candidate Ron Paul.

Though Rand Paul got his start in electoral politics working on his father’s campaigns, the success of his likely presidential campaign depends on distancing himself from Ron Paul’s more strident rhetoric regarding U.S. economic policy and foreign intervention, and from the elder Paul’s extensive history of bigoted and racist commentary.

In a lengthy profile of the Kentuckian for the forthcoming issue of the New Yorker, Ryan Lizza offers a glimpse at the nascent Paul campaign’s early efforts to create space between father and son ahead of the 2016. An aide to the senator expressed exasperation that “the old man is still out there speaking his mind” after Ron Paul released a statement supporting Russian President Vladimir Putin shortly after the Russian-backed rebels showed down a Malaysian airliner over Ukraine. Rand Paul, commenting on his family’s ties to far-right and white supremacist figures, told Lizza that he “was never associated with any of these people. Ever. Only through being related to my dad, who had association with them.” (Not quite.)

Paul’s claim might not withstand scrutiny, but this much is clear: his efforts to keep his father from becoming a problem are unlikely to succeed if Ron Paul continues to voice inflammatory views. And Ron Paul’s latest essay makes clear he has no intention of fading quietly into the night.

Hailing the September 18 independence referendum in Scotland – in which voters rejected a split from the United Kingdom – Paul said the referendum “should cheer supporters of the numerous secession movements springing up around the globe” despite its failure. Paul left little doubt that he counts himself among their ranks.

“Americans who embrace secession are acting in a grand American tradition,” Paul writes. “The Declaration of Independence was written to justify secession from Britain. Supporters of liberty should cheer the growth in support for secession, as it is the ultimate rejection of centralized government and the ideologies of Keynesianism, welfarism, and militarism.”

Paul doesn’t endorse secession as an outcome so much as a useful form of blackmail.

“The possibility that people will break away from an oppressive government is one of the most effective checks on the growth of government,” he posits, proceeding to state that the threat of secession will make it easier to achieve the “[d]evolution of power to smaller levels of government.”

In a subsequent interview with National Journal, Paul pronounced himself “real pleased” with secessionist movements in the U.S. His only lament is that there aren’t more.

“[O]n second thought, you think, 'Why not? Why not more?’” Paul wondered to National Journal’s Rebecca Nelson.

An excellent question for, say, a GOP primary debate in 2016.