American corporate law is broken, ruining our democracy -- and worse than you thought, a leading author tells Salon 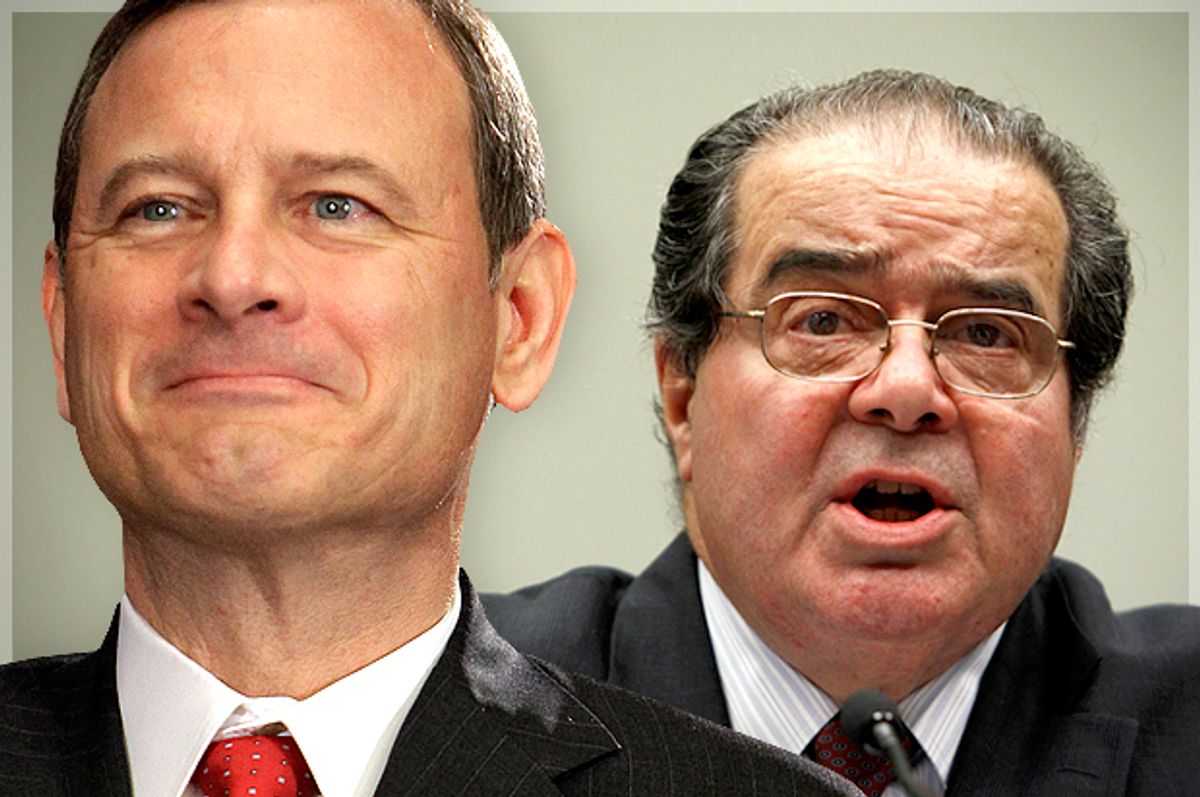 In a recent interview with the New Republic, Supreme Court Justice Ruth Bader Ginsburg, who is often considered the most powerful and influential liberal legal theorist in American politics today, was asked which recent Supreme Court decision she'd choose to overturn if she could overturn only one. Her answer was unequivocal: "If there was one decision I would overrule, it would be Citizens United. I think the notion that we have all the democracy that money can buy strays so far from what our democracy is supposed to be."

As anyone who's been paying attention to the liberal activist class over the past few years knows well, Ginsburg's concern over how the 2010 decision has changed — and will continue to change — U.S. politics is not hers alone. But while the belief that the wealthy have too much influence over American politics is widespread, and even agreed to by a majority of Republicans, many of the historical and intellectual roots of the Citizens United decision are less understood. Yes, we know Mitt Romney stepped in it when he told a "friend" that corporations are people; but where does that idea, which sounds so absurd and is yet so influential, even come from?

That's the subject of former Massachusetts Assistant Attorney General Jeff Clements' recently released book, "Corporations Are Not People: Reclaiming Democracy from Big Money and Global Corporations," which is a revised and updated version of his 2010 effort. Salon recently spoke with Clements over the phone to discuss the history of corporate personhood, the infamous Powell Memo and the future of campaign finance reform. Our conversation is below and has been edited for clarity and length.

So to start from the beginning, where does the idea of corporate personhood come from?

It’s an interesting and long and can be complicated story ... In the 1886 somewhat famous case of Santa Clara v. Southern Pacific Railroad when big corporations, such as the railroad and others, were challenging state and federal regulations ... that was when the court sort of first took what I think is rightly viewed as a disastrous error that wasn’t really overturned until a new court, after the Great Depression.

And then it kind of went away for a long time, until what is really the story of my book: the story of Lewis Powell and the Chamber of Commerce’s revival of corporate constitutional rights, beginning in the late 1970s.

Can you tell me a bit more about the Santa Clara case, for those who don't know? It's a pretty amazing story.

Yeah, it really is. It was Santa Clara county, California, and in the early 1880s the railroads were increasingly powerful, increasingly getting both influence and benefits from the government, in part for good reason (to build a national railway) and in part for good old-fashioned greed. And so they’re pushing track all over the country, and counties and states were beginning to do things like tax those or make rules about safety — and other things with railroads, which were a new technology at the time.

So the Southern Pacific Railroad, one of the big powerful ones, challenged Santa Clara county’s right to tax the railroad, claiming that because it was taxing the railroad corporation, but not other people the same way, it was a violation of the Equal Protection Clause and the Due Process Clause ... But the railroad sort of hijacked that with a creative argument that should have been laughed out of court, but wasn’t.

Now there’s sort of a back story: In the Santa Clara case itself, the Supreme Court actually didn’t reach that constitutional question. There’s various stories on why the court reporter wrote in a headnote that claimed to be a summary of the case that the court believes that corporations are persons under the Due Process Clause ... but for one reason or another, it ended up being put into a summary of the case that that’s what the court had decided, and the court kind of ran with that and corporations ran with that, and it became sort of a rubber stamp for corporate rights claims...

Yeah, and it's the part about that court reporter that really blows my mind — that someone with so little official power had such great influence.

And footnote: The reporter had been a railroad corporation president at one time.

What a coincidence! Anyway, is corporate personhood — or at least the idea that corporations have specific rights — something that has roots going back to the founding era? Because conservatives who defend Citizens United and other decisions like it often argue (sometimes via implication) that they've got American history on their side.

It absolutely does not have roots from that era; there’s no such thing as corporate rights in the Constitution. The founders and the framers of the Constitution, the founding generation of Americans that set up this great experiment in self-government by free and equal people, would be appalled by the idea that corporate entities could claim constitutional rights. That is reflected in the founders’ writings,  including those of James Madison — and Thomas Jefferson, who said he hoped to crush in its birth the growing aristocracy of moneyed corporations.

But it’s also reflected in the basic American principle; the Constitution opens “We the people,” and there’s a reason for that. The whole notion of what we’re about is that we have rights because we’re human beings. It goes back to the Declaration of Independence that we take it as self-evident that all people are created equal; these are human rights that the Constitution is built on. It’s a terrible, dangerous mistake to look at this as somehow conservative or traditional, that corporations have rights.

To fast-forward to the modern era, then, can you tell me a bit about the infamous Powell Memo and why you think it's so important?

It’s significant mainly because it ended up being not only a blueprint for where we ended up with Citizens United and the creation of an activist-minded Supreme Court, as Lewis Powell described in the memo, but also because it actually was executed and we’re living with [the consequences].

Lewis Powell was a corporate lawyer in Richmond, Virginia, who privately outlined a game plan for the U.S. Chamber of Commerce in which he looked around, and in his view — this is 1971 — sees threats (citing people like Ralph Nader) to what he called the "free-enterprise system." Remember: In 1971 we had Earth Day and the creation in the Nixon administration of the Environmental Protection Agency, the Clean Water Act, the Clean Air Act; we had worker safety, we had democracy working pretty well. We even had a constitutional amendment lowering the voting age to 18.

This all was a great worry to Lewis Powell, and he outlined for the Chamber of Commerce a call for the Chamber and other large corporate allies to fund — with massive amounts  — a long-term effort [on behalf of corporate power]. ... Strikingly, Powell looked at the judiciary and said in this memo, in his words,  that “especially with an activist-minded Supreme Court the judiciary might be the most important instrument for social, economic and political change.

Ultimately, Lewis Powell is nominated to the Supreme Court, goes on to the Supreme Court, and the memo’s not disclosed. We have a Judiciary Committee hearing where in all the background materials nobody knew that Powell had called for an activist-minded court, had advised the Chamber of Commerce and corporations to execute this game plan.

And then Lewis Powell, once on the court, writes four decisions in the space of about eight or nine years that create a powerful corporate speech rights theory.

So to play devil's advocate, what would you say to those who think this all sounds a touch too conspiratorial?

I don't want to sound like I'm spinning conspiracy theories, so that's why I'm careful to quote the memo itself and to show how it played out. In some sense, it doesn't matter that much, because obviously Powell couldn't do this alone — and I'm sure he would argue, and he does in the memo, that this was necessary and good [for the country] — but it was flat-out an argument for organized corporate political power, and using the courts. ... This thing didn't happen in secret. We've all been able to witness this, if we were reading the cases, and as a lawyer I've seen it.

Looking to the future — because your book is about campaign finance reform as well as corporate personhood — I'd like to hear your thoughts about how reformers should approach their goal. There's been some criticism lately of the more traditional form of campaign finance regulation in the U.S., which is restrictionist, meaning it's focused on keeping money out of the system rather than increasing the number of people who put money into it. Are you someone who thinks the restrictionist approach is mistaken?

I don't agree at all. I don't think there's one silver bullet, but I think clearly some limitations on the money that comes into the system is important, not because the money is a lot, but because the amount of money comes from so few people — corporations or, in some cases, unions. ... Money isn't speech in this context, it's power — and concentrated power is always a threat to a republic like ours. I don't see why we need to take [restrictions] off the table. This is a big, complicated problem. ... It won't be the only thing, but I think it's part of a package solution.

Does that package solution absolutely require a Constitutional Amendment to overturn Citizens United? It's a mighty big task, amending the Constitution; is there no other way to solve the problem without it?

So the court decision got it wrong. They had a chance to fix it when Montana brought a case to the Supreme Court saying Citizens United did not limit Montana's ability to keep corporate money out of elections and valid initiatives as it had for 100 years. But the Supreme Court decided again and again to decline to reconsider the case. So the only remedy left is a constitutional amendment at this stage.

OK, so what would be your overarching strategy for the campaign finance reform movement? An amendment and then ...?

To make American democracy work again, we need to come together as a country to do three things:

First, restore the First Amendment and the Constitution for we the people by reversing Citizens United, and reclaiming our fundamental rights to an equal voice and participation in self-government. We need to push both the amendment and work in the courts to do this, and there’s a lot of progress and a lot to do in both areas.

Second, clean the swamp of systemically corrupted elections and government with reformed campaign finance, clean election and lobbying laws.  We need disclosure and transparency, small-donor/citizen-funded elections, separation of lobbying from fundraising, and revolving door and ethics reform, among others. Some of this will require that we succeed in the constitutional work, but there’s a lot that we can demand and push for at the same time as we reclaim our constitutional rights to participate in elections and government on an equal basis.