"We're not going to listen to empty promises": Denver students show the power of civil disobedience 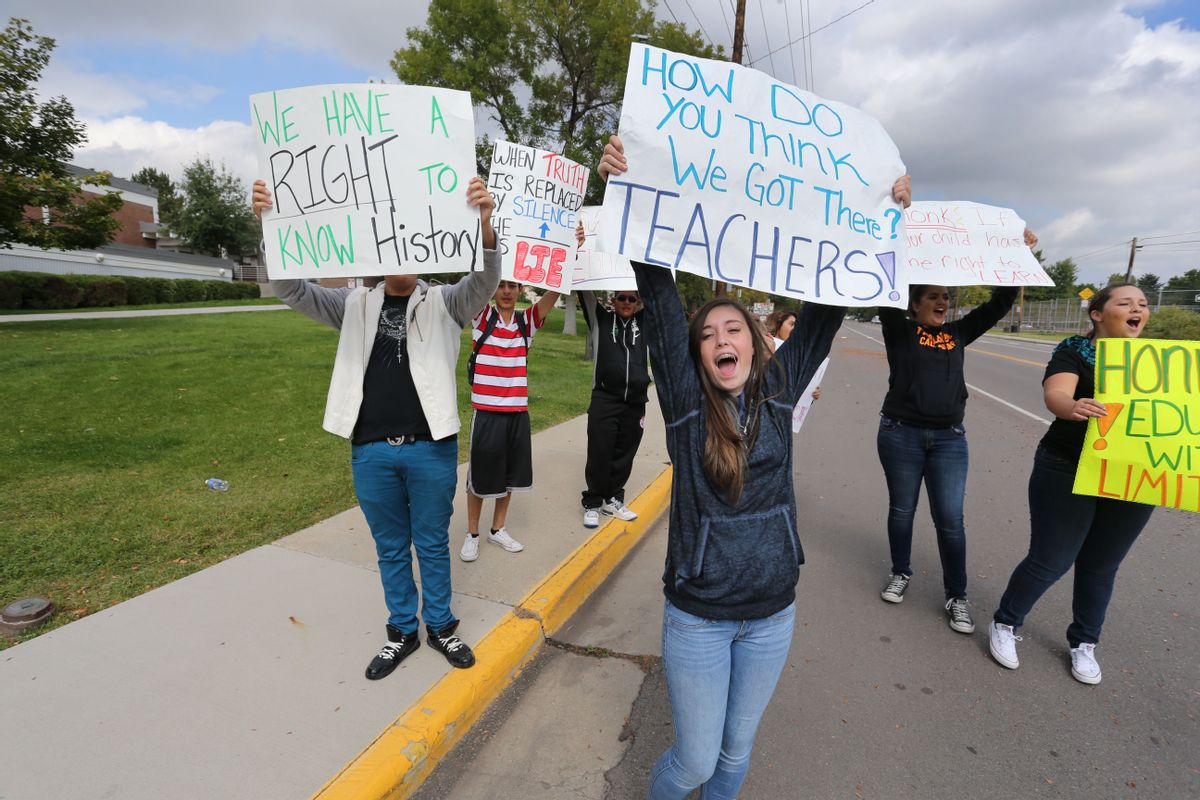 Students protest against a Jefferson County School Board proposal to emphasize patriotism and downplay civil unrest in the teaching of U.S. history, in front of their school, Jefferson High, in the Denver suburb of Edgewater, Monday, Sept. 29, 2014. The Jefferson County School District says classes had to be canceled at Golden and Jefferson high schools on Monday because so many teachers called in sick. (AP/Brennan Linsley)
--

On Monday, two Jefferson County, Denver, high schools were shut down due to the vast majority of teachers calling in sick. According to the Denver Post, 52 of 65 teachers at Golden called in sick after 8 p.m. on Sunday, while 27 of 37 teachers at Jefferson were absent as well.

Superintendent Dan McMinimee threatened disciplinary action, noting that they would dock teachers a day's pay, while school board president Ken Witt expressed disapproval: "I'm very disappointed that some of our instructors have chosen not to turn up for work today. It is not appropriate for adult matters to impact the education of our students."

The closings follow a number of protests by both faculty and students who object to two changes recently proposed by their county's school board. Witt is referring to the first, a pay-grade system linking teacher salaries to performance reviews, which has already been enacted. The second (casually ignored by the board president) seeks to alter the AP U.S. History curriculum.

The history proposal reads: "Materials should promote citizenship, patriotism, essentials, and benefits of the free enterprise system, respect for authority, and respect for individual rights. Materials should not encourage or condone civil disorder, social strife, or disregard of the law. Instructional materials should present positive aspects of the United States and its heritage."

Ironically, the proposal itself has inspired a great deal of civil disorder. While this evolved into a student-led protest last week, the momentum began building a week beforehand, when 50 district teachers held a “sickout" that forced the closure of two district schools. Then, last Monday, 100 students from Evergreen High School staged a walkout, which inspired kids from other schools to follow suit the next day. By midweek, around 700 students filled the sidewalks outside Jefferson County's Chatfield High School....

Following the initial uproar on Tuesday, the board member responsible for the history proposal, Julie Williams, released a statement asserting that she “must not have explained [herself] clearly.” She went on to criticize current AP US History textbooks, claiming they “have an emphasis on race, gender, class, ethnicity, grievance, and America-bashing, while simultaneously omitting the most basic structural and philosophical elements considered essential to the understanding of American History for generations.”

But according to Chatfield High senior Ashlyn Maher, there was no misunderstanding. “In that statement she just doubled down on everything she’d already said,” she told me.

"We're not going to listen to empty promises and be influenced as easily as they think teenagers are," said Scott Romano, a junior at Chatfield High School who helped organize a Wednesday protest. "We don't want national colleges to look at Jefferson County, Colorado, and say, 'Oh, you passed the AP exam in Jefferson County? Well, that doesn't mean the same thing as passing the AP exam in other districts."

Indeed, the students have the support of College Board, the organization in charge of the Advanced Placement program. "These students recognize that the social order can -- and sometimes must -- be disrupted in pursuit of liberty and justice," read a statement released by the organization. "Civil disorder and social strife are at the patriotic heart of American history -- from the Boston Tea Party to the American Revolution to the Civil Rights Movement."

The statement continued to note that if a school district "censors essential concepts from an Advanced Placement course, that course can no longer bear the 'AP' designation."

"What's the end game? What is to be gained from taking away a day of education for students and putting families in a difficult situation?" asked Superintendent Dan McMinimee. Oh, I don't know ... upholding the freedom to an unbiased education? Seems pretty worthy to us.