Leon Panetta's account of the withdrawal of U.S. troops from Iraq differs significantly from what he said in 2011 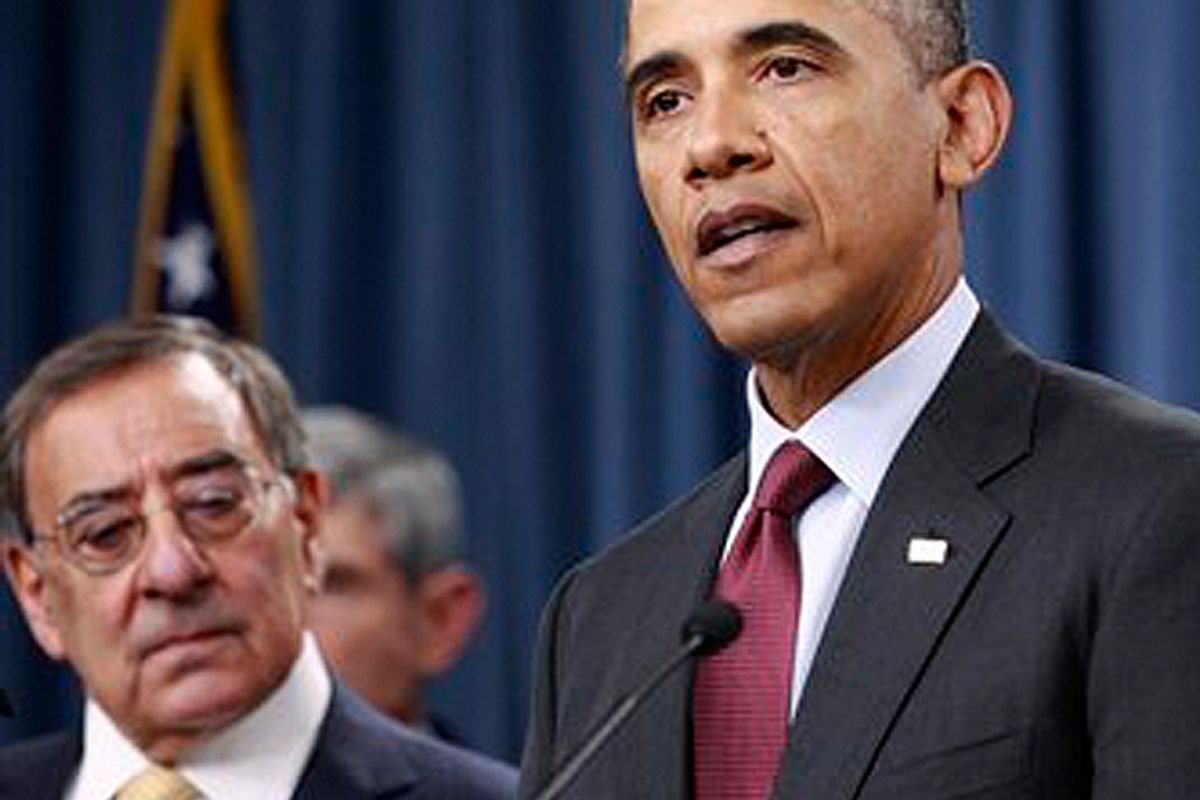 Former Secretary of Defense Leon Panetta caused quite a stir today when he wrote a piece for Time magazine laying blame for the current chaos in Iraq at the feet of the Obama administration. According to Panetta, who was leading the Defense Department while the U.S. negotiated its final withdrawal of troops from Iraq in 2011, “those on our side viewed the White House as so eager to rid itself of Iraq that it was willing to withdraw rather than lock in arrangements that would preserve our influence and interests.”

Conservatives were jubilant upon reading this, as they’ve been arguing for some time now that George W. Bush actually “won” the Iraq war and then Obama blew it all by pulling all the troops out. That’s an absurd and grossly reductive take on the situation, but when you’re trying to cleanse yourself of the lingering stain of the worst foreign policy debacle in recent history, you can’t afford to be completely forthright.

To sum up the situation: in late 2008, George W. Bush and Iraqi prime minister Nouri al-Maliki signed a security agreement stipulating that all U.S. troops would be withdrawn from the country by the end of 2011. Starting in 2010, the Obama administration began negotiating with the Iraqis to rejigger the agreement to allow a small residual force of American soldiers to remain behind. Those negotiations were ultimately unsuccessful. By October 2011 both sides had agreed that all troops would be gone by the end of that year, in accordance with the original security agreement.

The longstanding explanations for why the negotiations failed were the unwillingness of Iraq’s government to extend needed legal immunities to U.S. forces, and reluctance among Iraq’s political leaders to countenance a continued U.S. military presence.

Panetta, in his Time piece, argues that the administration could have forced the Iraqis into agreeing to a new arrangement if they’d used more economic leverage and if President Obama had interceded to get Maliki on board with the program, and that a residual U.S. force could have prevented the rise of the Islamic State:

We had leverage. We could, for instance, have threatened to withdraw reconstruction aid to Iraq if al-Maliki would not support some sort of continued U.S. military presence. My fear, as I voiced to the President and others, was that if the country split apart or slid back into the violence that we’d seen in the years immediately following the U.S. invasion, it could become a new haven for terrorists to plot attacks against the U.S. Iraq’s stability was not only in Iraq’s interest but also in ours.

To my frustration, the White House coordinated the negotiations but never really led them. Officials there seemed content to endorse an agreement if State and Defense could reach one, but without the President’s active advocacy, al-Maliki was allowed to slip away. The deal never materialized. To this day, I believe that a small U.S. troop presence in Iraq could have effectively advised the Iraqi military on how to deal with al-Qaeda’s resurgence and the sectarian violence that has engulfed the country.

It’s an interesting take for a number of reasons. First off, it contradicts pretty much everything Leon Panetta told the Senate Armed Services Committee during a November 2011 hearing on the Iraq withdrawal. During that hearing, Panetta blamed the failure to arrive at an agreement on Maliki’s inability to garner political support:

Actually as Director of the CIA, I had talked with Prime Minister Maliki regarding this issue, and then when I became Secretary of Defense, I had a number of conversations with him as well in which I made very clear, along with General Austin and Ambassador Jeffrey, that it was extremely important that we needed to have a Status of Forces Agreement (SOFA), that we needed to have immunities for our troops, that we needed to have that protection. He believed that there was possibly a way to do this that did not involve having to go to the parliament, to their council for approval.

It was very clear, among all the attorneys here, that we absolutely had to have their approval through their parliament if we were going to have a SOFA that provided the kind of immunities we needed. I cannot tell you how many times we made that clear. I believe the Prime Minister understood that, and it was at the point where he basically said I cannot deliver it, I cannot get it through the parliament that we were then left with the decisions that were made.

JOHN MCCAIN: Now, maybe they [Iraqi political leaders] were not telling us the truth, Mr. Secretary. But we have a relationship with them that goes back many, many years, and they have always told us the truth. The truth is that this administration was committed to the complete withdrawal of U.S. troops from Iraq and they made it happen.

PANETTA: Senator McCain, that is just simply not true. I guess you can believe that, and I respect your beliefs.

MCCAIN: I respect your opinion.

PANETTA: But that is not true.

MCCAIN: The outcome has been exactly as predicted.

PANETTA: But that is not how it happened.

Now Panetta is saying yes, that is what happened. Bit of a tension, there, and not just with his own testimony, but also with the accounts of other Pentagon officials who were involved with the negotiations and said that the insurmountable obstacle was political resistance from the Iraqis.

“Iraqi domestic politics made it impossible to reach a deal,” wrote Colin Kahl, the former deputy assistant secretary of defense for the Middle East. “Maliki was willing to consider going to parliament to approve a follow-on agreement, but he was not willing to stick his neck out. Other political factions would have to support the move, and the support wasn’t there.” Kahl concluded that “there was little the administration could have offered or threatened to change their calculations. It was simply too toxic, politically, for Iraqi politicians to accept.”

Panetta obviously feels differently. Or rather, he feels differently now compared to how he felt three years ago. At the 2011 hearing, Panetta reminded the senators time and again that the U.S. had been negotiating with the sovereign nation of Iraq and had to respect the decisions of its political institutions. “This is about negotiating with a sovereign country, an independent country,” Panetta said. “This was about their needs. This is not about us telling them what we are going to do for them or what they are going to have to do for us.” After a number of Republican senators had pressed him on the residual force, Panetta finally snapped and took out his frustrations on then-Sen. Scott Brown. “I get the impression here that somehow everybody is deciding what we want for Iraq and that that is what should happen,” he said. “But it does not work that way. This is an independent country.”

Now Panetta is saying the exact opposite: that what we wanted for Iraq is what should have happened, and that we could have used our economic leverage to strong-arm the Iraqi government into agreeing to U.S. terms. The fact that Panetta even floated so drastic an option as to completely cut off U.S. development funds is a good indicator of just how much resistance had to be overcome. It also seems unlikely that the U.S. would have followed through on that threat, since much of the reconstruction money sent to Iraq was for training and equipping its security forces.

That gets to the nub of the matter: the argument that the rise of ISIS is the fault of the Obama administration for withdrawing completely from Iraq is that Obama didn’t force the Iraqis to do something they didn’t want to do. Panetta explicitly argues that Obama could have single-handedly overcome the political resistance in Iraq if only he'd bothered to. The argument we were fed during the Bush years that we invaded Iraq to bring freedom and democracy to the region. Now we’re being told to blame the president for not working hard enough to undermine the will of Iraq’s political leaders. It's almost like we have an unrealistic and completely schizophrenic notion of what American power can accomplish in the Middle East.