Questions and answers about the US Ebola case 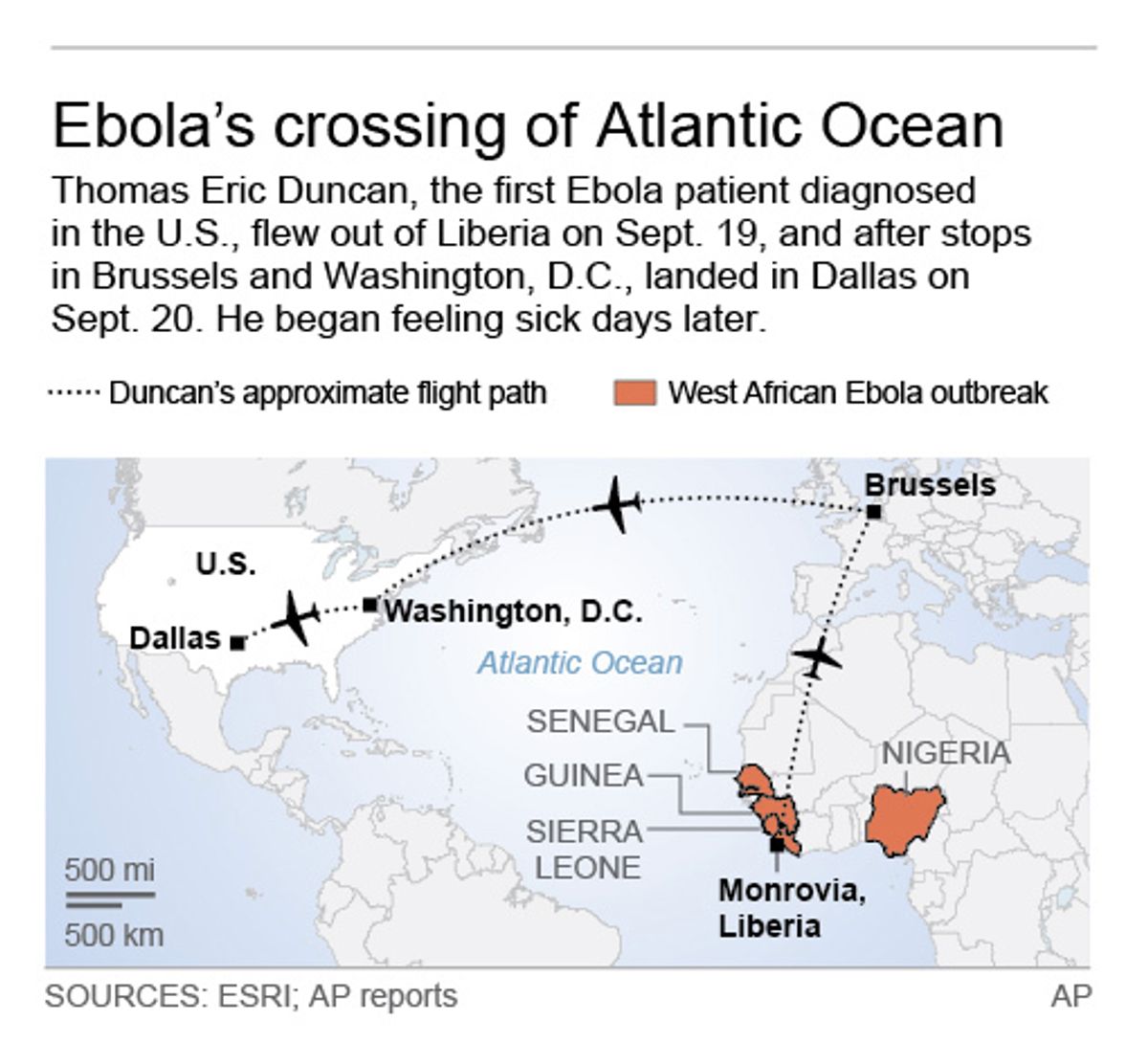 WASHINGTON (AP) — U.S. health officials have warned for months that someone infected with Ebola could unknowingly carry the virus to this country. Now it has happened: A traveler in a Dallas hospital became the first patient diagnosed in the U.S.

Texas health officials said there were no other suspected cases in the state, and the Centers for Disease Control and Prevention immediately sought to calm fears that one case would spread widely.

Key is finding and tracking anyone who was in close contact with the patient from the time he fell ill until he was put in isolation, said CDC Director Dr. Tom Frieden.

"There is no doubt in my mind that we will stop it here," he said.

Some questions and answers about the case:

Q: Where did the traveler come from?

A: Liberia, the hardest-hit country in the West African epidemic. The patient left Africa on Sept. 19 and flew to Brussels, then to the Washington area and arrived the next day at the Dallas-Fort Worth International Airport for a visit.

Q: When did the patient get sick?

A: Last Wednesday. Texas Health Presbyterian Hospital said he initially sought care late last Thursday night for fever and abdominal pain. He told a nurse he traveled from Africa but that information wasn't passed along, and he was released. He returned Sunday by ambulance and admitted under strict isolation. Tests confirmed Ebola on Tuesday.

Q: How does Ebola spread?

A: Only through close contact with the bodily fluids of someone who has symptoms, such as fever, vomiting and diarrhea. People aren't contagious until symptoms begin. And Ebola cannot spread through the air.

Q: How is Ebola diagnosed?

A: Some of the symptoms of Ebola are similar to other ailments; a blood test is done to confirm an infection. Frieden explained that tests done early may miss the virus. "Even in the initial phases of illness, when they've got a fever, the most sensitive tests in the world don't detect it because there's so little virus," he said.

A: Officials are monitoring 12 to 18 people who may have been in contact with the man, including three members of the ambulance crew that transported him to the hospital and five schoolchildren. Officials will check them for symptoms every day for 21 days. "That's how we're going to break the chain of transmission and that's where our focus has to be," Frieden said.

Q: Could Ebola have spread on the airplane?

A: No, Frieden said, because the man wasn't sick then. The CDC said there is no need to monitor anyone else on those flights and didn't reveal flight information. United Airlines on Wednesday said the man took Flight 951 to Dulles International Airport and Flight 822 to Dallas-Fort Worth.

Q: Could there be more travelers with Ebola?

A: No one's ruling it out. People boarding planes in the outbreak zone are checked for fever, but that does not guarantee that an infected person won't get through. Airlines are required to report any deaths on a flight or ill travelers meeting certain criteria to the CDC before arriving in the U.S. If a traveler is infectious or exhibiting symptoms during or after a flight, the CDC will conduct an investigation of exposed travelers and take any necessary public health action.

Q: What if I'm worried about exposure?