Andrew W.K.: "I went on Fox News because I've always wanted to see what was in that building"

The "King of Party" on Glenn Beck, the infected tattoo Ke$ha gave him, and that pesky conspiracy theory 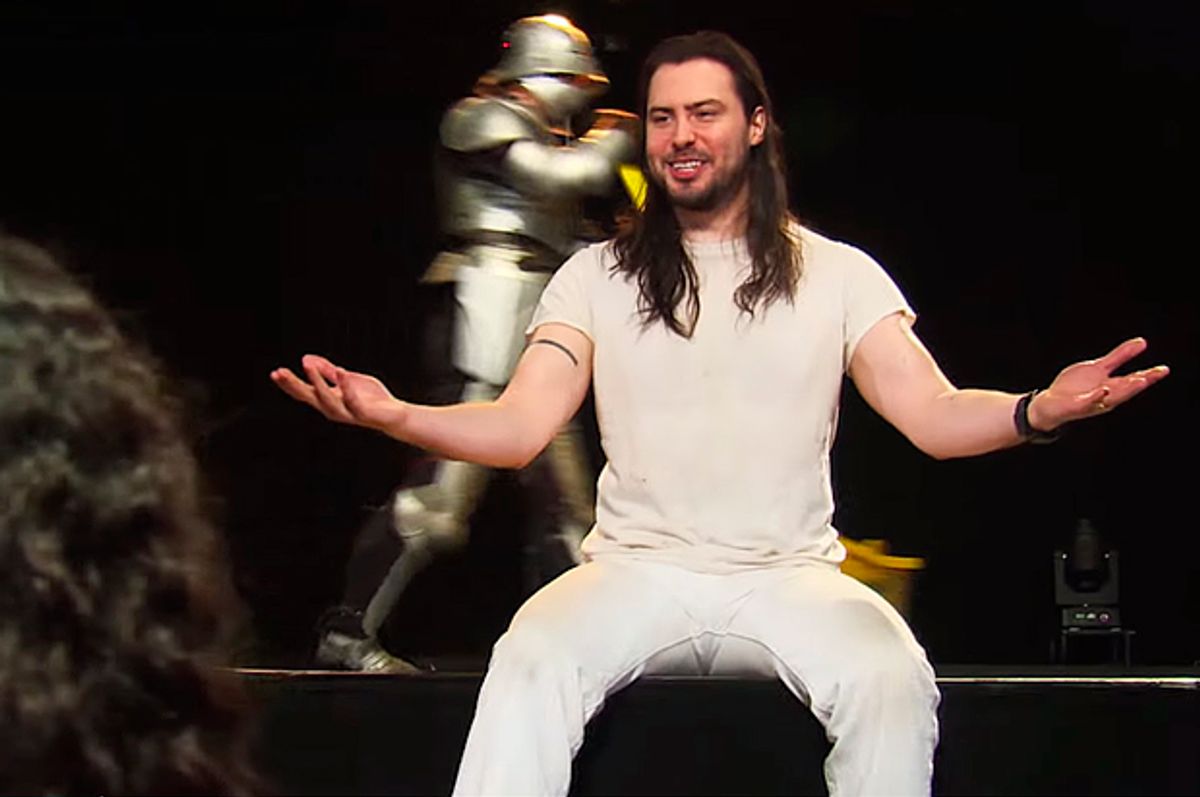 Andrew W.K. been making the rounds at Fox News recently, talking about everything from partisan politics to domestic abuse. He even gained a fan in Glenn Beck. He's been on "Red Eye" 34 times, despite the fact that he's a grungy rock star with a progressive attitude. He's currently writing a book called "The Party Bible," and he also writes a blog for the Village Voice. Andrew W.K. is a kid at heart, despite being 35 years old: Among his most famous singles are “We Want Fun” and “Party Hard,” and he's a self-proclaimed "joy boy." It’s fitting, then, that he’s hosting a new children’s show called “Meet Me at the Reck,” an educational series where Andrew and his little “reckers” celebrate imagination.

No, I was just going to the bathroom. Everybody does it. At least I hope everybody does it. They’ll die if they don't. And hopefully everyone has a clean time. It’s not like there’s a law that says you have to wash your hands. I mean, I’m glad there’s not a law about it, though it would be interesting if there were. There’s basically filth everywhere and there’s no way to escape it.

Ha, this coming from a guy who has said he doesn’t wash his hair.

So your new show, “Meet Me at the Reck,” premieres this Saturday. You also hosted “Destroy Build Destroy,” an explosive children’s show on Cartoon Network, from 2009 to 2011. What is it that makes working on kids’ shows so much fun to you?

Kids’ shows appeal to a fun-loving mentality that I hope all humans, no matter how old they are, have some ability to relate to. It’s a very high-energy, amped-up, adrenaline-fueled atmosphere. Plus, young people have enthusiasm and excitement about the world that’s very fun to be around. Who wouldn’t want to make a kids’ show? It’s a very pure kind of joy, and that’s what I’m all about. I mean, everyone’s been a child, and it’s great to stay as close as possible to that.

You’re also writing a book, "The Party Bible." Reading seems antithetical to your mission of partying.

Reading counts as partying, even if you’re not enjoying it! Even if someone’s forcing you to read, you can find a way to make it into a party if you party hard enough. It just takes more effort and a more advanced approach.

Beyond your party philosophy, what’s the book about?

It’s not about my life, it’s certainly not an autobiography, and it’s not very anecdotal. There’s not much about me in there, hopefully. It’s about life and having as much fun as possible. And I’m very much looking forward to narrating the audiobook version.

When will it be released?

I don’t really know, because I’ve never made a book before. It could be another year, or it could just be a few more months. I have to finish the book before it comes out. That’s the main thing.

You’ve been on Fox News’ late-night show “Red Eye” 34 times. But your attitude and your message seem pretty progressive. Now Glenn Beck is a huge fan. What brought you to Fox, this extremely conservative outlet?

It’s just ’cause they invited me and I’ve always wanted to see what was in that building. I’m not really liberal or conservative or anything. I just try to stay open-minded and learn as I go.

You’re also a motivational speaker. Can you tell me a moment when you wanted to give up? What was it that made you keep going?

Every day I feel like giving up to some degree, and some days more than others. What makes me keep going is that I’m not dead yet. The whole point of this party adventure is to give you energy and enthusiasm about life so that you can keep on living it. And within that, hopefully you learn things about the world and about yourself and have some fun, too.

Are you working on any new music right now?

I have been for a couple years, actually. I’ve been stockpiling songs and I really hope to have a new album as soon as possible. When the time is right I’ll do it, and I’m excited about it. There are so many songs that I’m really enjoying and can’t wait to release and to play live. But I’m not really in control of what I do or when it happens. I’ve turned all that over to the powers that be—in a good way, in a way that I’m fine with now.

But don’t you ever feel like your creativity is quashed because you’ve relinquished control?

Maybe if I wanted to be my own creative self, but that was never very interesting to me, because I didn’t have much to offer. In terms of creative ideas, I don’t take too much stock in my own interests. My life’s mission, that’s not something I got to decide. So I try to keep myself out of the way when it comes to doing this. I think giving any kind of real creative input would ruin it.

What direction is the album going in?

Just the same as always. Party energy, high-energy rock music. It’s not a solo piano album like "55 Cadillac." I released that album because of a contractual obligation. There have been choices I’ve made that I have taken responsibility for; choices that I don’t regret, but I don’t like. I’m extremely unsatisfied with a lot of things I’ve done, but that’s what makes me want to do something more. If I were too satisfied, then I would be like, “OK, I’m done, I did it. Now I’ll go become a biologist.”

When you say you take responsibility for you actions, are you referring to the Steev Mike conspiracy? In 2008 at a lecture you gave in London, you told your fans, “I may not be exactly who you thought I was… the guy who was, in fact, first hired as Andrew W.K. is a different person than the guy sitting here on the stage tonight. I’m the next person who is playing Andrew W.K.”

The conspiracy theories that people have are their own. I don’t want to bash them, because people should be able to think whatever they want. It was very frustrating at times to have those accusations. Did I get taken advantage of? Yes. Were there bad contracts? Yes. But no one forced me to sign anything. I feel quite confident that I wouldn’t be here doing any of this if things hadn’t gone the way they had. I’m just trying to continue on. A lot of what fuels my motivation is frustration and dissatisfaction.

On another note, I heard you got a tattoo from Ke$ha and it got infected.

What was the tattoo? I assume partying was involved.

I have several tattoos, some of which I’ve given myself. We were partying, and that came up in conversation. She said, “Oh, well I’m very good at giving tattoos. I’ve given many people tattoos. Would you like me to give you a tattoo?” And I said she could continue this one line that I had started many years ago. And she did! She had a safety pin, which really isn’t the best thing to use, but we burned it under a flame to make it more sterile, and dipped it in some clear alcohol, and it seemed fine. She did a good job on it. But maybe a week or two later, it got infected. I went to the doctor and they put some stuff on it and gave me some pills. She’s a very nice lady, and she did do a good job. There’s a little scar there, but it’s totally fine.

What do the lines, your tattoos, represent?

Kate Beaudoin can be reached @katelbeaudoin.