Chris Matthews vs. Obama: How the president lost one of his top supporters 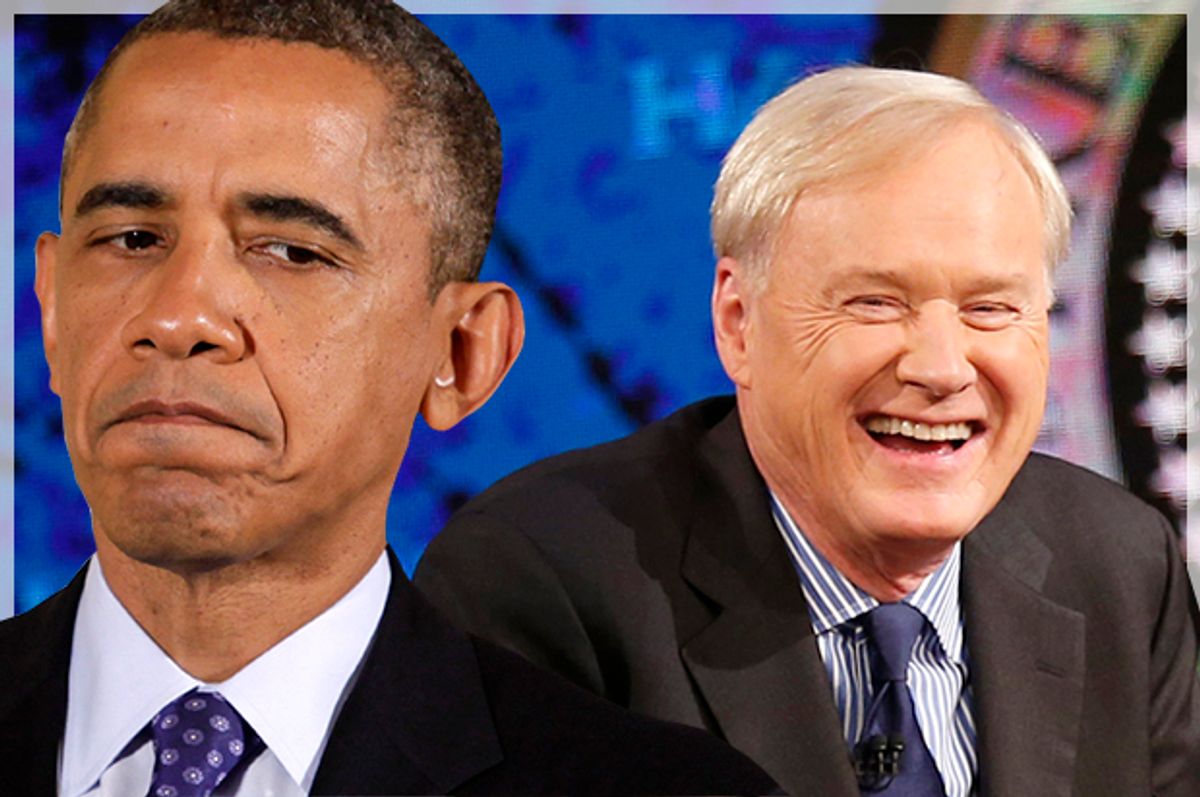 Chris Matthews has gone stark raving nuts. I know, I know. How is this different than any other time? Well, there's something special about what happens to some political pundits when war fever breaks out and Matthews is one of the most special of them all. It's true that he has worked very hard over the past few years to erase the memories of his Iraq war cheerleading, repeatedly pointing to a couple of obscure skeptical columns he wrote in the run-up while ignoring his much higher profile boosterism on television. Oddly, he even told a gathering of cable industry insiders that if only there had been 24 hour cable news back in 2003, the Iraq war could have been appropriately challenged. As FAIR pointed out in this report, cable news did exist during that period and it was led by people who said things like this:

Chris Matthews: "Those people out in the streets [protesting the IMF], do they hate America?"

Hardball correspondent David Shuster: "anti-Americanism is in the air."

On April 9th, the day the statue of Saddam was pulled down in Baghdad (which we later learned was an orchestrated PR event) Matthews declared: "We're all neo-cons now." Indeed, throughout the post 9/11 period, Matthews consistently marveled at President Bush's puerile rhetoric as a prime example of manly leadership. But what he really yearned for was a real life movie star action hero and he finally got one on May 1, 2003 when the president donned a costume and landed in a jet on an aircraft carrier:

What's the importance of the president's amazing display of leadership tonight?..

What do you make of the actual visual that people will see on TV and probably, as you know, as well as I, will remember a lot longer than words spoken tonight? And that's the president looking very much like a jet, you know, a high-flying jet star. A guy who is a jet pilot. Has been in the past when he was younger, obviously. What does that image mean to the American people, a guy who can actually get into a supersonic plane and actually fly in an unpressurized cabin like an actual jet pilot?...

Do you think this role, and I want to talk politically… the president deserves everything he's doing tonight in terms of his leadership. He won the war. He was an effective commander. Everybody recognizes that, I believe, except a few critics. Do you think he is defining the office of the presidency, at least for this time, as basically that of commander in chief? That… if you're going to run against him, you'd better be ready to take [that] away from him...

The president there — look at this guy! We're watching him. He looks like he flew the plane. He only flew it as a passenger, but he's flown….He looks for real. What is it about the commander in chief role, the hat that he does wear, that makes him — I mean, he seems like — he didn't fight in a war, but he looks like he does.

That was, to say the least, a curious reaction from a man who says he was against the Iraq war. Of course, he wasn't alone. Throughout the period it was taken as an act of faith that the president was hugely popular -- even as his numbers tumbled below 50% the political pundits refused to accept it. And there was very little pushback from the media on Iraq, especially in cable news. Indeed, anyone who showed skepticism or tried to examine the beliefs of the very large numbers of Americans who were not in favor of the war in those days was unceremoniously booted from the network. (And Matthews endorsed their booting, by the way.) So perhaps his latest round of criticism toward President Obama's response to ISIS is just his survival instinct kicking in. Whatever the motives, the last few weeks of Hardball have been a full fledged fear festival.

It started back in August when ISIS released that horrifying video of journalist James Foley being executed. No decent person could have felt anything less than revulsion. But not everyone had the immediate, hysterical reaction Chris Matthews had to the president's speech condemning it:

"I don't know why he used the word 'justice.' It's not appropriate here. This is an attack on our country, we have to react to it .. .This is our country versus this group that's declared war on us. What's justice mean in this con-- I don't know why the word's used, like we're going to go to the World Court with this ... no American president can survive if he lets Americans be beheaded on international television with impunity. Impunity! He has to strike back, as an American, it's in our soul!"

Even Fox News was more subdued than that. But that's Matthews' pundit style perfectly realized. He believes in the Great Man theory of everything and sees every event through the prism of the president's relative manliness. The president failed to satisfy him again on September 10th when he announced his plan for ISIS in Iraq and Syria:

I heard all the necessary conditions but not the sufficient conditions for defeating ISIS. And I didn't hear in there how we're going to encourage the Arab countries, the Islamic world to go after ISIS. I didn't hear that. I heard air strikes by the United States. I heard military training and support for the Free Syrian Army. I heard vague reference to someone over there flying with us over Syria right now without saying what country that was, what ally that was. Nothing really about the building of a posse. And everyone from David Ignatius and others who really know this region are saying the only way you defeat a cancer like this, like ISIS, is within the Islamic world itself. They must find themselves the strength and the determination to go in and erase this blot on their culture. And I didn't hear in this speech how we're going to do that or if we can even imagine being the leaders of such an effort. Again, I'll say these are necessary steps. They didn't sound sufficient.

Ok, so he thought the president should be putting together a posse to defeat cancer and he failed to say he was doing that. Of course, he actually did put together a regional coalition but that doesn't appear to have appeased Matthews who is now terribly worried that the President isn't choosing the right people to advise him. Yesterday he spelled it out in the terms that make the most sense to him. After rending his garments over Ebola and suggesting that America start quizzing all travelers in the Israeli style just to make them sweat, he wondered if President Obama was up to the job:

Let's get tough here. Is this the problem of a second term that presidents get lazy, intellectually lazy and cut off from the country, and they start picking deputies for jobs instead of looking for the best people? The lazy thing to do is, somebody leaves, you promote their deputy. This is, I think, a big part of the endemic problem of second terms. They don`t get out and mix with people, find new people, new hot shots to fill these jobs. They just keep promoting the person whose sort of turn it is, and they`re not as good as the person they picked the first time...

Realizing that he had evoked a racist stereotype, he corrected himself. And then went right ahead with a patented Matthews sexist comment:

I want to straighten out something I said to Roger before you get me accusing him, accusing this president of being physically lazy. I think there`s a social kind of laziness, the refusal to reach out and meet a lot of new people and check a lot of possibilities. Don`t just go with the next person in line. And I really think this second term cabinet is not up to the first term cabinet because they never are.

And you know that, Roger. They just never are. Kennedy went out and met people like McNamara and Rusk and people went looking for them, and he put them in the best slots he could. He talked them into it. He recruited people he didn`t even know, he recruited them. Presidents should go out and look for people. They should be practicing affirmative action all the time in leading, or else they get atrophied into that little world of people around him like Valerie and Mrs. Obama and people -- you`re just listening to the same voices all the time. You`ve got to be Protean in the White House. And I know it`s a rigorous demand, but it`s a real one, or else you`re going to get smaller as your presidency goes on, and therefore more vulnerable to surprises.

Real men don't listen to the "little world" of "Valerie" and "Mrs Obama," especially when terrorists and deadly diseases are involved. (Maybe they could be consulted on the birth control mandate or something like that.) That's obtuse enough. But nothing can equal the sheer daftness of Chris Matthews evoking the architects of the Vietnam war as great examples of presidential cabinet choices. Perhaps if President Obama is lucky, he too will find someone as good as the men who mired this nation into the worst foreign military quagmire it's ever known.

But he also might want to get fitted for a flight suit, just in case.