Warning: Amount of irony in this story may lead to head explosion 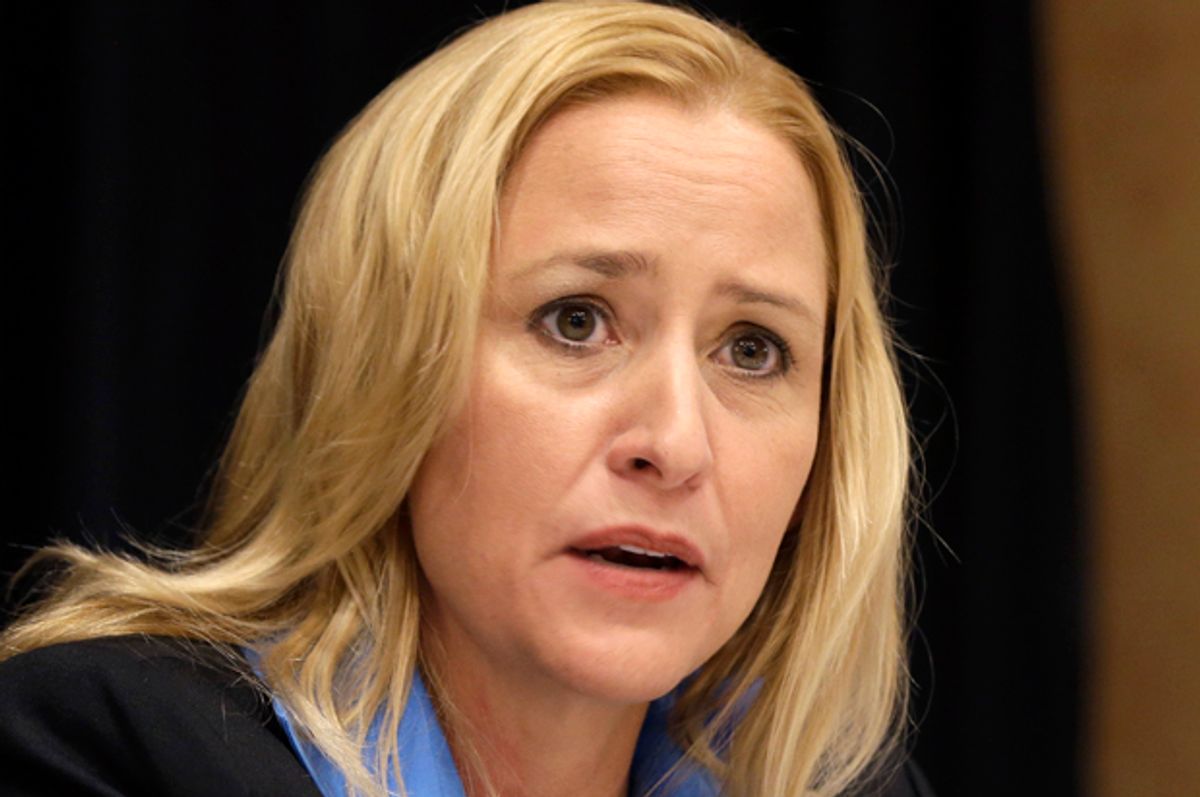 UC Irvine law professor Rick Hasen says this development, which he describes as coming from the "Irony Dept," is just "too delicious".

According to the Arkansas Democrat-Gazette, Rutledge has now been removed from Arkansas' voting rolls by the Pulaski county clerk, after he confirmed that she was registered to vote in D.C., and possibly Virginia. The removal from the rolls may also lead to her ineligibility to be elected to office.

"For the AG candidate of the party who likes to scream about voter fraud to be registered in two (or three) places at once is ironic and amusing on its own," writes Matt Campbell of Arkansas' Blue Hog Report, which was on this story from the jump.

"However, the bigger implication is Article 19, section 3, of the Arkansas Constitution," he adds, which states: "No persons shall be elected to, or appointed to fill a vacancy in, any office who does not possess the qualifications of an elector." If Rutledge is not registered in Arkansas, she no longer "possess[es] the qualifications of an elector."

But, believe it or not, none of that is the actual ironic part that Hasen was referring to in his piece on this today. Yes, it gets even more ironic!...

The Republican National Lawyers Association (RNLA) is furious that Rutledge has now been removed from the voting rolls.

The RNLA is the right-wing group which has, for years, been at the forefront of pretending there is massive voter fraud going on, and pushing for disenfranchising polling-place photo ID restrictions and supporting mass voter registration roll purges by Republican officials, even if the purges take place inside the 90 days before a federal election when systematic purges are supposed to be in violation of the federal National Voter Registration Act (NVRA).

It was at an RNLA gathering in 2006, where then George W. Bush's White House political director Karl Rove spoke and thanked the gathered attorneys for their "work on clean elections" in recent years.

"I know a lot of you spent time in the 2004 election, the 2002 election, the 2000 election in your communities or in strange counties in Florida, helping make it certain that we had the fair and legitimate outcome of the election," Rove said at the time, before going on to, ironically enough, compare U.S. elections to "those run in countries where the guys in charge are, you know, colonels in mirrored sunglasses."

While the RNLA has gone to court defending mass pre-election purges in years past, now they are flipping that script to pretend that the removal of Rutledge from the rolls by Pulaski's Democratic County Clerk Larry Crane amounts to a "systematic" purge, "almost certainly in violation of federal law".

"Having served on a state election board, I know that one of the most fundamental rules is that under the National Voter Registration Act voters cannot be systematically removed from voter rolls within 90 days of a federal election," says RNLA Chairman J. Randy Evans in a statement today. "Yet, that is exactly what the Democrats have done in Arkansas."

"The fact is that it is a clear and unmistakable attempt at the most harmful kind of voter suppression in violation of federal law -- removing a qualified female voter from the rolls notwithstanding her valid registration and actual votes in the last 4 elections in violation of her civil rights. Democrats should be embarrassed," Evans railed.

Election law expert Hasen responds to the RNLA's statement to note that "usually it is Democrats fighting a last minute voter purge under the NVRA."

"My understanding of these provisions is not deep," he adds, "but my impression is that the NVRA only stops large, wholesale voter purges and not the individual removal of ineligible rolls for particular reasons."

That is our understanding of the law as well. Though that has not stopped folks like Florida's Republican Gov. Rick Scott from attempting to carry out huge registration roll purges just prior to elections, as he attempted in 2012. At the time, Scott attempted to claim that while wholesale purges might be in violation of federal law, the same statutes also required the removal of specific voters when the state learned of information to demonstrate that the voters were ineligible.

Scott and his hand-picked Secretary of State Ken Detzner were hoping to remove thousands of alleged "non-citizens" from the rolls based on entirely faulty information. Luckily, they were stopped from doing so.

In this case, of course, the removal of a single voter -- who also happens to be a candidate for statewide office -- was done only after the county clerk confirmed her registration elsewhere, and that she had voted in Arkansas even after that new registration.

We haven't yet looked too deeply into the details here, and whether or not Rutledge and the Republicans have a case or not. Campbell at Blue Hog Report has much more on the legal contours in question as well as the timelines of her various residencies, registrations and/or lies about them "under penalty of perjury." The RNLA -- an extraordinarily partisan group that has demonstrated a propensity for simply making shit up over the years -- claims that Rutledge "renewed her voter registration and voted in Arkansas after no longer residing in Washington, DC."

Whether she was actually "no longer residing in Washington, DC" when she voted by absentee ballot back in Arkansas in 2008 seems to be at the core of the issue. She claims that she legally re-registered back in Arkansas in March of 2013. While that hardly makes her November 2008 absentee vote legal, it would, if true, raise questions about her removal from the rolls this week in Arkansas.

In any case, the RNLA (for some strange reason) seems to be focusing less on whether she was legally registered in the past, and more on whether she has been inappropriately removed from the rolls by the Pulaski County Clerk who, both she and the RNLA charge, violated the law himself by both removing her from the rolls and by not informing her previous jurisdiction when she re-registered in Arkansas earlier this year. Or something.

The irony in all of this -- particularly about a group that has long claimed that voting rolls are a mess (they sometimes are, since people move and have a habit of dying), charging that Democrats purposely refuse to clean them up and remove voters after they have died or registered elsewhere because they are hoping to encourage massive "voter fraud" (a wholly unsupported claim) -- is far above our pay-grade to adequately express.

So, we'll let Rutledge do that for us. Here's part of a written statement she released this morning:

It is likely that your head has, by now, exploded and/or you certainly appreciate the insane irony in both her outrage, and that of the RNLA here.

But, if you haven't been reading us for long enough to appreciate all of that, perhaps her statement on polling place Photo ID restrictions earlier this year will do the trick. Such measures have been long sought by Republicans across the country, despite the virtual nonexistence of the type of fraud that could even possibly be deterred by such measures. Arkansas Republicans' own version of polling place Photo ID restrictions were recently struck down as a violation of the state's constitution (though the legal battles over that statute in both state and federal courts continue).

You'll be shocked to learn that Rutledge is an ardent supporter of such restrictions on the right to vote by legally registered voters, despite the total lack of "voter fraud" that its proponents are able to show that it might deter, and the enormous number of voters that its detractors have repeatedly and specifically identified as likely to be disenfranchised under such laws.

"As AG," Rutledge boldly declared on her Facebook page in May, before her own potential voter fraud was brought to light, "I'll defend voter ID laws to protect the integrity of our elections."