The RNC chair released a set of policy "principles" for the party on Thursday. It wasn't very specific 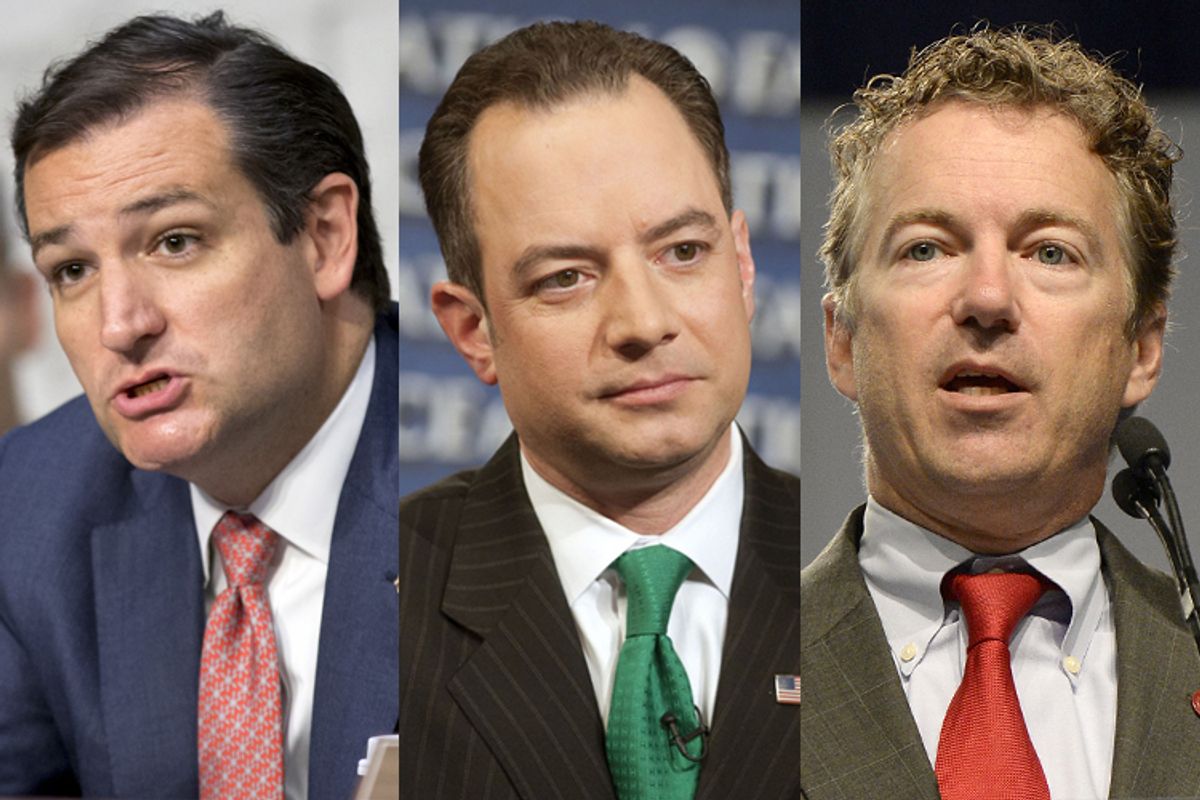 The Republican party has been doing perfectly well in election polling for federal office this fall without coming up with anything resembling a governing platform. But just for old times' sake, RNC chairman Reince Priebus, a guy whose job is to collect money from rich people, has put his top-shelf policy mind to work and developed... do we want to call it a "platform"? No we don't, and neither does he. Reince Priebus has put together a collection of "Principles for American Renewal" to showcase the GOP's governing priorities should you be so kind as to give his party your vote this November.

On the topic of "Constitution": "Our Constitution should be preserved, valued and honored." Literally two "Principles" later, Priebus calls for a change to this perfect, holy document. Congress needs to "pass a Balanced Budget Amendment to the Constitution, make government more efficient, and leave the next generation with opportunity, not debt." So you just go right into the part of the Constitution where it says "leave the next generation with debt," strike "debt," and replace it with "opportunity." Why hadn't anyone thought of this before? (BTW, the "opportunity" that the GOP's favored Balanced Budget Amendments would leave to the next generation is the opportunity to not have Social Security or Medicare. Or more euphemistically: to chart one's own course!)

Other "Principles" include: maintaining national security, good healthcare that is not Obamacare, having lots of energy, being nice to veterans, and having values. On immigration: "an immigration system that secures our borders, upholds the law, and boosts our economy." Which specific immigration measure does that allude to? Anyone? Certainly not the sort of comprehensive immigration reform that Priebus tried and failed to hoist on the party following the 2012 elections.

Okay, enough horsing around. Priebus expanded on some of these piping-hot themes in a speech on Thursday. "The chairman went into significant detail on some issues," the Washington Examiner reports, "but remained very vague on others." He listed some specific policy changes in the healthcare arena. If you guessed "tort reform and allowing people to buy insurance across state lines" because those are the only two things that Republicans ever say about healthcare reform, then you're correct. It's a brave new world.

Beyond the Balanced Budget Amendment and the tired old conservative tweaks-disguised-as-comprehensive-plans to the healthcare system, another concrete policy item Priebus offered was immediate construction of the Keystone XL pipeline. Priebus mentioned that with a Republican Senate, "if we can get some of the bills sitting on Harry Reid’s desk to the president, we can pressure him to sign some of this stuff into law." Now this -- this -- isn't something Democrats should dismiss. While it's unlikely that Obama could be pressured into, say, "reforming" healthcare in a way that leaves the insurance system vulnerable to a race-to-the-bottom, construction of the Keystone pipeline -- a one-off thing -- seems like the sort of policy that he might concede as a token to the Republican Congress (and the conservative Democrats who support it) if it was tucked inside an appropriations bill, sitting on his desk.

There are real risks if the Republicans take control of the Senate, and Obama feels obliged to "offer" them things. But Reince Priebus' Principles mostly leave us in the dark about what those things will be. It's a token of his own, so that when people ask him or other party officials "What's your plan for when you take control of Congress?" they can reference this dumb webpage and skip along. Besides, if the House Republican takeover of 2011 was any guide, a Senate Republican majority would just spend the first few months passing go-nowhere abortion bills.