Scott Walker brags that men don’t like Mary Burke, while a GOP flack touts the party’s edge with white women 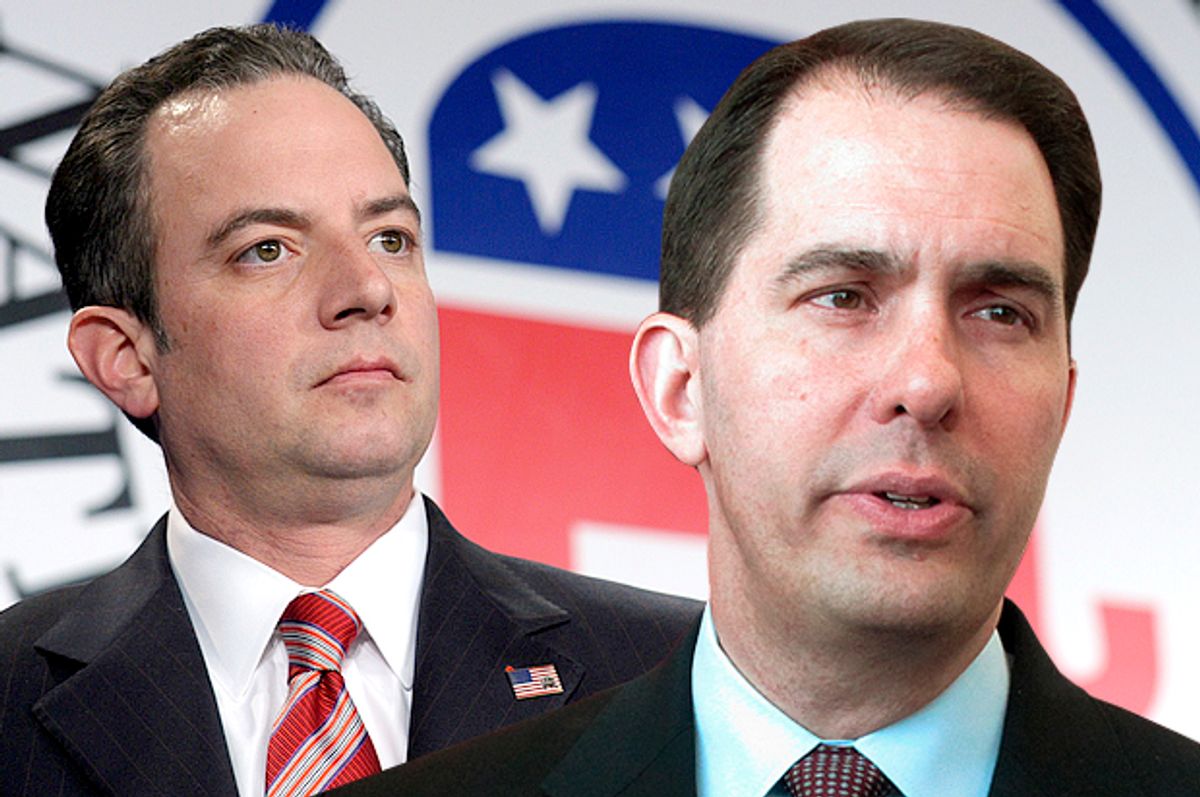 The Republican Party is flailing when it comes to closing the gender gap, also known as the pronounced tendency for women voters to favor Democrats. In his infamous “autopsy” of the party’s 2012 loss, RNC chair Reince Priebus admitted many voters found the GOP “scary” and “out of touch,” and urged Republicans to “address concerns that are on women’s minds in order to let them know we are fighting for them.

Preibus’s party hasn’t quite given up, but GOP efforts to deal with the gender gap continue to betray a cluelessness that’s a little surprising, given how long they’ve been wringing their hands over the problem.

Those idiotic ads that compare choosing a candidate to buying a wedding dress are one recent example, following on the heels of a pitch that compared President Obama to an abusive boyfriend. Then there was Colorado GOP Senate hopeful Cory Gardner telling women he supports over-the-counter birth control pills, so you can get ‘em “round the clock” – as though the pill is something like condoms or Cialis, that you can pop when the time is right. Like Todd Akin before him, Gardner doesn't seem to understand how women's bodies work.

But this week we had two more brazen entries in the “How badly can the GOP handle the gender gap?” contest. Wisconsin Gov. Scott Walker told reporters the real "gender question" is Mary Burke’s problem with men. “I think the bigger trend is not if I have a gender question, it’s actually that she’s off the chart from where a Democrat normally is, gender-wise, with male voters as opposed to female,” explained the man with the lead tongue.

But ladies can say dumb things too. “The media narrative about the 'gender gap' is wrong, or at a minimum mischaracterized," National Republican Senatorial Committee spokeswoman Brook Hougesen told the National Journal Thursday. "In battleground states, Republican candidates are winning a majority of white women, are preferred by married women by double digits, and are statistically tied among single white women. The fact is that Democrats have a far bigger problem with male voters than Republicans do with females."

Hougesen’s coined a new slogan for the 2014 GOP: “We’re doing great with whites, and with men!” When I say that about the GOP base on Salon or on television, I get called an anti-white racist. Now an NRSC flack is bragging about it.

The truth is that the only hope for Democrats to hold the Senate lies with women voters – especially black, Latina and Asian women, along with younger, college-educated and single white women. Support from women is what’s going to keep North Carolina’s Kay Hagan and Colorado’s Mark Udall in the Senate, as they face down two anti-choice, anti-women’s rights candidates. Many battleground states are showing enormous gender gaps.

In Wisconsin, women are key to Mary Burke’s campaign against Walker. One problem for Burke, in the most recent Marquette poll, is that her support among women dropped a few points, while Walker’s support among men actually grew. October will see ads from the National Rifle Association to shore up Walker’s male base while Emily’s List makes its pitch to Wisconsin women.

For all the 2012 handwringing over “diversity,” Walker and many in the GOP apparently think they can win as the party of men and married white women. Democrats need to prove them wrong.