"Guys don't iron other guys' underwear": When characters in movies pretend to be gay

From the appallingly broad to the slightly more complex, a survey of films about faking homosexuality 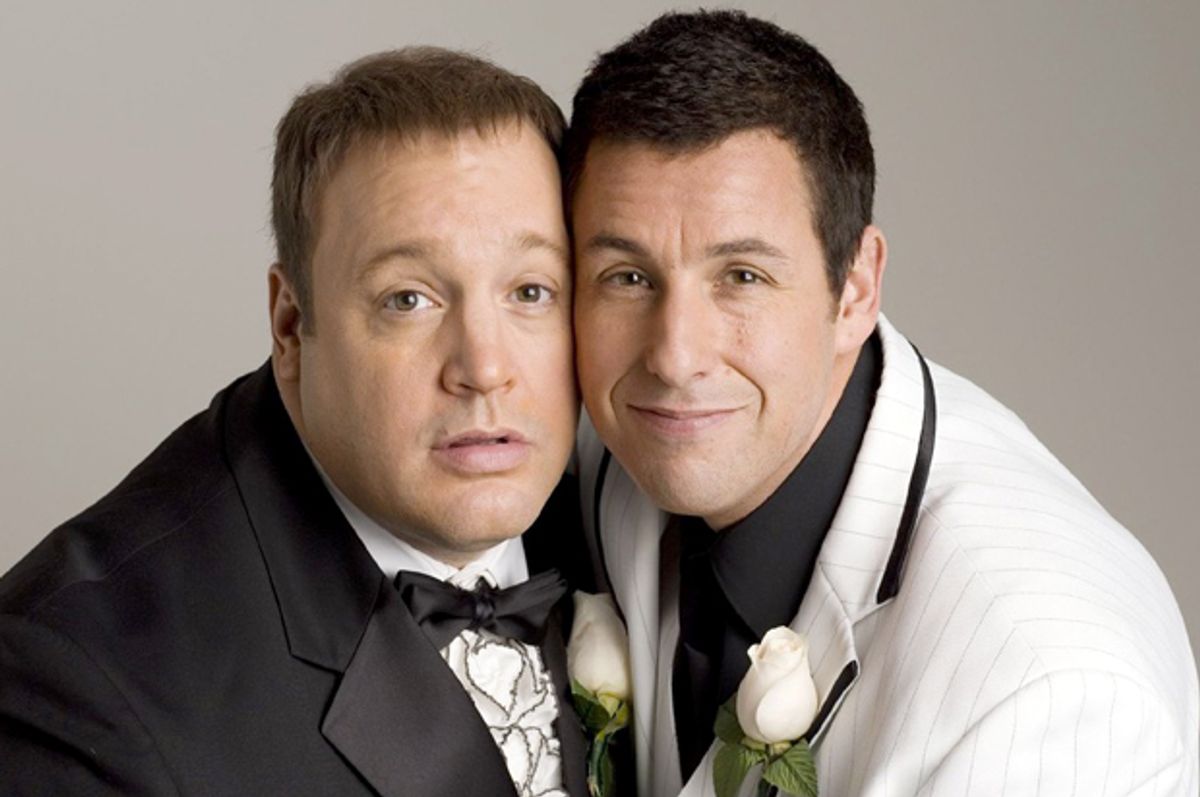 The “coming out” film has long been a staple on the LGBTQ film festival circuit. But there have also been dozens of films in which straight male characters pretend to be gay. In 1969’s "The Gay Deceivers," two men (Kevin Coughlin and Lawrence P. Casey) have to convince a recruiting officer that they are gay to escape military service. Acting gay has been a device on TV in sitcoms like "Three’s Company" and in reality series, such as "Boy Meets Boy," where a guy had to choose a boyfriend and avoid selecting a gay-acting straight one.

Films where characters try to “pass” as gay often mine comic, romantic, or dramatic tropes to examine issues of sexual identity. Do these films help or hurt gay visibility? Do they reinforce or puncture LGBT stereotypes? You can be the judge--but it's worth noting that several of these movies are some of the worst to ever hit the box office. So in honor of National Coming Out Day (Oct. 11), here are a dozen films in which straight male characters pretend to be gay:

"I Now Pronounce You Chuck and Larry": Made before marriage equality was legal in New York, this terrible comedy about two Brooklyn firefighters has widower Larry (an affable Kevin James) saving ladies’ man Chuck (Adam Sandler) on the job. As payback, Chuck agrees to do whatever Larry wants, whenever. Given that he needs to name a beneficiary to insure his kids are covered in the event of his death, Larry asks Chuck to marry him to take advantage of domestic partnership benefits. While the guys believe their fake marriage would be on paper only, fraud investigators check up on them. And of course, Chuck falls in love with Alex (Jessica Biel), the comely lawyer they hire to take their case. "I Now Pronounce You Chuck and Larry" talks out of both sides of its patently offensive mouth when Chuck acknowledges the word “faggot” is not okay when he uses it, but it is worse when it is used to describe him. The film trumpets gay stereotypes in Larry’s effeminate, musical-loving son, and in the guys’ efforts to “gay up” their trash by buying Wham memorabilia. But it does show the title character hitting intolerant taxi cab drivers and Chuck punching out an anti-gay protester. Meanwhile Chuck gets to fondle Alex’s breasts because she thinks he’s gay; a running gag has him perceived to be the “woman” in the marriage.

"Cruising": "Boys in the Band" director William Friedkin’s controversial thriller has cop Steve Burns (Al Pacino) “disappearing” (going undercover) in the gay leather scene to catch a serial killer. Capt. Edelson (Paul Sorvino) gives him this assignment—which will earn him a promotion to detective if he succeeds—because Steve is the killer’s “type.” The job entails Steve learning the “hanky code” and visiting S&M clubs on “precinct night." Steve’s experiences undercover affect him, even though he periodically reaffirms his heterosexuality with visits to his girlfriend, Nancy (Karen Allen). Even when Steve expresses his doubts to Capt. Edelson, stating that he didn’t take this job to shake down gay men because they are gay, the film hints at Steve’s possible conflicts about sexual identity. "Cruising" opens with a title card that the film is not an indictment of the gay community, and it ends with a fascinating antepenultimate shot of Nancy wearing Steve’s cap, leather jacket and mirrored sunglasses. The film is clumsy with its sexual politics, but it remains a real curiosity piece.

"Partners": A comic spin on the "Cruising" plot, "Partners" has handsome straight Sgt. Benson (Ryan O’Neal) coupling up undercover with gay desk clerk Kerwin (John Hurt) to catch a murderer in the gay community. There are bad sight gags—a lavender VW—copious uses of gay slurs, and lisping, limp-wristed stereotypes. The unfunny humor stems from the homophobic Benson insisting, “Guys don’t iron other guy’s underwear!” The sex consists mostly of Benson trying to bed various women while Hurt keeps house for his fake hubby. And the mystery isn’t particularly suspenseful. "Partners" fails on almost every level, though Hurt tries hard with the lousy material.

"Matrimonium": Writer/director Michael Akers puts a “reality show” spin on the acting gay plotline as straight arrow Malcolm (Rick Federman) stands to win a million dollars if he can convince his family and friends that he is going to marry the flamboyant Spencer Finch (co-writer Sandon Berg). This endearing low-budget film was largely improvised by the cast, who play up the perceptions straight men have about being gay—from the effeminate mannerisms to slang and style. But at least Malcolm learns lessons of acceptance and tolerance by walking a mile in a gay man’s loafers.

"Boat Trip": Jilted by his girlfriend Felicia (Viveca A. Fox) after he proposes to her, Jerry (Cuba Gooding, Jr.) and his buddy Nick (Horatio Sanz) are inspired to take a cruise to meet women and have sex. However, an incident at a travel agency has the guys unknowingly boarding a gay cruise. The situation forces the two friends to play gay to make themselves appear “safe” around the women on the ship they lust after. Jerry falls for Gabriella (Roselyn Sanchez), a dance instructor, while Nick has designs on Inga (Victoria Silvstedt), a Swedish tanning model. "Boat Trip" scrapes the bottom of the barrel, with references to gay icons Liza and Bette, S&M gags, as well as a big gay drag number all in the name of "humor." The entire cast humiliate themselves. A scene where Jerry critiques Gabriella’s technique for oral sex—as a gay man, he is supposedly an expert at giving and receiving blowjobs—may be the film’s low point. But Nick’s gay panic after waking up with Ron (Zen Gesner) comes in a close second.

"Freshman Orientation": Originally titled "Home of Phobia," this genial comedy operates on the principle that a straight guy can be more attractive to a woman if he is “sensitive” (read: gay; see "Tootsie"). Clay (Sam Huntington) hopes to bed the object of his affection, Amanda (Kaitlin Doubleday). However, she is on a mission from her sorority to make a gay man fall in love with her. John Goodman plays the local gay bar owner who takes Clay under his wing and teaches him how to be gay. It’s a pandering sequence, with dance lessons and a makeover, but it still amuses because Goodman plays his part with gusto. Ultimately, Clay realizes that acting gay provides him with a new sense of confidence. It’s a misleading twist, given how many queer teens struggle with hiding their sexual identity until they come out and feel comfortable.

"Eating Out: “If only I were gay!” bemoans Caleb (Scott Lunsford), who lusts after Gwen (Emily Brooke Hands) a woman who seems to only date gay men. This comment sparks Caleb’s gay roommate Kyle (Jim Verraros) to hatch a plan: If Caleb pretends to be gay and goes out with Gwen’s hunky roommate, Marc (Ryan Carnes), they can break up so Gwen can comfort Caleb and Kyle can finally connect with his crush, Marc. "Eating Out" features an interesting “threeway” with Gwen turning Caleb on over the phone and talking him through his first same-sex experience with Marc. "Eating Out" (which mysteriously spawned four sequels) pivots on the idea that straight guys like Caleb think gay men can get laid easily, while gay dudes Kyle and Marc complain that straights have it easier. Both are proven wrong in typical rom-com fashion.

"Plan B": This Argentine film has Bruno (Manuel Vignau) coming up with a plan to get his girlfriend back: He will seduce her new boyfriend Pablo (Lucas Ferraro). What makes this plan viable is that Pablo is rumored to have once slept with a man. Does this plan backfire? Yes. The two men begin an intense bromance that prompts them to recalibrate their sexual ideas and identities. Director Marco Berger emphasizes the way these two guys fall very much in love with each other with long, slow shots in which they contemplate their unexpected feelings for one another. A scene in which Bruno and Pablo kiss is a highlight; it forces them to confront their feelings as straight men toward gay men. And, strangely enough, they both secretly enjoy it.

"Happy, Texas": This Sundance hit (which flopped at the box office) concerns two escaped convicts mistaken for gay beauty pageant hosts in the title town. The film benefits from Steve Zahn’s goofball charm as Wayne Wayne Wayne, Jr., one of the two men masquerading as gay. Jeremy Northam is his partner—in crime, not love, despite what folks are (mis)led to believe. While the comedy plays up the fact that neither man knows much about beauty pageants, at least it does not milk gay stereotypes for cheap laughs.

"Three to Tango": The movie hinges on the assumption that the straight architect Oscar (Matthew Perry) is well, “you know”—apparently code for gay—when someone overhears how honored he is to be the “partner” of Peter (Oliver Platt), a gay man. Of course Oscar is talking about being a business partner, but the supposition prompts Oscar and Peter’s potential boss Charles (Dylan McDermott) to ask Oscar to keep tabs on Charles’ mistress Amy (Neve Campbell). Because he’s gay, so he won’t be attracted to her. Of course, Oscar falls in love with Amy. "Three to Tango" has Oscar talking about the fact that sexuality shouldn’t matter, but of course, the mistaken sexual identity issue does matter to him—particularly when a newspaper headline announces that Oscar is “proud to be gay.” The news shocks his friends and family members, and he gets unwanted attention from strangers on the bus, as well as Amy’s ex, Kevin (Cylk Cozart), a hunky and closeted football player. "Three to Tango," at least, sort of conveys the energy involved in keeping one’s true sexuality a secret.

"The Closet": This French farce (ripe for an American remake) has François (Daniel Auteuil) pretending to be gay to save his job in a condom factory. His strategy—suggested by a gay neighbor who was fired for being out on the job—is that the boss would be too worried about a lawsuit to give him a pink slip. Of course, the effect of this milquetoast straight man’s “outing” makes him more interesting and attractive to everyone. Suddenly, his brutish co-worker Santini (Gerard Depardieu) is being friendly to François because he fears he may be fired for acting homophobic. And François, who is a real wallflower, suddenly becomes the center of attention—most notably when he wears a condom on his head while on a float during a gay pride parade. "The Closet" may have some obvious laughs, but they are actually quite funny.

"Cote d’Azur": This fizzy French sex comedy has Béatrix (Valeria Bruni Tedeschi) and Marc (Gilbert Melki) grappling with the fact that they think their son Charly (Romain Torres) may be gay, like his friend Martin (Edouard Collin). Martin is crushed on Charly, but Charly isn’t gay; he only pretends to be to fool his gullible parents. When Charly hits a local cruising spot and connects with the gay Didier (Jean-Marc Barr), he soon learns that Didier was his father’s former lover. Just who is fooling whom here?