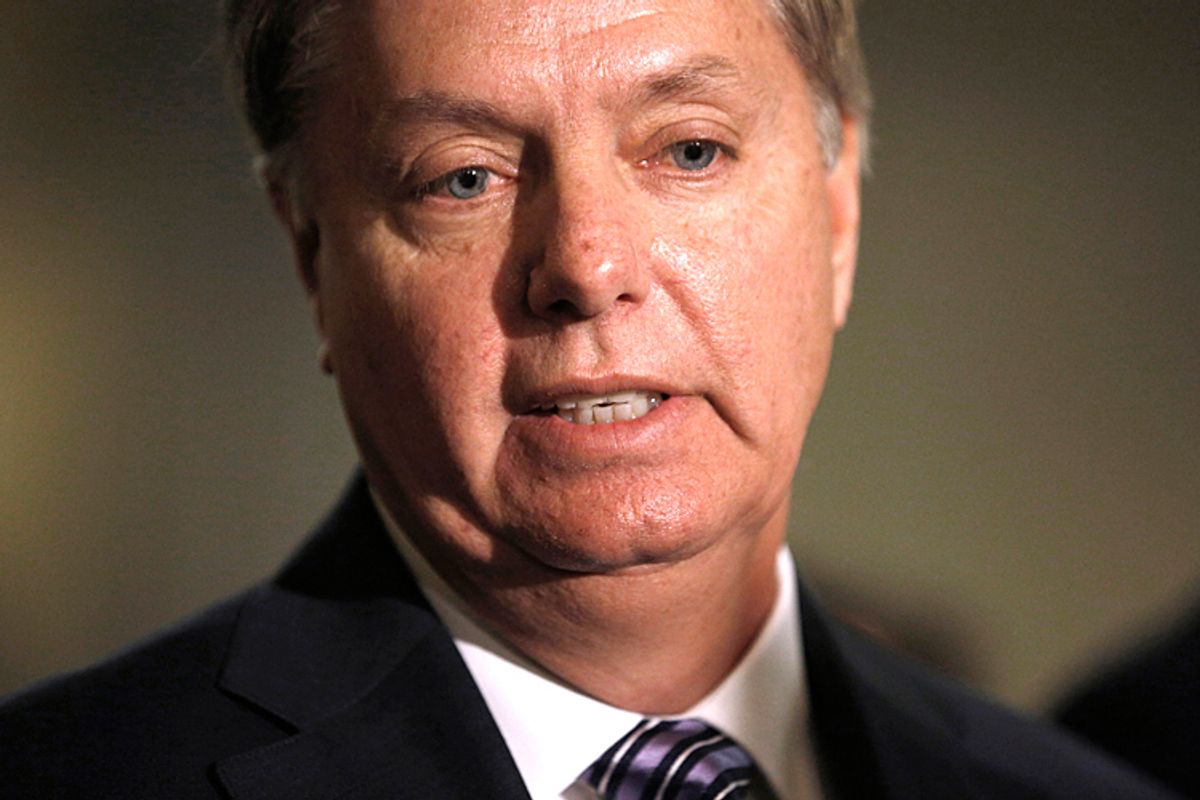 Sen. Lindsey Graham, hands-down the most popular and best loved politician in America, bestowed upon the beleaguered nation a glittering ray of hope this morning by making it known that he is considering a run for the presidency in 2016. In an interview with the Weekly Standard, Graham said that the host of foreign policy challenges facing the country are so very serious that they demand the sort of calm and steady leadership that only he can provide. “If I get through my general election, if nobody steps up in the presidential mix, if nobody’s out there talking ​— ​me and McCain have been talking​ — ​I may just jump in to get to make these arguments,” Graham said.

“These arguments” are, of course, the Lindsey Graham foreign policy platform that Americans have come to respect -- even love -- over the past decade. Arguments like: invade Iraq because Saddam Hussein has WMDs; invade Iraq again to fight terrorists; send U.S. forces to fight in Syria; the president can secretly order the killing of American citizens; deny terrorism suspects their rights as American citizens because “the homeland is the battlefield;” and (my personal favorite) “free speech is a great idea, but we're in a war.” This is the platform of a serious, serious man who is very serious.

Only a rational thinker like Lindsey Graham’s could look at the Islamic State’s threatening arsenal of pickup trucks and AK-47s and conclude that they represent an existential threat to the U.S. with the capacity to kill every single person in the United States of America. Only a sober observer of international politics could look at global affairs and conclude that “the world is literally about to blow up.” Only a sharp foreign policy mind like Lindsey Graham’s could make the connection between Russia’s invasion of Ukraine and the 2012 terror attacks in Benghazi.

Speaking of Benghazi, no one understands better than Lindsey Graham that even when a question about Benghazi has been answered, it’s hasn’t been “answered.” That’s why Graham promised to block President Obama’s nominations for secretary of defense, CIA director, and literally every other government position that requires Senate approval until those “scumbags” in the White House answered his endless litany of questions about the attack. He understood that the administration’s failure to capture any of the Benghazi attackers demonstrated weakness, and that the administration’s successful capture of a Benghazi attacker also demonstrated weakness. And he knows that the best way to ferret out the truth about Benghazi sometimes requires unorthodox methods, like feeding misinformation to credulous reporters to put pressure on the White House.

And while it seems to be a foregone conclusion that Graham will win the presidency in an epic landslide, what remains to be seen is which political banner Graham will run under. He can’t very well run as a Republican; he’s already said that if the GOP fails to pass comprehensive immigration reform, then “it doesn’t matter who you run in 2016” because the Republicans would be “in a demographic death spiral.” He understands that the GOP is full of loony, nativist crazies who propose outlandish and offensive measures like amending the Constitution to revoke birthright citizenship.

And so Lindsey Graham will chart a new path to a future of boundless hope, softly illuminated by the distant, constant glow of explosions in the Middle East, and guided by that timeless creed: “Benghazi, Benghazi, Benghazi.”