The Alex Jones of the U.S. Senate: Why Rand Paul is still just a conspiracist nut 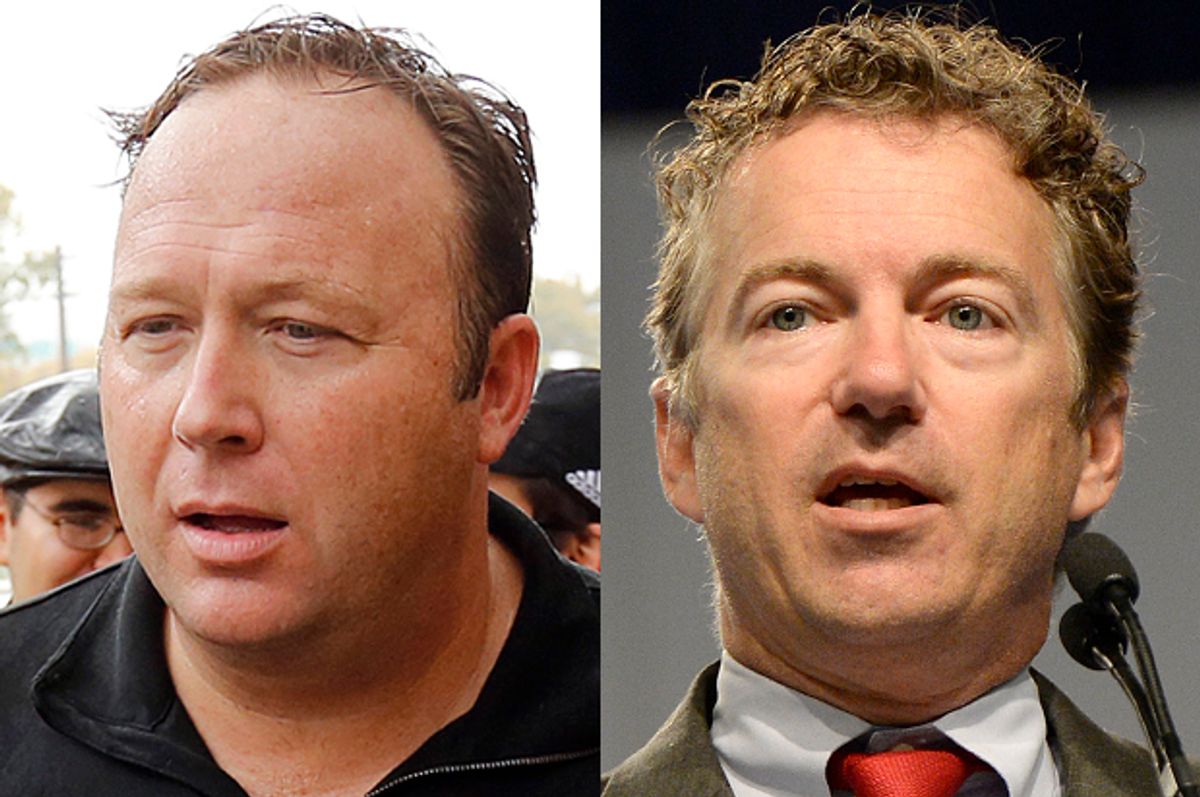 Google's algorithm is a mysterious and capricious overlord, so by the time you read this piece the results may have changed, but here's what I just got when I searched for "Rand Paul" and "Ebola" to learn more about the senator's controversial Thursday remarks. Note the very first result: For those lucky enough not to know, Infowars is part of the media empire presided over by radio host and conspiracy theory connoisseur Alex Jones. Along with Infowars, his radio show and a few other conspiracy-focused websites, Jones is responsible for some of the ugliest, dumbest and silliest moments in our recent political history. Whether it's claiming the U.S. government secretly perpetrated the mass killings in Aurora and Sandy Hook, or insisting that immigrants were engaged in a massive plot to enslave home-grown Americans, if you can think of a moment from the last few years when you began to doubt that humans were truly capable of rational self-government, Alex Jones was probably to blame.

Putting it lightly, Jones is not quite the type of person you'd expect to associate with a mainstream politician, much less one with serious plans to be the Republican Party's presidential nominee. Then again, the Kentucky senator and his devoted supporters are well-known for telling us how Rand Paul is not like a normal politician. The implication, of course, is that this is a good thing. Often it is. But as his Ebola comments — which were rather consistent with other previous Jones-like statements — reminded us, sometimes it's definitely not.

To be fair, nothing Paul said about Ebola rises to  Alex Jones's level of believing the government is responsible for tornados or that Michelle Obama is transgender. I'm happy to concede that to the senator, even if it's really not so much. In one Thursday interview on right-wing radio (he doesn't do many other kinds of media, not after inadvertently outing himself on MSNBC as a defender of "the right to discriminate") Paul argued that "political correctness" — which presumably means a desire not to fall prey to racist tropes about dirty, uncivilized Africans — was causing the Obama administration to undersell the Ebola threat. "It's a big mistake to downplay [this]," Paul told Laura Ingraham. "This could get beyond our control."

Later that same day, Paul returned to the idea that President Obama was consciously putting lives at risk due to the PC police, telling Glenn Beck  — who's not only a big fan of Paul's but is fond of a conspiracy theory or two himself — that he worried "political correctness has caused us to underplay the threat." The U.S. southern border, Paul explained, "is not only a danger for national security purposes, it is also a danger for a world-wide pandemic, should it occur." This was perhaps Paul's deftest nod toward the Alex Jones fringe, combining as it did two of that community's pet obsessions: the fear of foreigners and the belief that our border with Mexico is essentially unprotected.

Paul's Ebola scaremongering got some tut-tuts from the media, but I doubt anyone familiar with his career was remotely surprised. Paul's fringe streak used to get a bit more attention, back when Paul was seen as more of an outsider, before he had arrived in the Senate and become the mainstream media's favorite Republican not named John McCain. But ever since he successfully won over at least a handful of GOP establishment figures (i.e., hyper-wealthy donors) much of the political press has fallen in line and begun treating him like a serious person. If they'd take just a cursory look at some of his recent declarations — many of which he made during his first few years in the Senate — they'd understand that he is not.

What kind of statements? How about the time he warned supporters that the UN was coming to take their guns; or the time he implied the Department of Education was trying to brainwash children into not being homophobic. What about when he warned that a secret plot to create a "NAFTA superhighway" as a step toward one-world government was afoot; or what about my personal favorite, when he tweeted a link warning that the National Weather Service was surreptitiously stocking-up guns? (And let's not even get into the many theories of Dr. Greg Brannon, a man Rand Paul endorsed to join him in the Senate.)

On that last one, about the National Weather Service, I'll leave a parting note. The tweet, which is still online, takes you to a website that's got all the dirt on this latest phantom threat. That website is Infowars — the perfect source of information for Rand Paul, the Alex Jones of the United States Senate.