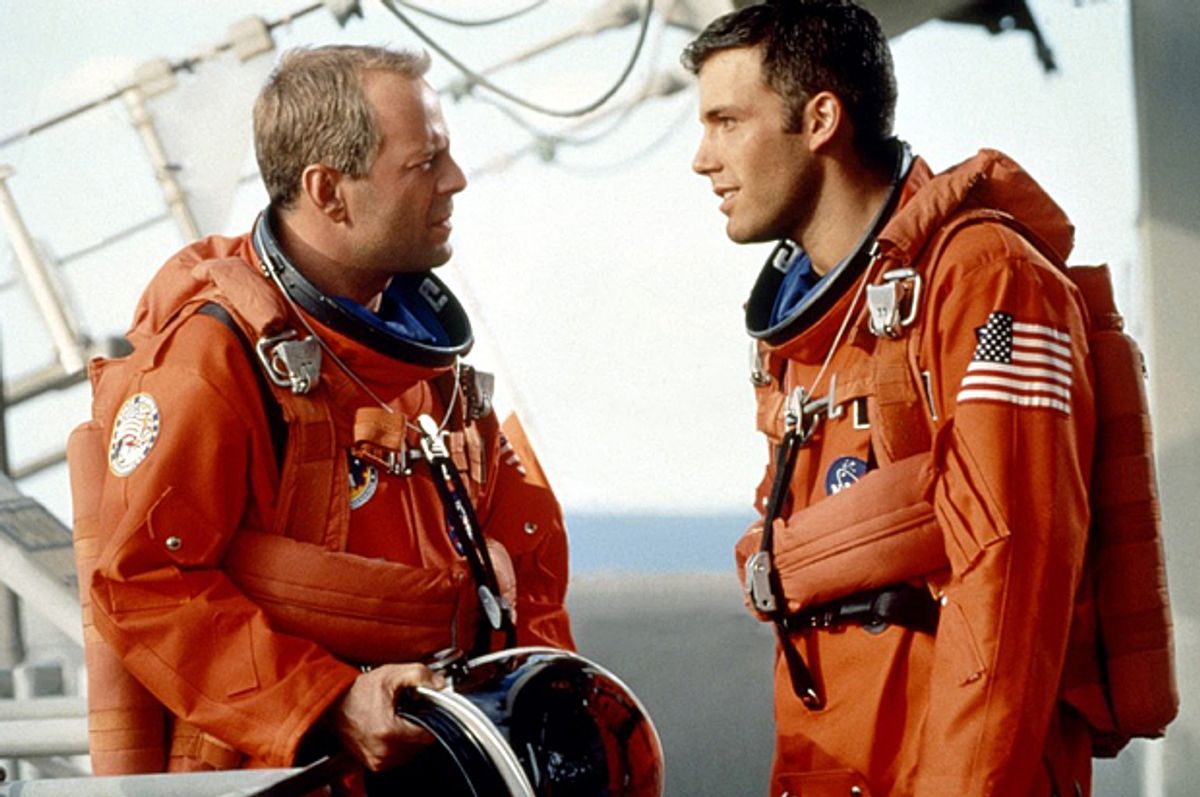 The U.S. was planning on disassembling a number of its old nuclear weapons, but has decided to keep some of them around just in case. In case of asteroids.

Let's all do a collective double-take at this bit of information, discovered buried deep in a report from the Government Accountability Office on the National Nuclear Security Administration. These old warheads, an “irreplaceable national asset,” per the report, "are being retained in an indeterminate state pending a senior-level government evaluation of their use in planetary defense against earthbound asteroids."

"Government officials and space scientists say we aren't anywhere near a real-life replay of 'Armageddon,' the 1998 science-fiction extravaganza in which actor Bruce Willis and friends used a nuclear weapon to smash apart a giant asteroid hurtling toward Earth," the Wall Street Journal informs us. Guessing that's a relief for Bruce Willis. It continues:

While hundreds of asteroids with a diameter of about a kilometer or bigger—the size that could "produce global devastation," according to a 2010 National Research Council report—pass relatively near the Earth's orbit, none are expected to be a worry for at least 100 years and probably much longer, they say.

However, while no such mega-space rocks are on the horizon, an estimated 100,000 or more asteroids at least 50 meters in size also pass through Earth's neighborhood, said Lindley Johnson, a program executive at the National Aeronautics and Space Administration who oversees the effort to find such "near-earth objects." Probably no more than 5% of those objects have been catalogued so far, he said.

If a 100-meter-wide asteroid hit Washington, D.C., for instance, it "could wipe out everything inside the Beltway," Mr. Johnson said.

Plus, we can't forget what happened when a giant space rock did make contact with Earth, about 65 million years ago. The dinosaurs didn't have nukes, and now we no longer have dinosaurs.

In other words, an asteroid strike, while rare, is a legitimate threat. And according to one expert consulted by the WSJ, if a large enough asteroid arrived on short enough notice, it's conceivable that nuking it would our "only option."

What makes the United States' back-up plan a little less reassuring, though, is that some aren't convinced we have a handle on that other thing that threatens to wipe out giant chunks of human civilization.

Journalist Eric Schlosser wrote an entire book about the near-misses and almost-catastrophes that have plagued America's nuclear program. "The bottom line is that as long as there are nuclear weapons, there will be a risk, however small, that one of them is going to go off by mistake," he told Salon last year. "My research for the book," he added, "has persuaded me that we’re just not up to controlling this technology."