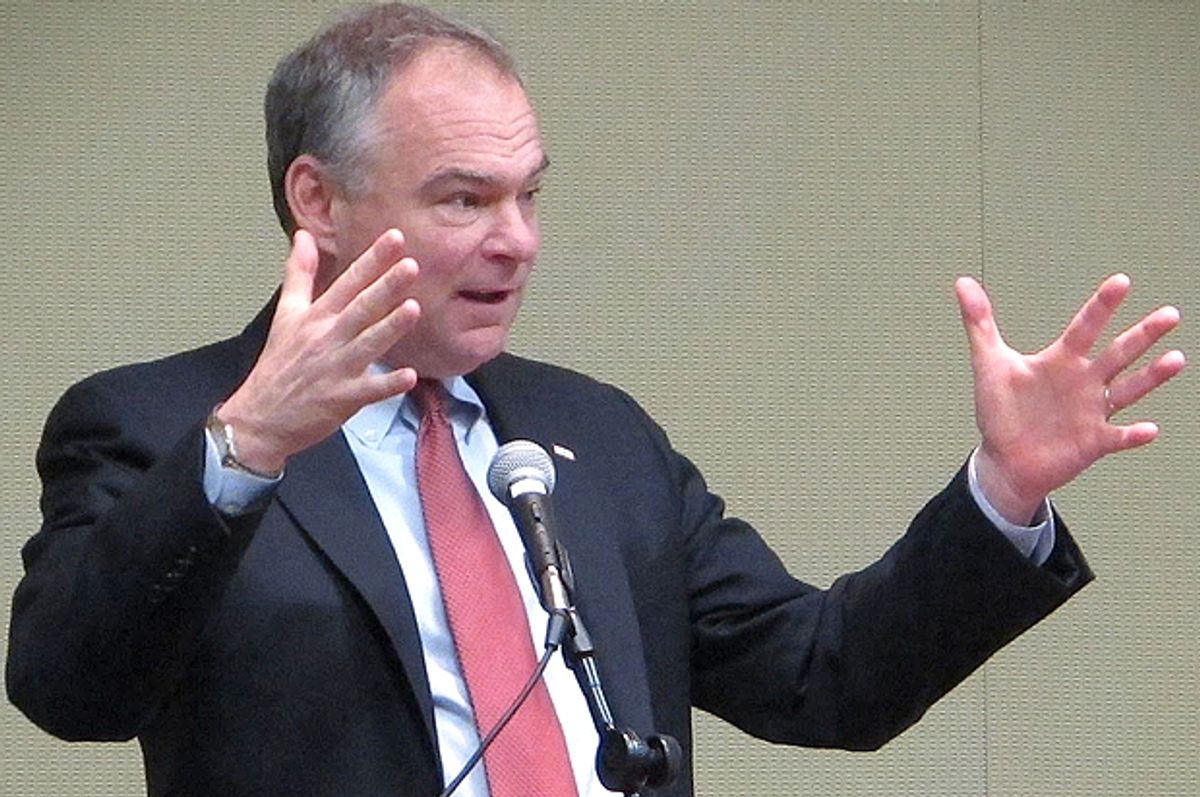 Sen. Tim Kaine of Virginia, an early supporter of then-Sen. Barack Obama’s 2008 presidential campaign whom Obama selected to lead the Democratic National Committee from 2009 to 2011, is now chastising the administration over its handling of the air war in Iraq and Syria, saying that it's “immoral" to launch a military campaign without congressional authorization.

Even before President Obama expanded U.S. air strikes against the Islamic State (ISIS) militant group from Iraq into Syria last month, Kaine emerged as one of the most outspoken advocates for a congressional vote on U.S. action against ISIS.

But even as the air war against ISIS continues, a vote won’t occur until after the midterm elections at the earliest. And there’s no indication that the administration has any plans to request an authorization vote; the White House asserts that the 2001 Authorization for the Use of Military Force (AUMF), passed in the aftermath of the 9/11 attacks to authorize action against al-Qaeda, provides sufficient basis for its war against ISIS.

Coming from a president who previously backed the repeal of AUMF, it’s an ironic position to hold, to put it charitably. And in a New York Times piece today on Kaine’s demand for congressional authorization, the senator minced no words in assailing the administration's position.

“I could not disagree more,” Kaine told the Times, referring to those who don’t think a new authorization vote is urgently required. “[Y]ou don’t ask people to sacrifice their lives until the nation has debated and committed to the mission. It’s immoral.”

The Times’ piece frames Kaine’s break with the administration as one that’s rooted in the Virginian’s abiding concern for constitutional process. In terms of the actual policy, Kaine has signaled that he’d be open to supporting the military campaign against ISIS. He backed the administration’s request last month to arm and train the so-called moderate Syrian rebels, and in urging a congressional vote on military action, Kaine has called on the administration to present “clear objectives and scope of mission to combat the [ISIS] threat.”

While Kaine’s fierce criticism of the administration is notable given his close relationship with the president, he’s not the only traditional Obama ally to chastise the White House for its failure to seek congressional approval of the air strikes. The New York Times editorial board last month issued a blistering editorial arguing that “[i]n the absence of public understanding or discussion and a coherent plan, the strikes in Syria were a bad decision,” and Kaine’s call for a vote has been echoed by Sen. Martin Heinrich of New Mexico and officials at the Obama-allied Center for American Progress.