A message to American media: Stop spreading Ebola fear and start being ashamed

West Africa is crumbling and American media is worried about politics... Seriously? 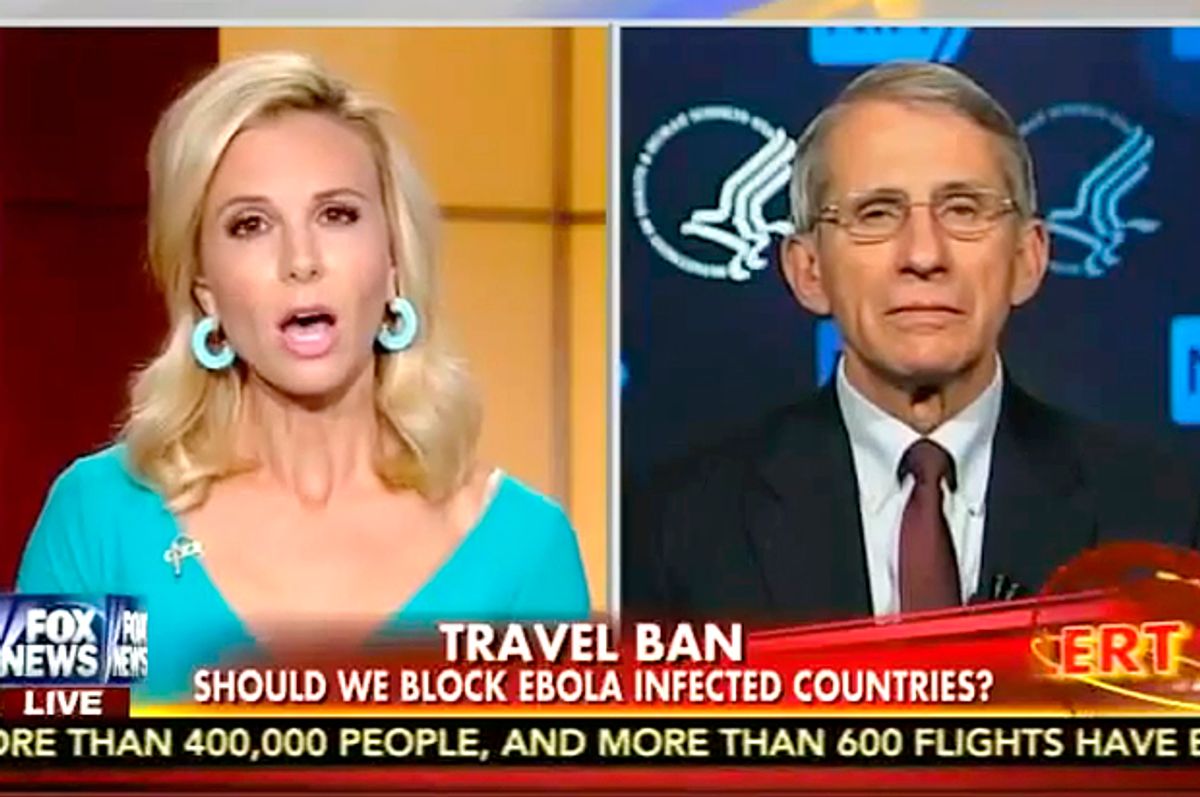 For all the coverage that the Ebola virus has received in the mainstream media, relatively little of it has been devoted to the region that is actually being pummeled by the disease. Instead, networks and pundits have chosen to focus on the political and sensational aspects of the virus' journey to the United States: Why didn't Obama seal our borders? Would a Republican president have made sure no American was infected? Are we all doomed?

Fox News host Elisabeth Hasselbeck has become the network's resident fear-monger by repeatedly asking expert guests why they aren't more freaked out. On Monday, Hasselbeck asked Dr. Anthony Fauci, the Director of the National Institute of Allergies and Infectious Diseases at the National Institutes of Health why he disagreed with a "closing of our borders."

"Why are we still letting people into the country who could have possibly been exposed?" she asked. "Why not just shut down the flights and secure the borders? ... Why not, just as a precaution until we get things under control, seal off the border temporarily?"

Fauci said the proposal made no sense, especially because a travel ban would prevent the region from receiving necessary aid. "If we completely isolate them -- don't let anything in, don't let anything out -- we know from experience with public health, that marginalizes them," he explained. "You could have civil unrest, governments could fall. And then you wind up having spread the virus to other countries in West Africa, which would only compound the problem."

Hasselbeck pressed Dr. Fauci even more. What about a partial closing of our borders? What about restricting commercial flights?

"You have Americans there, you have business people there, people of dual citizenship who have to go back and forth," Fauci responded. "It's completely impractical."

Some might argue that Hasselbeck is merely asking questions, as all journalists should. But the questions that she has asked are pointed in their alarmist attitude and leading at best. If Hasselbeck is worried about these things, many viewers undoubtedly think, they should be too.

But it's not just the media. Politicians are also getting in on the game. Another instance of horrendous misinformation came when the former general counsel and executive director of the South Carolina Republican Party Todd Kincannon recently recommended the swift execution of any person infected with Ebola. The suggestion is especially heinous given that only about half of all those infected die, but also represents the broader trend that public figures feel they can weigh in on a public health issue with no knowledge of public health. (Oh, and by the way, Kincannon is a strict pro-lifer.)

Not only is this a suggestion of mass murder, it is also totally misinformed because you can still easily contract Ebola from a dead person... even one that Kincannon selflessly killed to save an American life.

Here is the situation: only one infected person has made it onto American soil. Meanwhile, West Africa is perishing under the extraordinary weight of an unrelenting disease. Sierra Leone, one of the latest countries to see the infection, recently recorded 121 deaths and 81 new cases in a single day. Overall, the World Health Organization has the death toll at least at 3,439, while a total of 7,492 cases have been recorded in West Africa.

The outbreak has all but destroyed the fragile health-care systems in these countries. In Liberia, citizens are now dying of totally preventable and treatable diseases, because there are no resources left over for them. Burial teams dressed in protective suits spend their days hauling away rotting, infected corpses lining the streets in Guinea, Liberia and Sierra Leone. Thousands of orphaned children are ostracized, living in UNICEF tents--no one wants to care for a child who might kill them. According to the Washington Post, each infected person in the region is infecting two more, and the job of health officials is now to reverse that math. In other words, hell is real; it's in West Africa.

Meanwhile, Americans have gone into full-on panic mode. President Barack Obama has just recently ordered 3,000 military personnel to West Africa to help quell the epidemic, while conservative (and liberal) pundits lament his decision to expose Americans to the disease.

Even before the first U.S. Ebola case, four in 10 adults were concerned about the possibility of a large-scale outbreak of the disease in America, according to a Harvard poll conducted in August. The concern is probably fueled in part by a widespread lack of knowledge about Ebola: Nearly 70 percent of Americans incorrectly believe the virus spreads "easily," and a third of Americans believe (incorrectly) that there is an effective treatment for Ebola. Twenty-six percent of Americans are concerned that they or one of their loved ones will get Ebola within the next year.

It's time for some tough love, since no one else seems willing to give it: Buck up, American public figures. You are not going to get Ebola, and you are at best gravely misinformed for thinking otherwise. Actual people are dying by the thousands. The health care infrastructure of one of the most vulnerable regions in the world is destroyed. Children walk to school through streets lined with infectious corpses and you are worried about closing our borders? How dare you, Americans? Aren't we supposed to have triumphed over our selfish animal instincts? Have one ounce of sympathy, you sheltered children.

You can help relief efforts by donating to any of the organizations listed here.