Alt-lit is not so "alt": How the alternative literature community failed women

As a participant in the alt-lit scene for the past couple of years, I've been horrified by what I've seen 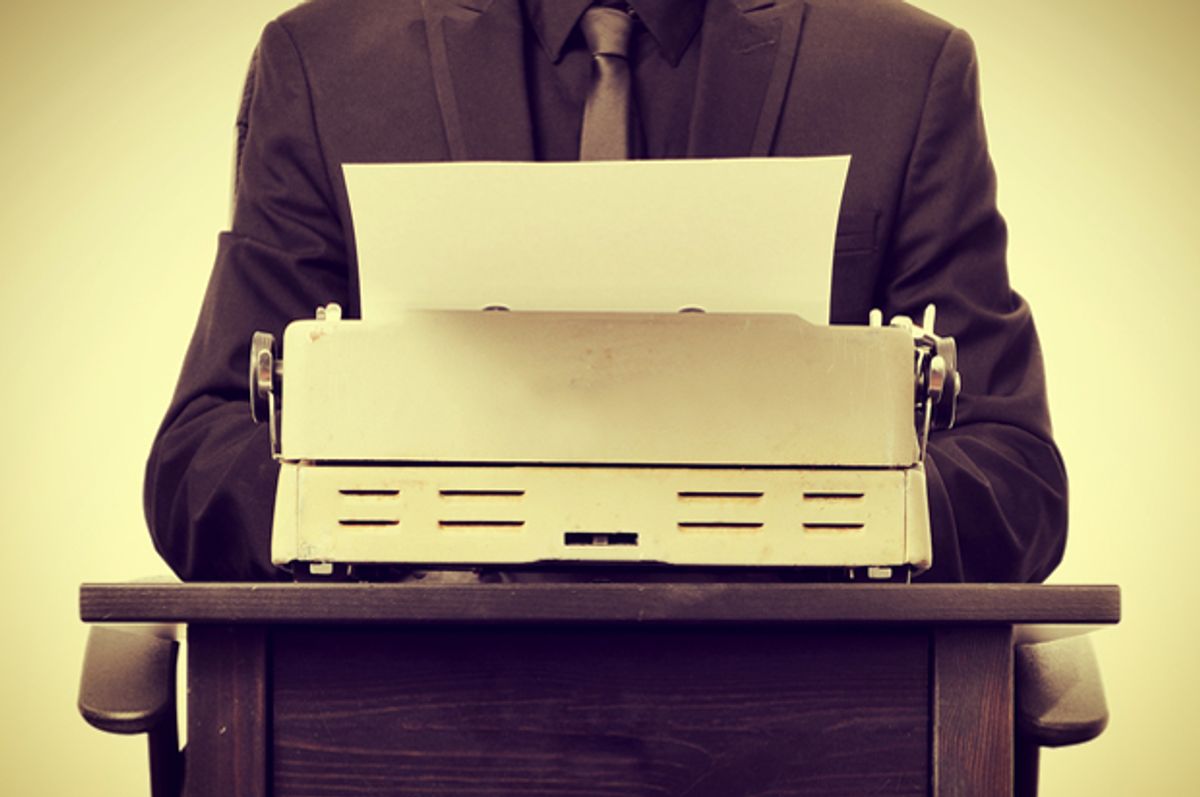 "If you're not one of the ... tokens or a girl Alt Lit bros deem attractive, then your work will likely be slept on or tokenized."    Safy-Hallan Farah

We know that "Alt Lit" means "alternative literature." But what is that, exactly? In a piece for Gawker about the recent sexual assault accusations in the Alt Lit community, Allie Jones described Alt Lit as “hip, youthful, awkward, and uncomfortably self-aware.” Writing for VICE, Josh Spiker says of the genre, “it’s fiction, it’s poetry, it’s both. It’s changing, it’s living, it’s growing. It’s here.” And in The New Yorker, Kenneth Goldsmith referred to its participants as having “produced a body of distinctive literature marked by direct speech, expressions of aching desire, and wide-eyed sincerity.”

But as a peripheral participant in the Alt Lit scene for the past two years, I don’t agree with any of these assessments. Instead, I see a “boys’ club,” to quote Safy-Hallan Farrah, whose main stylistic tropes are little more than a reproduction of--to use a term that's been beaten to intellectual death but still feels inevitable here--the canonical, heterosexual white male gaze.

This month, the Alt Lit community outed two influential gatekeepers as alleged rapists: Janey Smith/Steven Trull of Plain Wrap Press and Stephen Tully Dierks of Pop Serial. When I first publicly criticized the misogynistic tropes in the Alt Lit world, some people claimed that I was diminishing the “agency” of the female characters the male authors had written. But, in light of recent events, my feeling is that this “agency” was more like a protective fiction that apologists deployed under cover of “free speech.” Dierks’s outing has been met with community support and internet media visibility, as the Gawker article shows, whereas Smith/Trull’s outing was met with bafflement, vitriol, and victim-blaming. And the Alt Lit scene berated Safy-Hallan Farrah last year when she claimed that the publishing dynamics at Pop Serial were sexist.

While these allegations are distinct, they are also couched in a shared literary and cultural context. These and other predatory men were Alt Lit gatekeepers. The Alt Lit community and its silence enabled the creation of a dangerously hostile space. Many attributed the novelty of Calloway’s story “Jeremy Lin”  to the fact that the publisher in the story was interested in her work and not in having sex with her, in contrast to the norm.

So what exactly about these men, their voices, these spaces, is “alt”? How is this distinct from the publishing world at large? Furthermore, why is it that these men are synonymous with the scene, as opposed to the myriad of active women and trans writers, such as Alexandra Naughton, Mira Gonzalez, Ana Carrete, Joshua Jennifer Espinoza, Marie Calloway, Melissa Broder, Manuel Arturo Abreu, and Jos Charles, among others? This demonstrates that the titular “alternative” is little more than a veneer, with male Alt Lit players, to paraphrase Allie Jones, flirting with “gestures towards radicalism and openness” without any actual interest in subversion.

Despite the fact that Tully Dierks, an alleged rapist, has been subjected to an accountability process, it's hard to say that the Alt Lit world has taken steps toward self-awareness that could constitute “progress.” The stark divergence between the reception of the Tully Dierks controversy and its precedent surrounding Smith/Trull is evidence of this. In September, I learned of the Plain Wrap Press chapbook “We’re Fucked,” written by peterbd and prefaced by Janey Smith/Steven Trull. This was an extrapolation of a previous Smith/Trull article, his now-infamous “Fuck List: A List of Writers I Want to Fuck (Or Get Fucked By),” published on HTMLGiant.

Every likeness included on that list is reimagined in the book—Smith/Trull refers to it in his preface as the “Fuck List come to life”—as a graphic sexual encounter of Smith/Trull, who did not seek consent to use legal names and likenesses. It remains unclear as to whether or not every person has been informed of their involvement. Heather Watson, the principal editor and founder of Plain Wrap, agreed to rescind the book on September 4th, but was dismissive of the backlash, calling the book a “celebration.” It's significant that many of those implicated were women and trans people, already victims of cultural objectification and marginalization.

After “We’re Fucked” was revealed, and perhaps most strikingly, Alexandra Naughton released an account of her abuse, causing others with similar experiences to come forward. Yet neither Naughton nor I—ultimately, nor anyone else victimized by Smith/Trull in the Fuck List/“We’re Fucked” or elsewhere—were vocally supported by the community. This is the sad reality for the majority of abuse survivors: silencing that is both explicit and implicit, leaving us to weigh the risk and reward of coming forward within an unreliable community.

As a trans and non-binary survivor of sexual violence, I do not feel any better or any safer when I see a heterosexual white man marking the posts of survivors as “important,” or lamenting the horrors embedded in our reality. A male acquaintance of mine recently commented on one of my articles, stating, “I would say ‘I can imagine,’ but I don’t know if I can,” calling the circumstance “outrageous.” But there is nothing “outrageous” about this—it is commonplace, sublimated, horrifying all the same, but nonetheless the world we live in— the world that men like Dierks and Smith/Trull, and communities like Alt Lit, perpetuate.

Stephen Tully Dierks and I actually once had a conversation about art, in which he told me that I should stop “politicizing” it. But I would say that art is already politicized, wielded too often to justify the domineering voice of the empowered. Alt Lit, as characterized by its male figureheads, is not so alternative at all.