Faced with proving their love to an immigrations official, they designed a device that could prove it for them 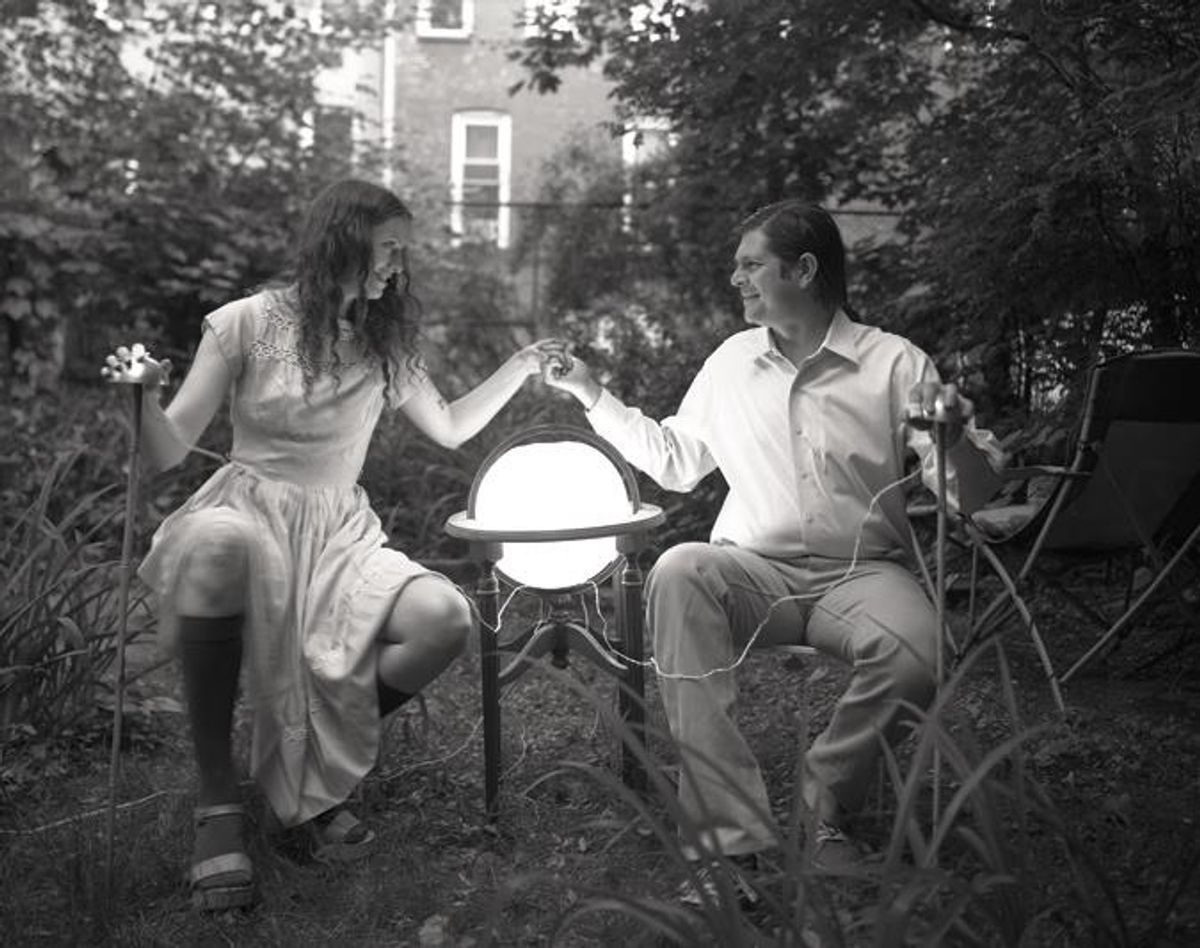 Typically, we think of a "love machine" as a man who gets around or is an especially good lay. But Ashley Clark and Matej Vakula had a very different vision in mind: an actual machine that can measure love -- and they say they've succeeded in creating it. Before you go alerting the scientific presses, know that Clark and Vakula, who collaborate under the moniker Clakula, are artists. Like artiiiiiiste artists who make conceptual, metaphoric, minimalist films with a family-heirloom Super 8 camera. The wonderfully surprising thing about them is that their "love machine" is actually, dare I say, brilliant -- more on that later -- and the story behind its creation is pretty fantastic.

Vakula is from Slovakia and Clark is American. After falling in love and getting married, he had to wait more than two years before he could apply for a Green Card. In that time, they visited each other and researched what it would take for him to become an American citizen. That's when they learned that they would have to prove their love to an immigration official. So they began creating art that documented their relationship and commented on their circumstances -- for example, a bizarre Super 8 video of the two of them licking either side of a jar of honey in a nod to a Slovak saying about having honey but not being able to taste it. They created paintings of their twice-daily Skype conversations.

And, ultimately, they created the aforementioned steampunk-esque machine. It's the sort of thing you would expect to see at a Victorian game arcade, what with its wood pedestal, glowing spherical center and collection of mysterious wires. It would beckon even the most skeptical among us to give it a try -- unless, that is, one is afraid of having one's love revealed as a sham -- and therein lies its genius. Although they do claim that the machine itself is "real," and that it isn't just about the response it inspires in people.

I spoke with Vakula from his new home in Brooklyn about long-distance relationships, immigration and what it means to measure love.

How did you two meet?

We were classmates in Boston at a graduate program at Massachusetts College of Art and Design and we started to date, and then later on toward the end of the grad program we got married. Around that time we started to collaborate. We got married in January of 2011 and six months later I had to leave the country for two years, because of weird Visa requirements. We thought, "If we have to be separated, let's do art that will keep us together."

What is the basic idea behind the project?

The concept just organically grew from our relationship, because we are both artists and we are a couple, so we said why not try to collaborate together and why not somehow utilize our relationship and question it and the circumstances we are in.

Have you gotten your green card now?

I just got my green card two months ago.

Up until that point you were forced to live apart?

So you spent several years going back and forth and spending time apart.

Yes, exactly, since the summer of 2011. I had to stay in my country for more than two years. During that time I visited her four times. One time it was for two months, but otherwise it was for two weeks. She visited me about the same number of times. It was always just for a week or two. She had a student debt of more than 100,000 dollars that she has to pay off in the U.S., so she could not actually come and live with me in Slovakia, and I could not afford to travel that often.

We started to do art about the moments when we were together, with the resources available to us. There was a time at the beginning where we could not even afford to buy a digital camera or cellphone with a camera. We started using my father's old Russian super-8 camera to shoot our videos. All of the videos came out of our life and thoughts and sometimes our celebrations.

How did you survive that time apart?

It was hard. It was very hard. We spent a lot of time on Skype, like two times a day for one hour each. It was difficult because there is a six hour time difference between the east coast of the United States and Europe, so I had to stay up until 1 a.m. until she finished work. We're thankful to new technologies for that. Otherwise, I don't know. Many of our pieces of art came out of these Skype conversations and our online relationship. There are some paintings we did that depict our Skype screenshots, including some glitches and things like that.

You were trying to deal with the idea of having to measure love, and that was because you had to prove your love in order for your to get a green card, right?

We were going through what you need to do for a green card and we saw this kind of weird element that you have to present proof that you love each other in front of an immigration officer. And that immigration officer has to actually approve that you love each other and that you're a real couple, which is really strange. It's kind of Kafka-esque. What is the criteria for this? I know they have this because they want to eliminate fake marriages, but in general it's probably impossible to check this. It causes struggles for people who really love each other. Everybody has to somehow prove that you love each other. You have to show photographs. There are weird questions about your relationships and the telephone number of your spouse and all of these things. We considered it very surreal, so we tried to make art out of it.

From this came the idea to give the proof of our love. We went so far as acting saying, "Let's create some kind of device that could measure love." For an officer, the best way to prove love is to have some measuring device showing that, "Oh look, this LED is blinking, so it means they love each other!" We designed and built that love measuring machine, which, actually, it's kind of complicated. It measures the heartbeats of the couple and measures their love. There is a ... special mechanism we figured out on how to measure love. I had to use two computers, because one cannot handle that amount of data. (Laughs.)

Did you bring any of this stuff when you had your green card interview?

We presented a lot of photographs. We had a huge box full of photographs. Part of it was also our art. They did look at some of the photographs, but they really just quickly ran through it. So it was a little disappointing.

Can you walk me through the thinking behind a particular piece?

One of the first videos we did was a Super 8 video called "The Obstacle" and that video was shot in Slovakia. In some places, there are these remains of the Second World War, so we found this huge concrete cubes on the road which are taller than a human -- they were road blocks against tanks. We decided to go through them and help each other to get on top of them. So the video as about helping each other through some obstacles, and it had this historyical layer too.

I saw one video that you did where you guys were on Skype and you both just silently watched each other.

That's shot in the middle of that time that we could not be together. The situation of not being able to be together really deeply influenced us. Ashley was crying a lot, almost every day. It was very hard for our mental health. We did that in the middle of that, so we were just silently looking at eachother. Something minimal that could bear a lot of weight.

It's really sweet. It's silent with very little movement, but then there are the surprising, brief moments where she smiles at you. Did you learn anything about your relationship through doing this project?

A lot.We are still learning. It's kind of difficult for us to distinguish between the relationship and the project. The project is about the relationship, but it really influenced it because art is our life. It's kind of full circle. We think about patience a lot, we think about other people a lot -- we know there are worse cases with immigration than us. We got to know each other better, in a way we are still getting to know each other better, because I've only been living in the US since last September. We kind of consider it just a year of really being together. This was a huge test. I believe that most relationships would break right away. It's really amazing.

You were able to wait to be together.

Exactly. But it's not only about waiting. We are continuing our collaboration now, we are figuring out how to survive. Still, we have really big financial trouble because of her student debt and because I am a new immigrant and don't have a job yet. We are trying to live off of less than 200 dollars, both of us, per week.

After doing all of this, did you come up with an idea of how you really can measure love?

Well, in a way yes. We think that, a little bit more than metaphorically, this device work. The fact that you as a viewer are standing in front of this machine and you have to make a decision to actually show your love, the level of your love, sometimes people don't like to do that. The machine is more about this moment, are you ready to show your love? Will it work? Maybe 80 percent of people who approach this machine say they like it, but the rest are afraid to use it. Some people told me that they are afraid that it will expose that they don't love the other person that much. They don't know what will happen, they don't know if the machine will actually show the love and how much of that love it will show. So if it shows the love at the end, and it mostly does, they are really happy.

Have you had people try it and then it doesn't show their love and they're disappointed?

Sometimes it doesn't! It shows multiple levels, so sometimes it doesn't show that much love. It all depends on your personal contact with the other person. I can't reveal that much. It has to do with the human body and electricity. It might sound like one of those weirdo devices from the turn of the century, and we kind of agree. It is a fake device in some ways, but it is not in another way. I would like to keep it foggy for people. But it is not completely fake, actually.

It seems like a big part of its importance is how people react to it.

That's the most important thing. That is kind of what the machine is measuring.