We now live in a world with KFC-sponsored manholes and McDonalds-issued report cards. Here's why it's killing us 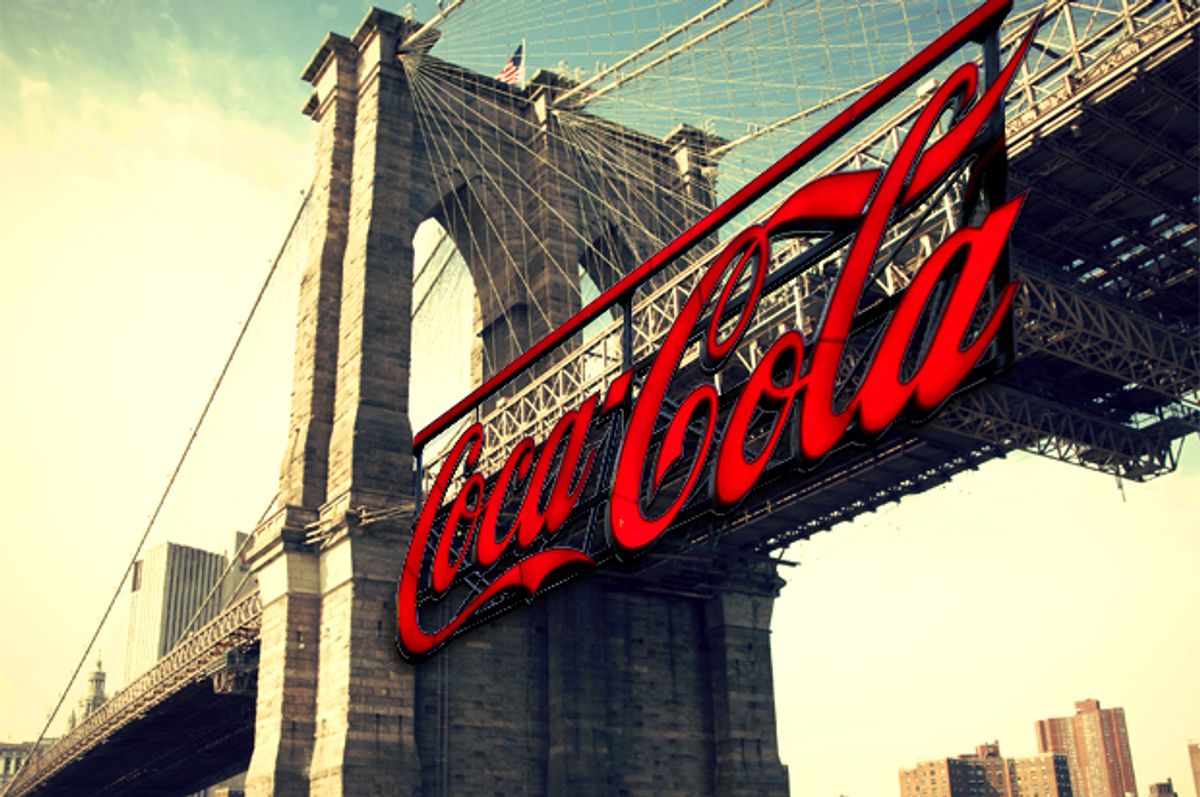 For the past 20 years, I’ve been taking the train to the Market East Station in my hometown of Philadelphia. But I’m not going to be doing that again anytime soon.

That’s because Market East no longer exists, at least not officially. It became Jefferson Station earlier this month, after Thomas Jefferson University Hospital paid Philadelphia’s regional transportation authority $4 million to put Jefferson’s name on the station for the next five years.

And this isn't just a Philly thing, either. Around the country, the names of our public spaces are being sold off to private donors. Brooklyn's busy Atlantic Avenue subway station is now the Barclays Bank station; Chicago is selling naming rights to its "L" stops; and Cleveland recently named an entire bus route "The Health Line," after receiving $6.25 million from the Cleveland Clinic and University Hospitals.

In several other cities, meanwhile, Kentucky Fried Chicken's logo festoons manhole covers and fire hydrants. A few municipalities have sold ads on their police cars. And seven states now allow pizza chains and other companies to advertise on school buses.

That's good news for business, which can engage old customers and target new ones. And it's good for our cash-strapped local and state governments, which can make long-needed improvements to crumbling infrastructures. Everyone walks away happy. Right?

Wrong. Our public spaces communicate important lessons about who we are. By selling these spaces to private interests, we teach our children — and ourselves — that nothing is truly shared; that everything is for sale, typically to the highest bidder; and that the clutter of commercial messages is the price we have to pay to sustain our common lives.

Of course, America’s urban landscape has long been littered with garish advertising. Writing in 1914, journalist Walter Lippmann bemoaned “the deceptive clamor that disfigures the scenery, covers fences, plasters the city, and blinks and winks at you through the night.” Parts of the sky were “ablaze with chewing gum,” Lippmann quipped, while the rest was “brilliant with monstrously flirtatious women.”

On the countryside, meanwhile, tobacco companies paid farmers to place ads on their barns. As automobile sales and traffic increased, America’s highways became jammed with signs and billboards for every product under the sun.

But it’s one thing to sell advertisements on a road; it’s another to sell the the road itself. Two years ago, Virginia became the first state to offer naming rights for its bridges, highways and roads.

“You’re stuck on a highway, you’re sitting, and all you can do is look at the sign that says ‘Tostitos Bridge’ or ‘The Coca-Cola Overpass,'” one brand-building consultant enthused about the Virginia experiment. “Repeated exposure is so important for brands these days because there is so much clutter.”

She’s right about that. For consumers, however, the new naming-rights trend will accelerate the clutter instead of reducing it. In the past, public spaces provided a brief respite from the pandemonium of private promotions. But not now.

Even state parks and beaches sport ads on nature trails and other facilities. A park is “a very quiet marketing environment,” explained the CEO of Government Solutions Group, which brokers deals between parks and sponsors. “It’s a great place to reach people; they’re in the right state of mind.”

Or marketers can go straight to the institution charged with shaping young minds: our public schools. Thus far, no school has named its entire operation after a private sponsor. But dozens of high schools have sold naming rights to their football fields, for fees ranging from $100,000 to $1 million. One Massachusetts school even offered naming rights to its principal’s office, for a mere $10,000.

Other schools adorn their walls, floors, locker rooms, and cafeteria tables with ads for candy, soda, and fast food. One Florida school district issued its report cards in jackets issued by McDonald’s, provoking a public outcry that ended the practice.

Indeed, naming-rights arrangements seem to generate dissent only when the public doesn’t like the product being promoted. So New York Mets fans condemned the team for selling its new stadium’s name to Citigroup, which received billions of dollars in the 2008 bank bailout even as it was cutting over 100,000 jobs. And Florida Atlantic University was forced to cancel a naming deal with a private prison operator — yes, you read that right — after students protested the idea.

But the real problem is selling names in the first place. If we want to improve a road or a school, we should tax ourselves to do it. By delegating the task to a private donor, we erode our shared spaces and the civic sentiments they inspire. A truly public enterprise demonstrates our faith in one another. And a facility papered with advertisements suggests the opposite: that we lack real community, so we need to put ourselves in private hands.

I’ve got nothing against Thomas Jefferson University Hospital. My best friend in Philadelphia works there, and it seems like a terrific institution. But we shouldn’t rechristen an entire train station after it, simply because Jefferson can pay for the privilege. Why must the market rule everything, including the name of Market East?