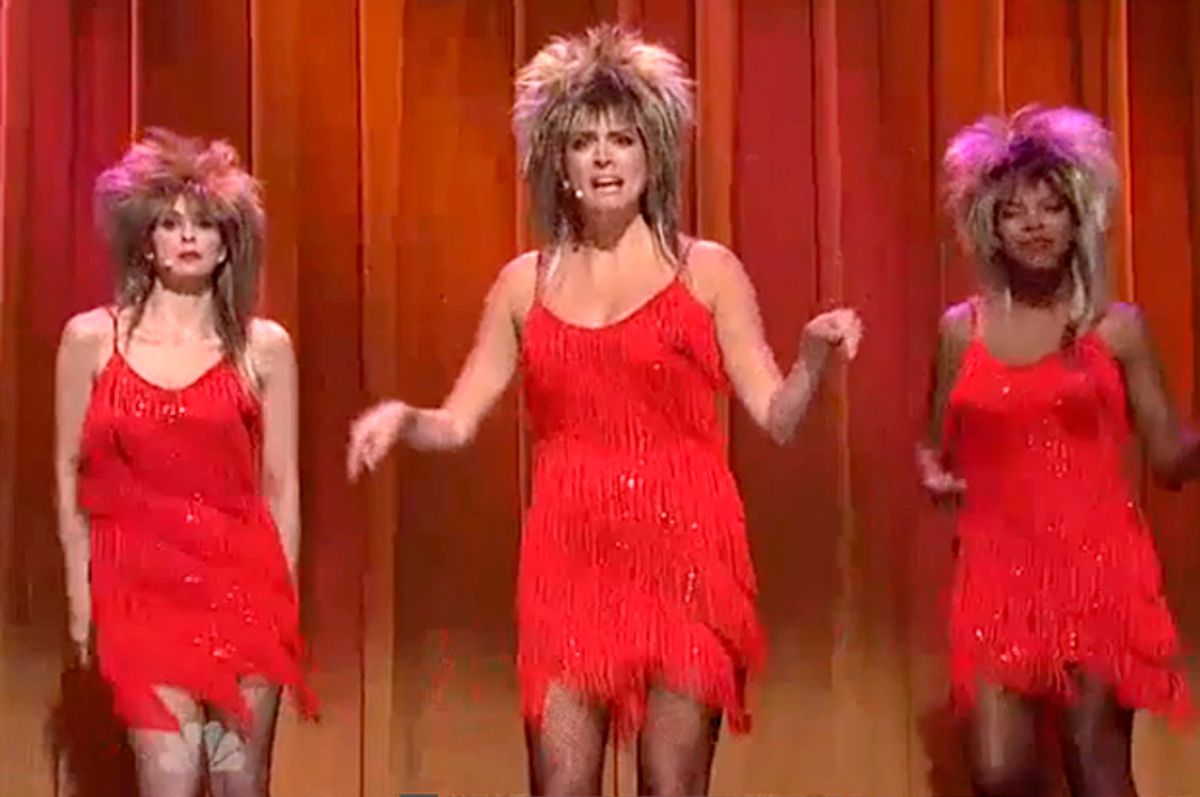 It's not uncommon for comedians (like Tim Heidecker or Bill Maher) to avoid watching popular comedy programs out of a fear that someone else's ideas will end up in their own work. Plagiarism is easy to identify when it's word-for-word, but in the insular world of comedy, where premises are recycled almost daily, the line between inspiration and stealing a joke blurs quickly. The accusations are so common that comedy blog Splitsider put together an advice column in 2011 about how to be able to tell if someone is, in fact, stealing your joke.

It seems, however, that "Saturday Night Live," the most venerated comedy institution on television, may have crossed the line. The program was accused of stealing its Oct. 4 "Proud Mary" sketch from two Groundlings performers, Vanessa Ragland and Kimberly Condict by teacher Ian Gray via a Facebook post. Gray called attention to the similarities between the two sketches and noted that "over the years I have seen MANY, MANY sketches flat out stolen from my friends by Saturday Night Live. Nearly verbatim. Word for word... And everyone in our community goes "Oh man. That sucks." and nobody says anything because I guess 'SNL' is still some dream for some people or they don't want to get involved, or a million other reasonable things that stop people from standing up for each other when things are blatantly wrong."

"Well, enough of that. This is fucked up," he continued. "This is stupid. And we have the means to make people aware of blatant rip-offs of other people's material. It doesn't need to be a witch hunt. It doesn't need to be pointing fingers, assigning blame, or taking sides. But a simple case of what's right and wrong."

The "SNL" sketch, like the Groundlings sketch performed for six weeks this summer, revolves around a Tina Turner tribute band performing interspersed with personal stories that reveal how down and out they are. In the Groundlings sketch, the players mention a riverboat in Nebraska from a past gig. In the "SNL" sketch, they are currently on a riverboat in Nebraska. Both sketches end with the MC's comments. A source close to "SNL," meanwhile, has dismissed the highly specific similarities as simply a common idea over a common premise.

This sketch is not the first that "SNL" is said to have stolen, and it likely won't be the last. But after looking at a brief history of other "SNL" clips said to have been plagiarized, it is among the more serious claims. Here are five other times "SNL" has been accused of lifting material:

In 2004, "SNL" alumn Jay Mohr published "Gasping For Airtime," an autobiographical account of his early 90s "SNL" days in which he admitted plagiarizing one of the few sketches of his that ever aired. He lifted it from comic Rick Shapiro: He finally clean about the stolen sketch a decade after lifting it, but that didn't exactly do Shapiro any favors:

"Tim and Eric Awesome Show" fans are rather protective of comedy gods Tim Heidecker and Eric Wareheim, so when "SNL" aired its "Ladies Who Lunch" sketch in 2010, they launched the #TinyHatsWar on Twitter and accused "SNL" of stealing the idea of wearing a tiny hat within a hat from Tim and Eric's sketch in 2007. The similarity of the two sketches weren't lost on the show's creators, either:

Heidecker dismissed the plagiarism charges by chalking it up to an "influence," telling Vulture: "We understand that we've created something that a lot of people in comedy watch and like, and influences are totally fine."

Splitsider noted, however that "One sketch is about lady’s fashion, the other makes tiny hats into an every-day necessity. The setup, delivery, and conclusion of the jokes were very different, but they both included the same subject. Tiny hats, and tiny hats inside of tiny hats."

Just after the Tim and Eric pseduo-controversy, Splitsider pointed out an "SNL" sketch that really did bare a strong resemblance to another popular sketch. In 2010, Funny or Die mocked Brett Favre's sexting sandal by creating a Wrangler jeans parody ad, "Dickhole Jeans." The video amassed thousands of views in the week leading up to the "SNL" sketch, which debuted an ad parody about Wrangler's "Open Fly" jeans starring Jason Sudeikis as Favre. Here's the original sketch by Funny or Die:

In response, Sean McCarthy over at the Comic's Comic, put together a list of seven other popular sketches with the exact same premise, noting:

When it's an absurd topic, you might have a case to make. When it's the idea that a dying soldier would have terrible choices for his last request to a comrade, well, before you can say Lycos, I went ahead and Googled it. And what do you know? Several comedians and sketch groups already done gone and went there and did that, so Saturday Night Live probably didn't steal your idea so much as not care that your idea also uploaded itself to the Internet.

In 2013, comedian Jim Norton of the "Opie and Anthony" show accused "SNL" of stealing his character Chip Chipperson as inspiration for Daniel Craig's construction guy character and then again the following week with Kenan Thompson.

Fans of "Last Comic Standing" comedian Iliza Shlesinger called out "SNL" in 2013 after they aired a joke about airport boarding zones. While Shlesinger, who has been performing her joke for years, did not come out and accuse the show of plagiarism, she did say on The Schmoes podcast that it was suspicious that "SNL" chose to make such a similar joke about a well-worn subject the same as her album came out. In her opinion, it wasn't likely "parallel development" but a case of "Steal the premise, gut the joke."