The real star of "Gone Girl": Ben Affleck and the art of male full-frontal

"Gone Girl" might be titillating reviewers with a glimpse of Affleck's junk, but these leading men went there first 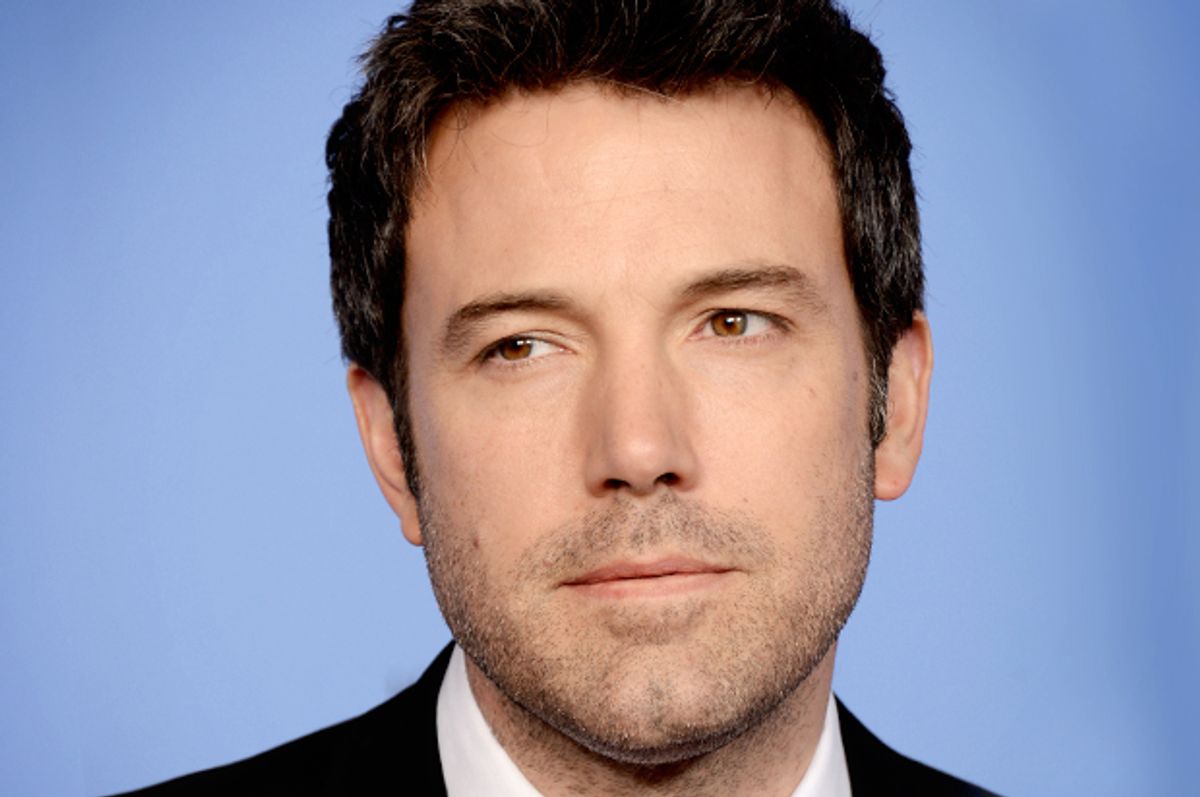 These days, it seems everyone's talking about Ben Affleck's penis' ever-so-brief appearance in the new film "Gone Girl." So much so that you would think he was the first big-time male star to go full-frontal. Far from it, though! Granted, it is all too rare, but  several leading men have come (ugh) before him and, unlike Affleck, some have offered more than a was-that-what-I-thought-it-was glimpse. You know what that means: time for another penis list.

This one often escapes attention because it happened before “Titanic" turned Leonardo DiCaprio into a leading man. You can thank 12-year-old me -- creator of a DiCaprio fan-site and daily newsletter -- for catching the full Leo back in the day. In this film about the tumultuous relationship between French poets Paul Verlaine and Arthur Rimbaud, Dicaprio, playing the latter, climbs naked onto a balcony (around 6:29). Blink and you’ll miss it, but my pubescent self hit rewind, play and pause enough times on that VHS to know that there’s peen there -- and enough to permanently damage the tape (sorry, Blockbuster).

The penis has long, ehem, been a, um, tool for comedy -- from destroying a homemade dessert in “American Pie” to getting caught in Ben Stiller’s zipper in “There's Something About Mary” to masquerading as a tiny mushroom in “The Hangover 3.” But no one has done so as bravely as Jason Segel in “Forgetting Sarah Marshall.” When his character, fresh out of the shower, is unexpectedly dumped by his girlfriend, he drops his bath towel in shock -- and refuses to cover up.

In the 1994 film "Color of Night," Bruce Willis and co-star Jane March get busy in a pool and we get a clear underwater shot of the action star's action figure, if you know what I'm sayin'. It still can't compete with the vision of a bloody and sweaty Willis in a tank top in "Die Hard."

I could probably compile a list solely of Harvey Keitel’s nude scenes, but perhaps his most memorable is in “The Piano,” while naked and cleaning the aforementioned piano -- as one does. Four words: That light, those muscles.

This music video, with its interpretive dance and body painting, is the most annoying, but at least Shia Labeouf is briefly naked in it. It's a de-sexualized, matter-of-fact nudity -- so much so that it almost doesn't even belong on this list. It is just that unremarkable, and that is oddly refreshing.

In this David Cronenberg film, a naked Viggo Mortensen is attacked in a bathhouse by knife-wielding Russian mobsters. There are broken bones, bucket loads of blood and a knife stabbed in an eye. It is incredibly disgusting. But, Viggo Mortensen, you guys.

Tom Hardy has done his fair share of nude scenes, but while playing a prisoner in “Bronson” he is arguably nuder than nude. I'm talking naked prison fights galore. As the blogger Melissa McEwan told her husband after watching the movie, “I saw body parts on him that I'm not sure I've ever seen on you after ten years of marriage."

This isn’t a teasing flash. Michael Fassbender gets out of bed and leisurely strolls to the bathroom, and the camera all the while lingers -- nay, luxuriates -- at crotch-level. Never before has a limp dick inspired such excitement: It prompted George Clooney to joke that Fassbender could play golf with his hands behind his back. Size aside, this scene deserves to be celebrated for this comment alone from Fassbender: “It just baffles me: Women can parade around naked all the time, but the guy conveniently has his pants on. I remember my mom always complaining about that to me, saying, ‘This is such bullshit, it’s always the women who are naked’ … so I did this one for you, Mom!”