Walton family's American rip-off: How a tycoon turned human equality on its head 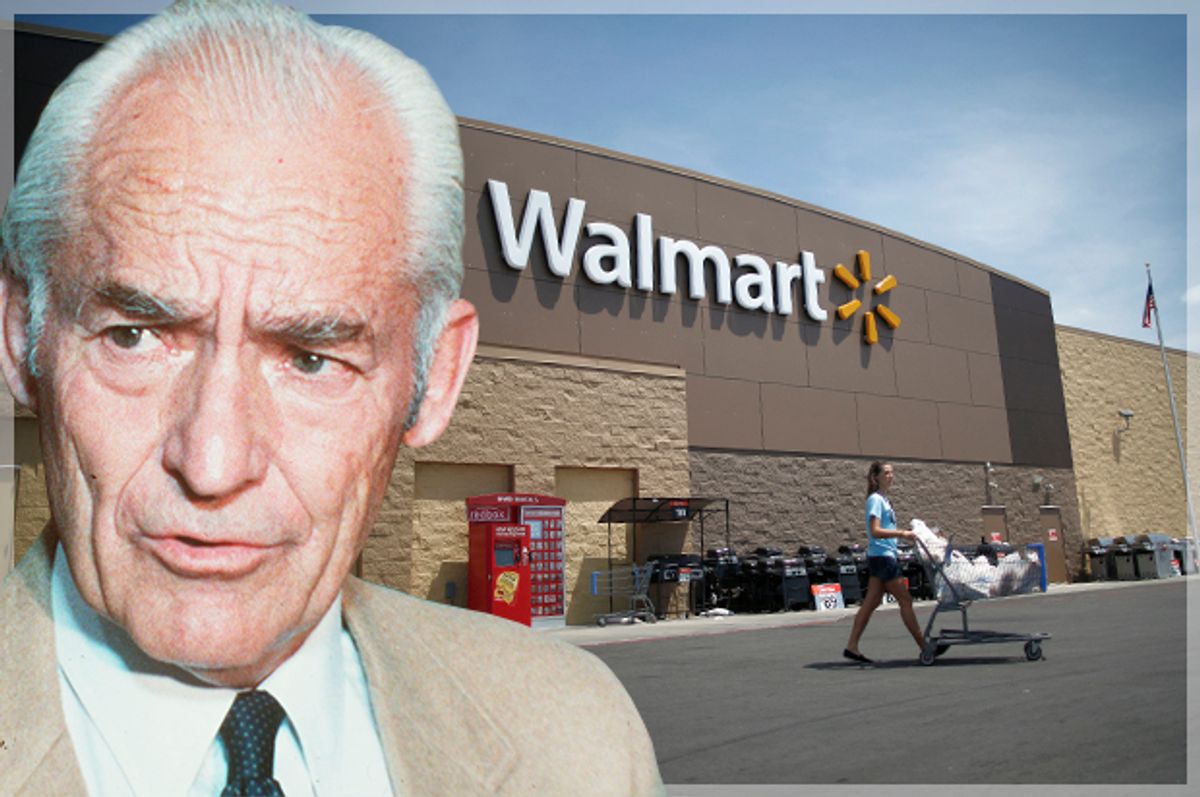 As every school kid knows, part of what makes America the Greatest Nation in the History of the World is its Declaration of Independence, which begins with the immortal, revolutionary assertion that "all men are created equal." Looking back at the last 200+ years of social progress, you've got to admit that in this case (if not many others) Thomas Jefferson was onto something with the whole human equality idea. Sure, he wasn't entirely right — but how can you blame him for not anticipating the transcendent greatness of Sam Walton?

Walton, of course, is the now-deceased founder of Walmart, the global corporate empire/force of nature that's transformed the American economy — and made Walton's progeny unfathomably rich. Indeed, as the latest Economic Policy Institute (EPI) report on how many millions of Americans it takes to equal the Waltons shows, Sam Walton's greatness appears to have been so profound that merely carrying his genes makes his descendants deserving of billions. Or at least that's what our political system seems to believe. Perhaps all Waltons are created unequal.

To get a sense of just how much more equal the Walton clan is than the rest of us, Salon spoke with EPI's research and policy director, Josh Bivens, about the latest numbers comparing the sons and daughters of Sam and millions of Americans' net worth. The figures are pretty unbelievable; but the most surprising thing is that the disparity between the Waltons and the 99 percent may be even greater than it looks. Our conversation is below, and it has been edited for clarity and length.

Can you give me a brief overview of what you found during your most recent foray into the bizarro-world of the Walton family and economic inequality in the U.S. today?

Yeah, so basically, you have two data releases on wealth in America that came out in the past month: The Survey of Consumer Finances, which is done by the Federal Reserve and is the gold standard in, top-to-bottom, what's happening in the American wealth distribution... And then [I] compared that to the Forbes 400.

One of the things that jumps out is that you see this growing concentration of wealth in the U.S. over the past generation, so I decided to do what I've done before and take the Walton family — which, when you combine them, is the single-wealthiest unit in the Forbes 400 — and say, How much more wealth do they have than people at the bottom of the wealth distribution [system] in America.

And, basically, if you line up people from the least-wealth to the most ... you get to about 42.9 percent, over 50 million American families, you'd have to add up, starting from the bottom, to get to the combined net worth of the Walton family, which was just under $145 billion in 2013.

Now, there are folks who have quibbled with that method, right?

Some people have a problem with that calculation because you do have a lot of people in the U.S. with negative net worth — about 11.5 percent of families — and it's true that some of that negative net worth can is actual financial distress (like someone who's underwater with their house) but it also can be someone who just got out of Harvard Business with some student debt but they've got a high-income job and they're going to be OK.

To deal with that, I looked at the typical household — the person right in the median. (They've got less wealth than half the country, but more wealth than half the country. Just about $82,000 is the median net worth in the U.S. economy.) And I looked at how many of those typical families would you have to add together to get to that $144.7 billion that the Waltons have; and that number is about 1.7 million.

So you'd basically need a city's worth of typical households to add up to that Walton family number — and that number, the amount of typical families you'd have to have to get to the Waltons — has just risen pretty steadily over time.

I remember that at least one of the times you did this before, conservatives responded by focusing on that negative worth figure and arguing that it rendered the whole exercise kind of pointless. I was never able to really understand why they reached that conclusion — but obviously you wouldn't agree. Can you tell me why you think it's a mistake to dismiss the negative net worth people entirely?

Well, it's true that there's a lot of people with negative net worth in the U.S. economy; and it's also true that there's probably a pretty good set of people who have negative net worth in any given year who are not distressed ... There really are some med school graduates who are still in the first 5 years of their career and have student loans that look crushing — until you realize they're going to be making a very, very high salary for 30 years.

That said, you also have people who have negative net worth because they're in genuine financial distress. The clearest evidence of that is that when the housing bubble burst, that number of people with negative net worth really jumped up. Most of that increase was people being underwater on their house and that's really not a great situation for anybody to be in. So I'm reluctant to throw out everyone with negative net worth and go, "Eh, they're not suffering." Some of them are not suffering, some of them are, and it's tough disentangle which is which.

But I think you solve that, mostly, by hopping to median wealth holdings and looking at how that median compares to the Walton family fortune. ... And there's no particular good reason why that median wealth going down — and it's gone down since 2007 — isn't an unproblematic thing. I guess you could argue that if we were getting a lot younger as a society (young people tend to have less wealth...) but in fact it's exactly the opposite: We're getting older as a society, so you would actually want the typical household to save more, because they're getting closer to retirement.

So I understand the point on negative net worth ... but we absolutely know that the median wealth-holder in the U.S. should not be seeing their wealth decline as we're getting older as a society.

I think the broad contours of inequality in recent American history are becoming pretty well established — a relatively egalitarian economy from the end of WWII to the early '70s, with skyrocketing inequality ever since — but I'm not sure the way the Great Recession has contributed is as widely understood. What role did the Great Recession play, or is still playing, in this dynamic?

It clearly made it worse because if you look at the wealth typically held by the median household vs. the wealth held by those at the top, people in the median, most of their wealth is tied up in their house. People at the very top, lots of their wealth is in financial assets, like stocks. From let's say 2007-2010, stock prices and home prices fell a ton; but stock prices have essentially come back since then [but] home prices have not.

So that wealth vehicle for the typical household has not returned to pre-recession values whereas stocks have, and I think that's been a big driver of ... exacerbating that long-term trend towards inequality.

While the data available to you now when it comes to measuring inequality is better than it used to be, it's still the case that there's a lot you don't know, right? I ask because I've read some people say that the super-wealthy — I'm talking about the global .01 percent or so — are potentially even wealthier than we know, because we can't get their information. Is that true? Could this be even worse than it looks?

Yeah, there's definitely a possibility. It's true that reliable data on the very, very wealthy is a little hard to get.

The Fed study is remarkably labor-intensive; they take 3 years to do it, it's incredibly carefully made, and even they, I bet, would say it's a real challenge to get high-worth people to actually submit to being surveyed on this. And then when you get other things, like the Forbes 400 ... thinking that you've reliably tracked down everybody's assets strictly through public records — when a lot of wealth is in the form of privately-held companies and things like that — I could certainly believe it could be worse.