Bill Maher and the liberal conundrum: Progressives, religion and extremism

Which side is the liberal one in this debate? Perhaps the better question is where we might find common ground 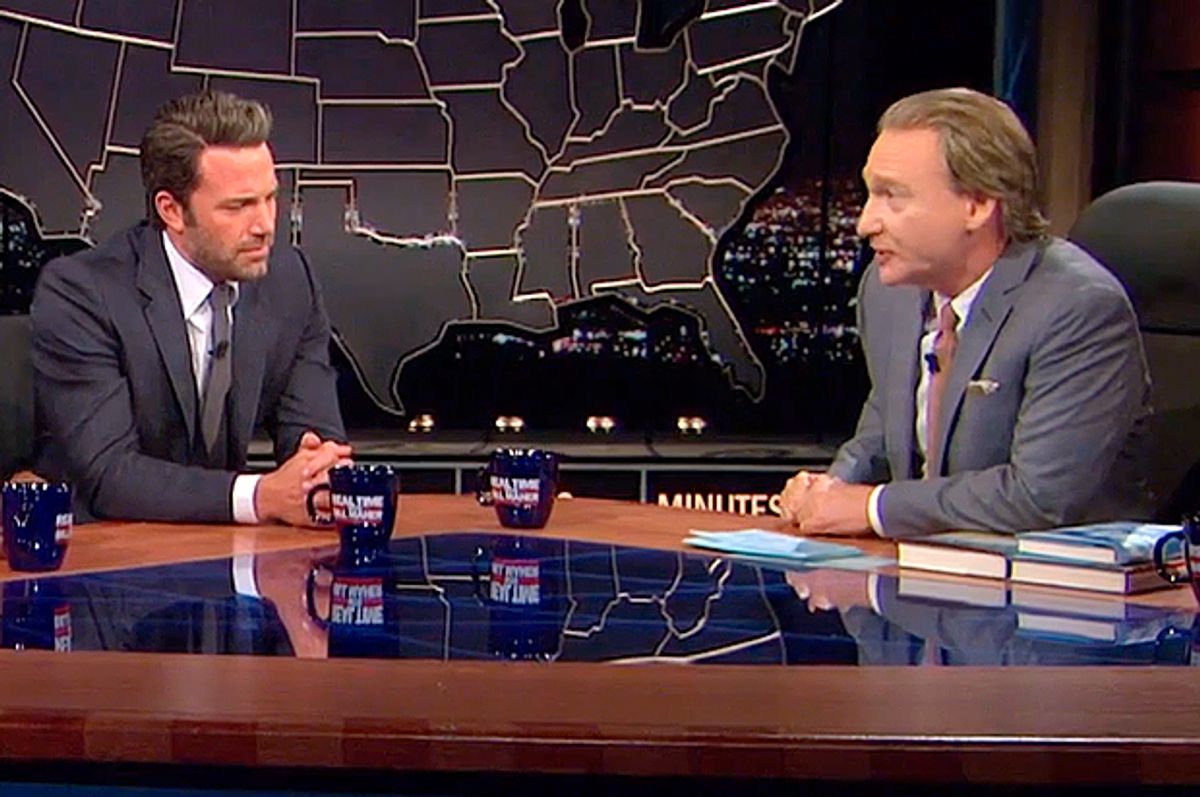 Last week on HBO's "Real Time," Bill Maher and Ben Affleck got into a heated debate on Islam that instantly went viral.

Maher, the outspoken comedian and unabashed atheist, took the controversial stance that Islam itself is a religion of "mafia-style" violence that "has too much in common with ISIS" and demands criticism for its anti-liberal views toward women, gays and "non-believers."

Affleck, the Boston-bred movie star and fellow liberal, loudly denounced Maher as "gross" and "racist" for stereotyping a religion of 1.5 billion people.

In the week since, op-ed columnists, television hosts and everyone in-between have taken out their proverbial knives and verbally crucified both Maher and Affleck, depending on which side of the argument they support.

Reza Aslan, a well-known Muslim scholar, wrote in The New York Times that Maher "lacks sophistication" and his use of blanket anti-Islam statements amount to nothing more than racist bigotry, a sentiment also shared by Max Fisher of Vox.com.

In turn, many others across the ideological spectrum have rushed to Maher's defense. In a bizarre case of strange bedfellows, Fox News host Bill O'Reilly not only agreed with Maher's criticism of Islam but went on to say that ISIS would behead Affleck "in a second" if they had the chance.

In addition, while taking issue with Maher's oversimplification of Islam, CNN contributor and Washington Post writer Fareed Zakaria agreed that "Islam has a problem today" and within the religion exists a "cancer of extremism."

But while both sides of the argument view the debate in largely black and white terms of one side being wrong and the other right, very few have taken a nuanced approach that journeys into the uninhabited gray area.

Two of the most fundamental, guiding principles of Liberalism are tolerance and equality.

From a very young age, liberals are taught to respect others no matter their religion, skin color, class, race or sexual orientation. We are also raised to believe that everyone is equal and that we must walk a mile in someone else's shoes before passing judgment.

In addition, we are taught to defend those who are less fortunate and stand up to bigotry, racism, sexism or any other type of "ism" which goes against the well-founded tenets of Liberalism.

While these principles sound like an easy enough blueprint to follow, they become muddied when contemplating certain issues in today's complex, modern world.

One of those issues is Islam.

On the one hand, liberals respect and embrace the Muslim religion because we pride ourselves on being tolerant of others. We may not fully understand the complex history and traditions of Islam, but we are careful not to criticize or stereotype the religion as a whole.

However, on the other side of the coin, liberals are incredibly uncomfortable with many anti-democratic, anti-liberal aspects of Islam. We can't stand seeing women forced to wear burkas from head to toe, devoid of the freedom Western women enjoy. We cringe at the thought of Muslim women being married off at such a young age and then forced to stay in the house, unable to leave without being accompanied by a man, unable to get an education, hold a job or drive a car.

We find certain practices like the stoning of women for adultery completely beyond the pale. We condemn the outward repression of gays in the Muslim world. We find it absolutely abhorrent that a majority of Muslims agree that those who leave the religion deserve to die. We shake our heads at the fact that in 2007 a Swedish artist received death threats for drawing an unflattering cartoon of Muhammad.

However, many liberals choose not to project these criticisms outwardly because we are fearful of being branded racist or Islamophobic.

As a result, many liberals (myself included) find themselves at a crossroads when grappling with how to approach Islam.

Maher and Affleck's debate was so interesting and controversial because it highlighted the liberal divide on Islam, an ideological splintering rarely discussed in public, let alone on a major cable television station.

While the debate has succeeded in breaking through to the mainstream and fostering a larger conversation on Islam, it has also been somewhat destructive because many pundits and columnists have vilified one side or the other without really listening to the conflicting argument.

Affleck is right that it is wrong to stereotype a religion of 1.5 billion people as ISIS-sympathizing extremists. That type of thinking will only inflame tensions and hatreds between the East and the West and does nothing to reconcile the differences of opinion.

However, Maher is also right that there are many tenets of Islam that go against liberal ideals and deserve criticism and scorn, most notably the anti-democratic treatment of and intolerance toward women, gays and non-believers within the Muslim world.

On the one hand, liberals are right to champion Affleck's condemnation of Maher's dangerous oversimplification of Islam. However, we must also not let our desire to be tolerant and politically correct silence us from speaking out against certain aspects of Islam that go against the most fundamental principles of Liberalism.

Yes, it is Islamophobic to say that Islam is a religion of violence and extremism, because it is not. There are 1.5 billion Muslims on planet Earth and the vast majority are peaceful and respectful. Only a small minority are terrorists and jihadists. ISIS and Al-Qaeda do not speak for all of Islam, just as the KKK or Westboro Baptist Church do not speak for all of Christianity.

However, liberals must be reminded that it is not Islamophobic to condemn specific parts of Islam that discriminate against women, gays and non-believers.

In the end, championing one side of the argument while completely dismissing the other is not constructive. It only serves to silence the furthering of a conversation that will lead us to progress between Muslims and non-Muslims, something we desperately need in today's world.

There is a way to stay true to liberal ideals while also remaining respectful to Islam.

And although the formula can't be derived on a 60-minute TV show, at least it's succeeded in starting the conversation.

Josh Appelbaum writes about politics and current events on his blog, The Postmodern Witness. Follow him on twitter @bostonsboy87.