"We knew it was wrong…For whatever reason, it just kind of got glossed over," the 30-year league vet told USA Today 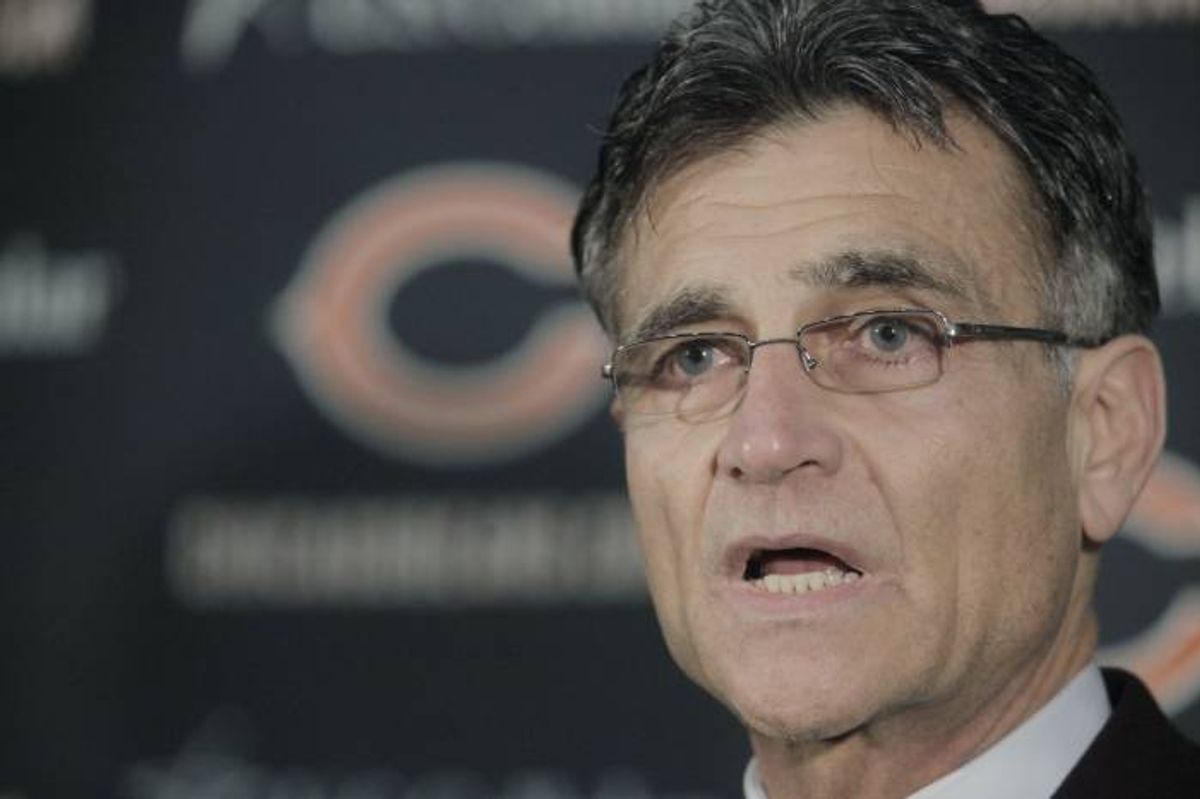 Chicago Bears general manager Jerry Angelo talks to reporters during a news conference at Halas Hall, Tuesday, Jan. 5, 2010 in Lake Forest, Ill. after the Bears deciced to bring back head coach Lovie Smith for a seventh season despite a 7-9 record this year and three straight seasons of missing the NFL playoffs. (AP/M. Spencer Green)
--

Update, 2:45 PM Eastern: Jerry Angelo, the former Chicago Bears general manager who reportedly told USA Today that NFL teams had covered up a massive number of domestic violence cases during his three decade tenure at the league, told CNS Chicago on Friday that his comments were "twisted" by the interviewer. "That ‘hundreds and hundreds’ was taken totally out of context," Angelo said. "When I was making a point to this person, I was making a point that over my 31 years in the National Football League I’ve seen a lot of changes. There were hundreds and hundreds of things over those years that I’ve seen that have gotten better. Domestic violence is one of those." As Deadspin points out, Angelo's clarification makes logistical sense given the limited likelihood that such a huge number of domestic violence cases could be covered up successfully over such a span of time. But the correction also has an important corollary that does not absolve the NFL: Angelo's comments still imply that the league did cover up illegal or problematic actions -- it's still a big issue that we don't know what they were, or if the league has truly changed its ways.

A former NFL executive told USA Today that during his 30 years with the league, teams covered up "hundreds and hundreds" of domestic violence cases, preferring to "handle them internally" by looking the other way. Jerry Angelo, former general manager of the Chicago Bears, expressed remorse over his role in protecting domestic abusers, all the while praising NFL commissioner Roger Goodell for his integrity -- despite Goodell's apparent failure to address players' intimate partner violence without public scrutiny.

"I made a mistake,'' Jerry Angelo told USA TODAY Sports. "I was human. I was part of it. I'm not proud of it." He added, "We knew it was wrong… For whatever reason, it just kind of got glossed over. I'm no psychiatrist, so I can't really get into what that part of it is. I'm just telling you how I was. I've got to look at myself first. And I was part of that, but I didn't stand alone.''

According to Angelo, the typical response to a domestic violence incident was for team leadership to inquire if everybody was "OK," then promptly move on. The motivation, he says, was linked directly to teams' desire to keep players on the field and win games. "Our business is to win games," Angelo said. "We've got to win games, and the commissioner's job is to make sure the credibility of the National Football League is held in the highest esteem. But to start with that, you have to know who's representing the shield."

Angelo went on to suggest that Goodell "would never cover anything up," specifically with regard to the Ray Rice domestic violence scandal that came to light last month. In February, Rice was arrested for allegedly assaulting his then-fiancée, for which Goodell suspended him for just two games. When video footage of Rice knocking his partner unconscious surfaced in September, however, public outrage forced the commissioner -- who has maintained that he never saw the footage before it was released -- to suspend the player indefinitely from the league. Law enforcement officials contend that they sent the incriminating footage to the NFL in April.

Goodell, who has faced calls to resign since the Rice incident, detailed the league's updated personal conduct policy and standards for addressing domestic violence at the NFL owners' meeting earlier this week, with additional changes expected to be announced before the Super Bowl. Clearly, a reorientation is needed because, as Angelo put it, "We got our priorities a little out of order."