Who is Thomas Perez? A look at the reported frontrunner to be the next attorney general

A new report says the labor secretary is the favorite to succeed AG Holder. Here's what you need to know 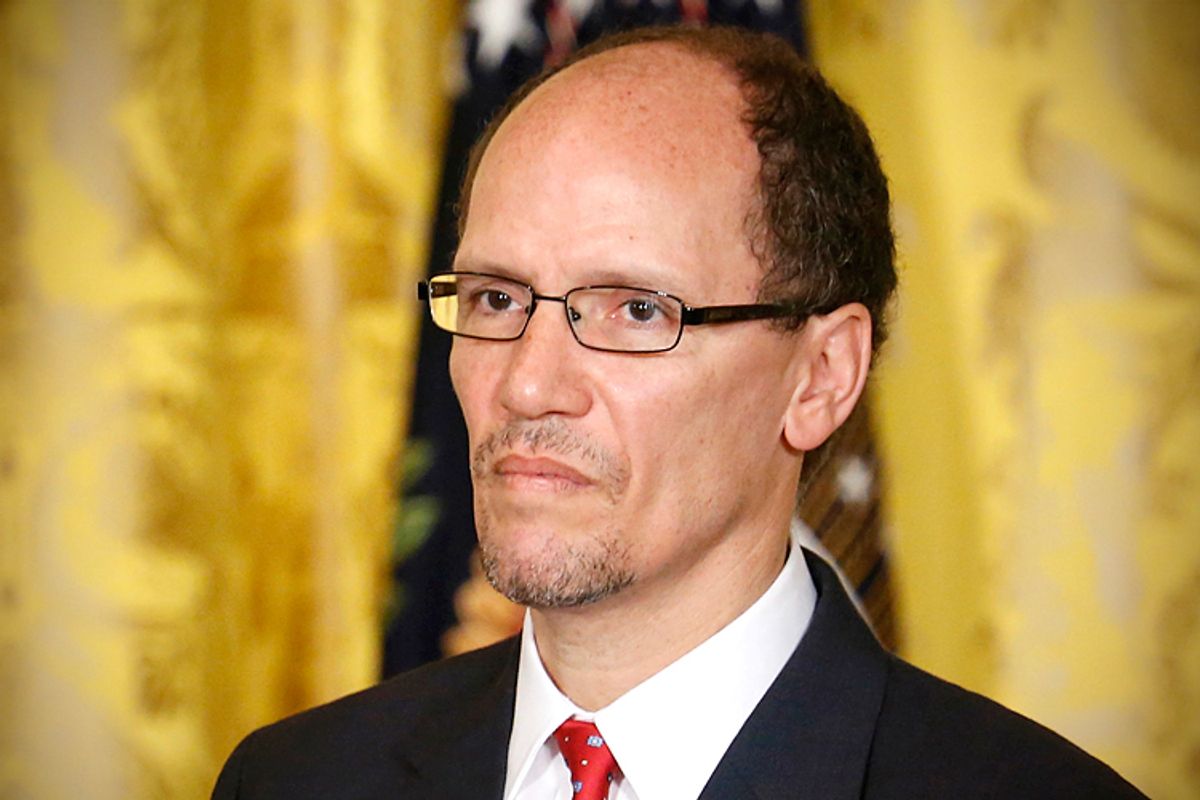 The New York Times reports this morning that Labor Secretary Thomas E. Perez is the odds-on favorite to succeed outgoing Attorney General Eric Holder, and that President Obama is “poised” to make the announcement before the midterm elections on Nov. 4.

Perez took the helm at the Labor Department only 15 months ago, but his extensive Washington experience and civil rights background have propelled him to the top of the White House’s short list. The Harvard Law School graduate and onetime special counsel to Sen. Ted Kennedy led the Civil Rights Division of the Department of Health and Human Services during the latter years of the Clinton administration. After an abortive attempt at seeking Maryland’s attorney generalship, Gov. Martin O’Malley appointed Perez the state’s secretary of labor, the job he held before his confirmation as chief of the Justice Department’s Civil Rights Division in 2009.

Perez’s Justice Department tenure helped make him a progressive favorite. The Civil Rights Division led the department’s challenge to voter suppression measures, with Perez citing voter identification laws’ disproportionate impact on minority voters. After the 2012 shooting death of unarmed teen Trayvon Martin, Perez traveled to Florida to meet with Martin’s family and was integral in opening the Justice Department’s civil rights investigation into Martin’s slaying. In another high-profile civil rights investigation, Perez issued a blistering report on the tactics of anti-immigrant Sheriff Joe Arpaio of Maricopa County, Arizona, noting that one expert called Arpaio’s heavy-handed operations "the most egregious racial profiling in the United States that he had ever personally observed.” Perez also oversaw the division’s fight against predatory lenders, hate crimes and anti-LGBT bullying.

Tapped to lead the Labor Department in March 2013 after Secretary Hilda Solis’s departure, Perez was confirmed by the Senate four months later in a 54 to 46 vote. At Labor, Perez has backed the push to raise the minimum wage and overseen new protections for domestic workers. His tenure hasn’t been without controversy, however. While the department announced this summer that it would extend workplace non-discrimination protections to transgender workers under existing sex non-discrimination policy, the move came only after Perez had punted on the issue amid persistent questioning from advocates and reporters. Meanwhile, the Congressional Progressive Caucus has called on Perez’s department to take more robust action to combat wage theft.

It isn’t clear that the Senate will vote on any attorney general nomination prior to the start of the next Congress in January, even if President Obama announces his pick well in advance. Given the closeness of Perez’s last confirmation vote and the certainty that the Senate will at least be more evenly divided come January, the administration will have little margin for error if Obama selects Perez.